Hello everyone; once again it is I, Chess the purebred border collie, here to pretend like something interesting happened in the garden today, even though nothing really did. You may remember me from such posts as “Bunnies On The Grass, Alas” (where I showed I’d read Gertrude Stein), and “Life With A Nut”, where I talked about the guy I live with.

Here I am in a completely uncharacteristic pose. I think I look like a complete doofus. 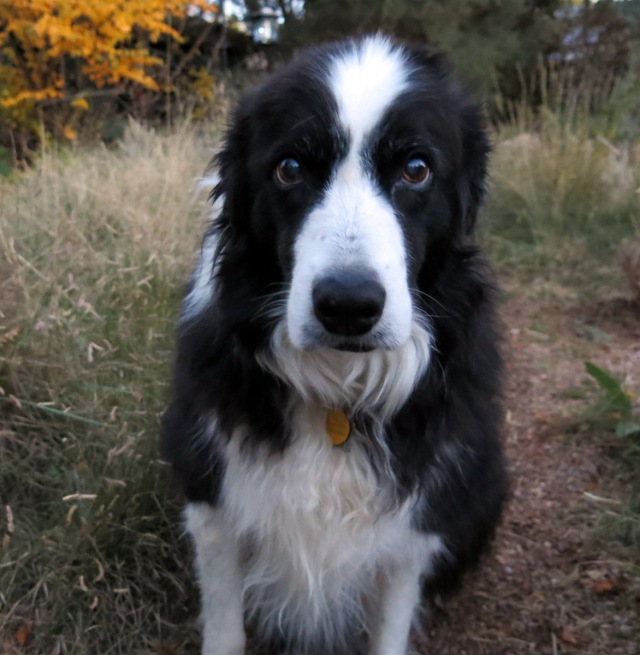 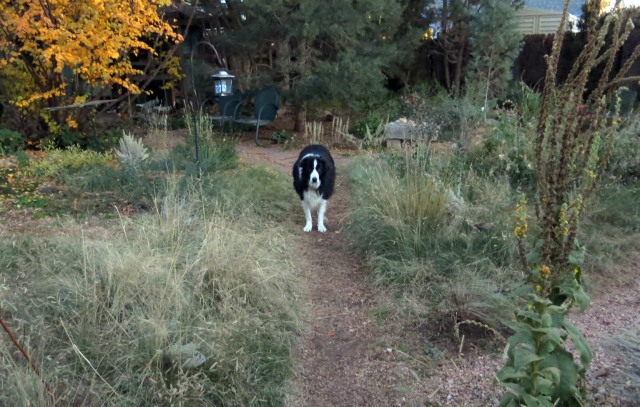 to see what the guy I live with was taking pictures of, after a whole day of him sawing and drilling, and he took pictures of me when I got close, and saved the one where I look like a doofus. He’ll have to make up for that, big time, in future posts.

You can see the birch, our native one, Betula occidentalis (the guy I live with says that’s what Flora of North America calls it, instead of B. fontinalis), in the upper left of the picture. It turns a nice yellow at this time of year, but the yellow doesn’t last very long. Early in the morning the leaves fall down, silently; it’s kind of spooky.

(The reason the green star thing is leaning is “because it’s leaning”, according to the guy I live with. It’s kind of like living with Mister Science, isn’t it?) 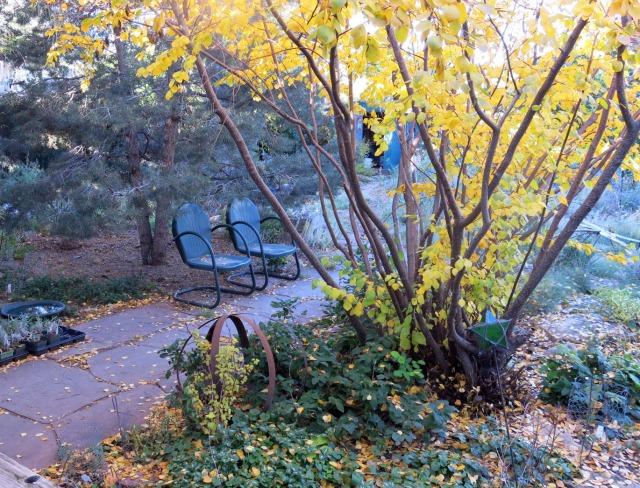 Here’s the birch looking from where I was standing when I got my doofus picture taken, almost at dusk. It’s a big shrub, not a tree. 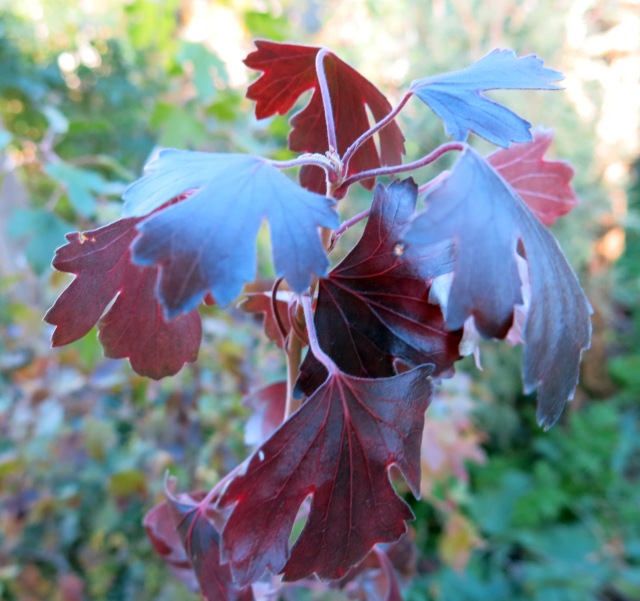 As I say, the guy I live with spent most of the day sawing and drilling. He left me alone for a while to go get some compost and Yum Yum Mix for “the new rock garden”, and dug that in before he started sawing and drilling, and so now the pile looks like a bunch of mine tailings.

It was because the sand smelled weird, he said, like diesel fuel or something. It might just have picked up the smell from being wet, but the guy I live with says the compost plus the Yum Yum Mix will clean it all up in a couple of months. “Microbes”, he said. The ratio of sand and gravel to compost is about 20:1, if you were wondering. So it’s technically still a mineral soil, which I know will come as a huge relief to everyone.

I guess that’s really all. It was a pretty nice day even though the guy I live with was working around the northeast corner of the house, out in front, so I don’t go there, but I tried to stay as close as possible anyway. We might show pictures of the new arbor when it’s done, and then again, we might not. “It’s just an arbor”, he said, which is funny, because it’s made of trees, but isn’t a tree. (You know, arbor.) Nothing will grow up it, it’ll just be there, kind of like we are, usually. Just there.

idle
View all posts by paridevita →
This entry was posted in Uncategorized and tagged Betula occidentalis, Ribes aureum. Bookmark the permalink.

8 Responses to more sawing and drilling