Greetings and salutations everyone; yes, once again it is I, Chess the purebred border collie, here to be both amazing and delightful at the same time. You may remember me from such posts as “Left Alone” and “Left Alone” among so many others, most of which have a distinct title, except for these two. I was left alone twice, and felt I had to say something about it.

Here I am in a characteristically semi-pensive pose, not wanting to have my picture taken but sitting still anyway. If it looks like I could use a cuddle, it’s because I could. I admit I get a lot of cuddles, but I could always use more. 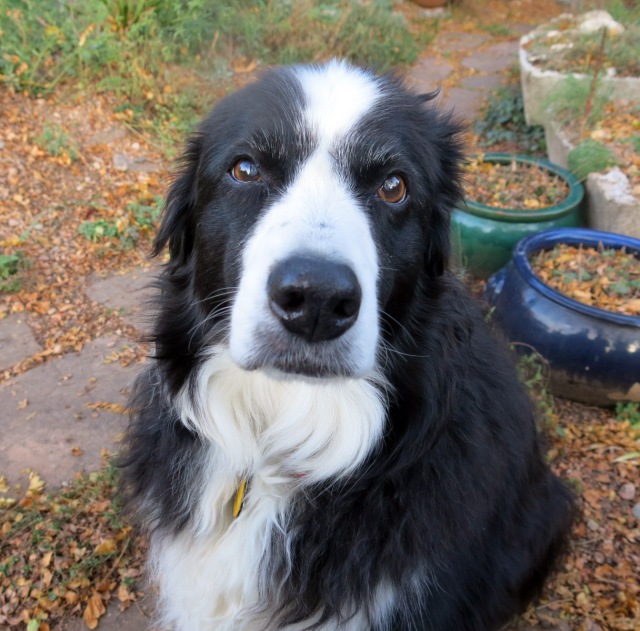 He fixed the downspout from the gutter just today; it split apart last winter after many winters of providing excellent downspout service. He filled the cracks in the patio which appeared a couple of winters ago. He started to put up an arbor on the northeast side of the house, to mirror the one that my mommy built on the southeast side, and he’s working on fixing the fence in “the enclosure”, a little area in the back that my mommy built for herself, with a bench to sit on, with a certain border collie whom you all know. Sometimes my buddy Slipper would hog the spot and I would sulk, because the spot was really for me.

This is the fence. We’re facing north-northeast in this picture, and you can see, more or less, that watering on the other side of the fence, which is the “way back” garden, has caused the fence to rot and fall apart. He pushed on the fence from the other side and it almost fell over, so he decided it was time to fix it.

You can also see there’s a whiskey barrel on the right. It just sits there. A lot of things around here just sit there, doing nothing. The guy I live with just sits there, a lot, but sometimes, like in the last few days, he gets up and starts to fix things.

He wandered through the garden and took some pictures of plants, which the garden still has. I guess we have to say that now. That’s because the guy I live with has been reading about all these postmodern gardens where plants have no place, which he says is just completely weird, and he doesn’t know why everything has to be so weird these days. I’ll show some pictures to prove the garden has some plants in it.

Sphaeralcea ‘Desert Sunset’ is still blooming. I know about this plant because half of what the guy I live with insists is a “lawn” is taken up by it. We used to have a nice, soft green lawn that I could stretch out on, but he decided that wasn’t progressive enough, so out it went. I mostly stretch out on the soft Pottery Barn sheets on my bed, anyway. Everything evens out, I guess.

And the crocus. This is Crocus kotschyanus HKEP 9317 again. (He just saw HKEP 9322 coming up this evening, and he was very excited.) He likes plants with numbers. Some people think this is peculiar, but he says that’s their problem.

As he was raking leaves off one of the raised beds, he noticed Crocus oreocreticus. This doesn’t have anything to do with cookies; it comes from the mountains (oreo) of Crete. He still thinks of cookies, though.

Well, that’s it for tonight. Tomorrow the guy I live with is going back to Home Depot, he says, for more lumber. That means more sawing and drilling. And of course, coming inside to give me a biscuit from time to time, and drink coffee, and look really busy.