Greetings everyone; believe it or not, once again it is I, Chess the purebred border collie, here to bring you the latest and greatest news from the garden, and, today, be the subject of some rather ridiculous pictures. You may remember me from such posts as “Something Completely Different” and “Life With A Nut”, among so many others.

Here I am in a thoroughly uncharacteristic pose. It looks like I just ate a lemon, but I didn’t.

And here I am again; another ridiculous picture. 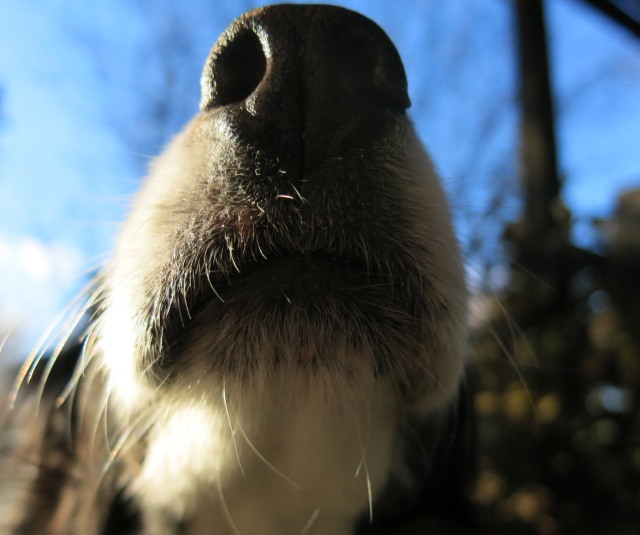 I don’t eat lemons, and I really don’t know why I’m subjected to such humiliations, but the guy I live with blames me for not standing still for my picture. I’m a border collie, as if he didn’t know, and we don’t like standing still when there’s work to do.

We had a rare visitor today. The guy I live with said that the visitor, who happened to be colored just like me, also would not sit still. Like he has control over the universe or something, which, of course, he doesn’t, and he knows that as well or better than lots of people.

We sometimes do see magpies but not that often. We saw them on our walk, when someone had left a couple of bones (the kind you get at the grocery store for dogs, but apparently not dogs like me, even though I’d like to gnaw on one right now, especially if it had a couple of pounds of roast beef attached to it) out in the field, and there were magpies and even a raven or two pecking away at them. They flew away when they saw me coming.

The guy I live with said that when he moved to Colorado, in 1961 (yes, they did have years way back then), there was a bounty of twenty-five cents on magpies. He never understood the reason and thought he had moved to another planet.

It was a really beautiful day today, good enough for both long walks and long naps. Aside from eating (though the Brie is all gone now), I think that’s about what a day should be, and not much else. Some gardening went on, namely in the form of raking, a little watering, and what the guy I live with claimed was a great deal of “serious thought” about the garden. I think that happened while he was taking a nap.

It’s been freezing just a little at night, and there are still quite a few plants in bloom, especially the Sphaeralcea ‘Desert Sunset’ which he took pictures of here, and the big blue stemmed rabbit brush whose name he doesn’t really want to know because most botanists disagree about the names of rabbit brushes, so he just calls it the big blue stemmed rabbit brush, but then he has to say the one that’s in flower, not the one that’s not.

He bought six plants of this for about a dollar each at a native plant nursery sale some years ago, planted four next door and two here. He doesn’t know why they bloom so late, but they do, and the guy I live with says that anything that blooms this late and doesn’t need a huge amount of water definitely belongs in his garden.

There are crocus too. Here is Crocus cartwrightianus ‘Michel’. 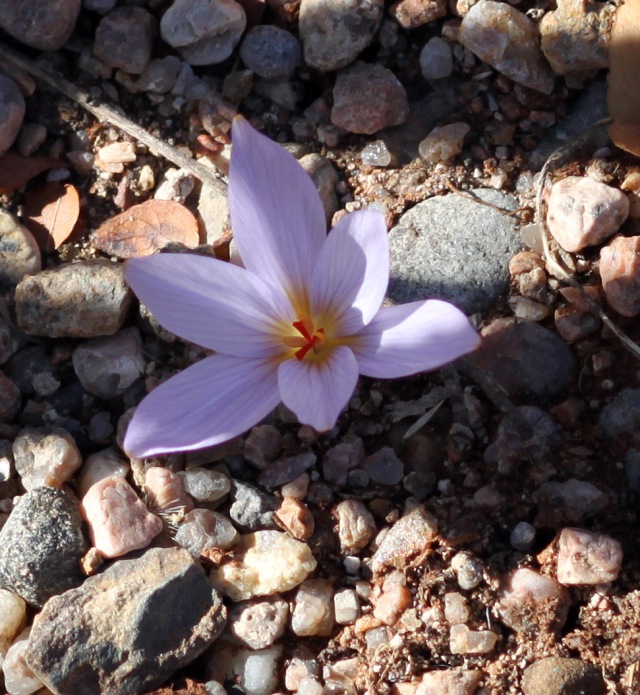 And a couple of Crocus speciosus. It looks like this’ll be one of those years when it blooms over a long period, rather than all of them blooming at once. The guy I live with insists that a lot were “done in by rodents”, but I wouldn’t be surprised if he accidentally sliced through them with a trowel planting other things.

I know I tend to ramble, but that’s what we purebred border collies do. I say I’ll get more focused about the time that the guy I live with does.

That’s really all I have for today. Until next time, then.

idle
View all posts by paridevita →
This entry was posted in Uncategorized and tagged border collies, Crocus cartwrightianus, Crocus speciosus. Bookmark the permalink.

4 Responses to a rare visitor