Hello everyone; one again it is I, Chess the purebred border collie, here to bring you the latest news from the garden. You may remember me from such posts as “Look What He Did” and “Big Flat Rocks”, among so many, many others.

Here I am in what the guy I live with claims is “the most characteristic pose of all”.

You can see that the snow hasn’t quite melted yet, which is why it’s so bright white and glaring in the living room. In case you didn’t know what I’m doing here, I’m performing one of my many duties in the house, namely, making sure that the carpet stays level. I know it’s clean, because it was just shampooed, but really, is it completely level? That’s my mission, to make sure it is.

The snow is melting fairly quickly. Here’s the guy I live with’s new sand pile under snow. He says, and I quote here, “If this isn’t exciting, then I don’t know what is.” It is indeed incredibly exciting. I think you can tell pretty easily that neither of us does very much.

Oh and by the way, not doing very much is hardly a bad thing. The guy I live with did stuff for almost thirty years, so that eventually he could do nothing. He says, and again I quote, “If other people want to do stuff, then let them, but leave me out of it.” What a remarkable philosophy, huh. People have said things to him like why doesn’t he get a job, to which he responds that he had a job, thank you very much, and that other people desperately need jobs, so they can have the one he isn’t going to get. He is very good at just sitting here. Or standing out in the garden staring at things. He read somewhere that happiness is defined as “being extremely busy doing the unimportant”. Substitute equanimity for happiness, and maybe we’ve got his philosophy down pat. And I make an excellent sidekick.

Like, in the first couple of years after he retired, when my mommy was still here, one of the things they thought was really important was who got to turn on the front porch light switch first. You couldn’t turn it on during the day, because that would be cheating; you had to turn it on at just the right time. The guy I live with won most of the time. My mommy would come up the stairs to turn on the light switch and it would already have been turned on, and the guy I live with would be hiding around the corner of one wall, snickering, and would then leap out into the room with a cry of triumph, like “Ha ha ha ha!”

I think I’ve gotten carried away here. I was going to show a picture of the sand pile.

And, this is the time of year when, someone said (so it must be true), that the number of Canada geese in the Denver metro area outnumber people. I don’t know who did the counting, but we do see a lot of them flying overhead and honking. The guy I live with says they’re probably telling each other to outnumber the humans. Well, and purebred border collies too, though some of us do earn a living herding geese off of golf courses and stuff. I’m retired, personally, like the guy I live with, and I check the carpet level for free.

Well, let’s see. Some plant pictures, maybe? The guy I live with just realized that one of his camera lenses did not have image stabilization, and that’s probably why the images didn’t come out stable, because he has arthritis in his fingers (though not so bad as my buddy Slipper, who got it when he was young, and figured out he could get up the stairs by going up backwards), and the camera shakes some, so he used a tripod with these. He’s kind of dangerous with a tripod in the garden. 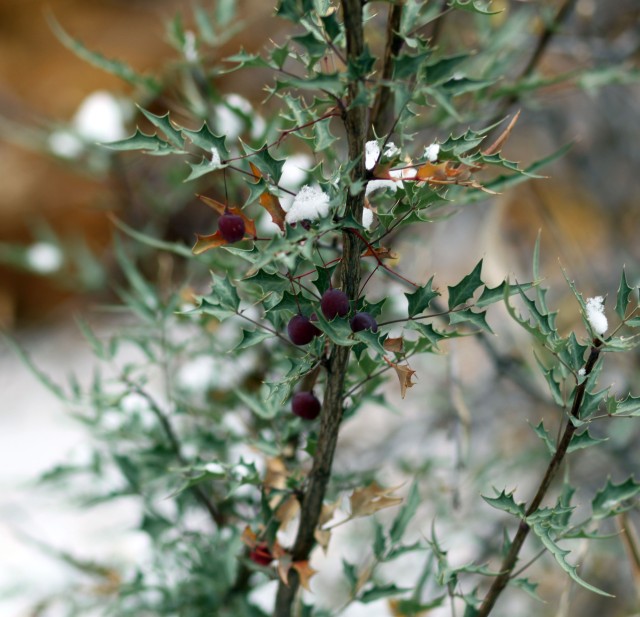 Those are the plant pictures. I agree, there could have been more pictures of me, but the guy I live with said, I think rather brusquely, that I would have to get up if I wanted my picture taken. This really isn’t the kind of day where you do much getting up.

The mahonia, and I think we already said that Intermountain Flora decided to retain the name instead of Berberis, is about as close to a seasonal holly type thing as I guess we can get. Various actual hollies have been planted here, with, as the guy I live with says, “entirely fatal results”. Other people around here grow them, so he blames the wind.

I sure can ramble, can’t I? Well, it’s been kind of one of those days, so I’ll sign off now.