Greetings and salutations, everyone; yes, once again it is I, Chess the purebred border collie, here to tell you the news from our garden. You may remember me from such delightful and informative posts as “A Partly Sad Story” and “Three Percent Humidity”, among so many others.

Here I am out in the garden, squinting because the snow is kind of bright. 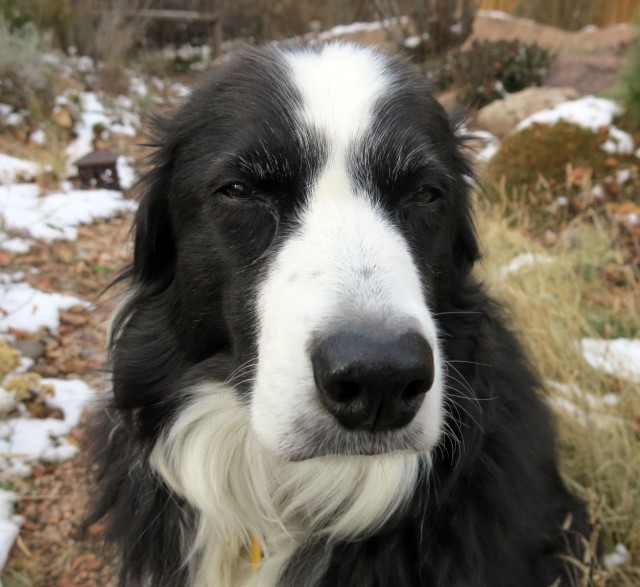 There really isn’t much to say today, but I bet I can make it sound like there is. Like when someone asked Yeats how he came to write a particular poem, and he responded “I made it out of a mouthful of air”, which is really great, and so maybe I can do the same thing.

First, though, I get to make fun of the guy I live with, at least some. You know the Tin Cat,

well, before I started taken phenobarbital (which I’m doing really well on, thank you), every time a mouse was “detained” in the Tin Cat I would completely freak out. Now I just sleep through it and it’s the guy I live with who gets awakened in the middle of the night by a mouse screaming for help. (The guy I live with spilled coffee grounds all over the kitchen floor and didn’t clean them up properly, which is what you see on the floor. Pretty disgraceful, I must say.)

So he gets up, carries the Tin Cat out to the garage, through the kitchen door

and lets the mouse (or sometimes mice) out into the garage, which is pretty chilly, but he leaves the kitchen door open, and so where do the mice run, but right over him with their tickly little feet and back into the warm kitchen. Makes you wonder who’s smarter, huh.

Maybe not that interesting. ‘Alba Everblooming’ is also blooming, like the name would suggest. But what is interesting is that Gentiana verna is still blooming, and just look at the picture.

Pretty cool, in more ways than one. The gentian is very blue.

Let’s see, what else? Oh, the big metal chicken still hasn’t flown away. It doesn’t quite add the class to the garden that a purebred border collie does, but it does give it a certain something. He also found the metal dragonfly that he thought had disappeared, too. You can see it next to the chicken, just sitting there because he’s still fixing the fence on which it was mounted. The sickle (the handle thing) underneath is super-vintage. Like, really old. 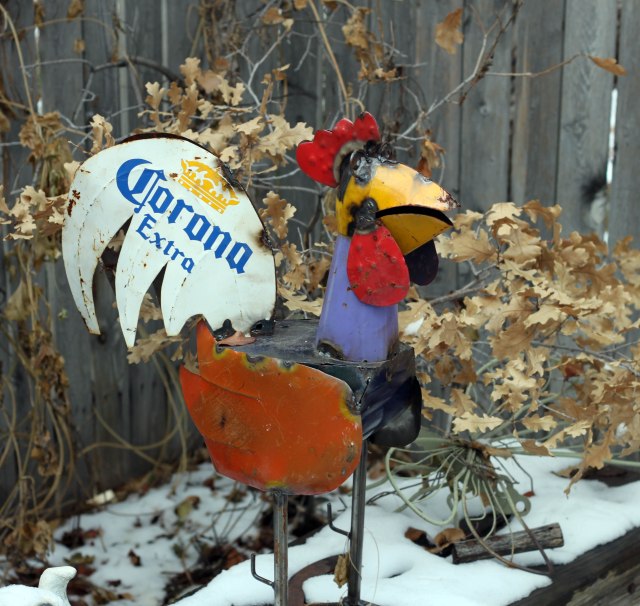 I’m almost done. Here’s a little group of photos featuring me, to make this post really exceptional. In case you were wondering if your rock garden would be improved by having a purebred border collie in it, you can see the answer is yes, totally. This is me walking down the paths. My tongue might be stuck out in the first one, but you can see what the garden looks like today. I stay on the paths, of course. They were partly made by my Uncle Pooka, and then by my buddy Slipper. 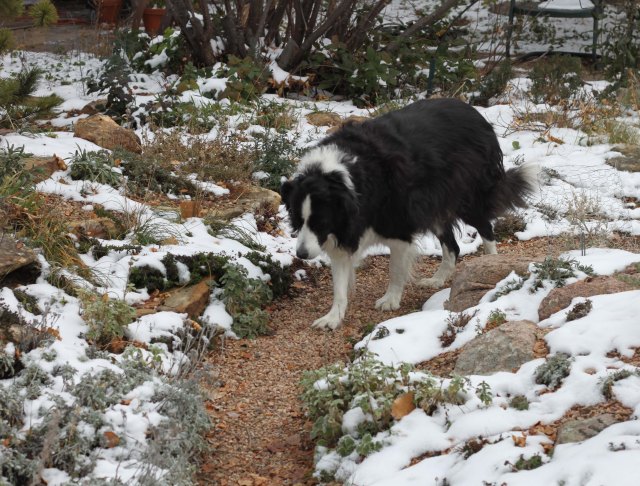 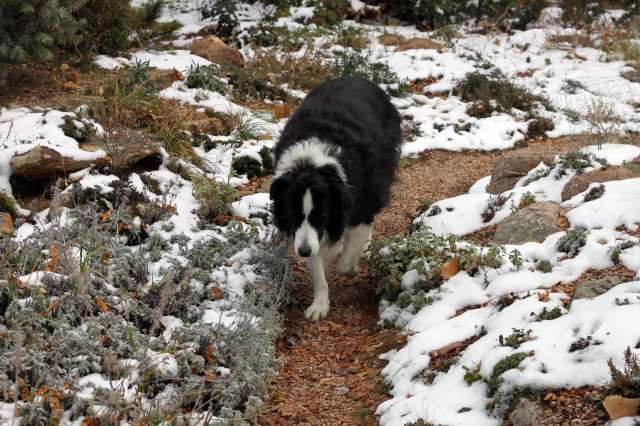 We had an okay day today, though today does mark four and a half years since my mommy left us.  So I thought I’d show a picture. That really is the guy I live with on the right. They were at the Renaissance fair.

Anyway, that’s all there is for today. I hope you enjoyed all the pictures of me as much as I enjoyed making them. The guy I live with says posts with nothing but pictures of me might be pretty boring. I can hardly see how that could be true. But the gentian picture was good, too.

14 Responses to in the snow