Hello everyone; yes, indeed, once again it is I, Chess the purebred border collie, here to tell you the latest news from our garden. You may remember me from such riveting posts as “After The Solstice” and “A Day Without Antlers”, among so many, many others.

Here I am in a characteristic pose. I’m watching the guy I live with fill pots with soil-less mix. He’s sowing more cactus seed. I know that comes as a shock.

It was really windy last night. I mean really really windy. And it didn’t freeze. We woke up kind of late, which wasn’t my fault, and it looked like it was going to be a nice day, which it was for a while, but now it’s snowing. The guy I live with says it’s always snowing here, but, you know, he tends to exaggerate.

He tried to take a picture of the hawk which he claimed was as big as I am, but this is the only picture he got. He says the hawk flies away when it hears the camera being turned on. I somehow doubt that. 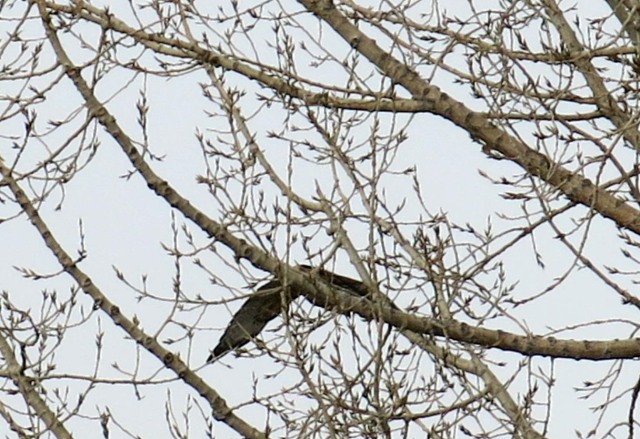 I’ll show a few garden pictures now, since he took some. I think just to show that the garden isn’t always completely covered in snow at this time of year. “Yes, well, it will be tomorrow” is what he says. This is looking over the rock garden, to the sand pile, and the new fence, which really is as slanty as it looks. He put it up, so, say no more. He says we won’t be able to see it after a while. 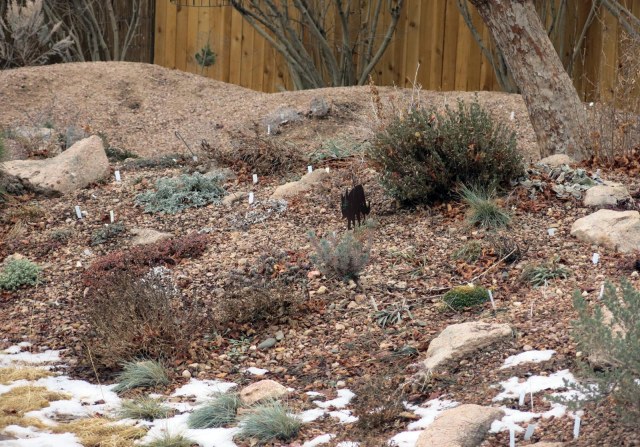 The burlap covers are for plants of Yucca rostrata, whose leaves, he says, were cooked by the reflection of the sun off the snow, last time, or time before last. They’re only yellow in the middle, so that’s what he says happened.

The other burlap thing, the scary thing, is a Cedrus atlantica ‘Glauca’, which seems fairly fine to me, but the guy I live with felt it necessary to make this creepy burlap thing, maybe to ward off snow or something. It isn’t working, and it’s creepy. I’m afraid it’s going to stand up straight and then come after me. If it went after the guy I live with, that would serve him right.

A view of “Mount Zot” and the troughs and stuff. Don’t ask me why it’s called Mount Zot. It just is.

The lawn. It used to be called “The Great Lawn”, when it was a green lawn, but now it isn’t; it’s just called “the lawn”. The guy I live with says he’s going to pile a whole bunch of pea gravel and sand right in the middle of it. I can hardly wait.

The “way back”. It’s lower than the rest of the garden….no, I’m not going to call it “the estate” like he does, because that sounds silly….and so water from both paths flows down here. As you can see. That’s me, there, dressed in black and white. I don’t have gardening clothes. 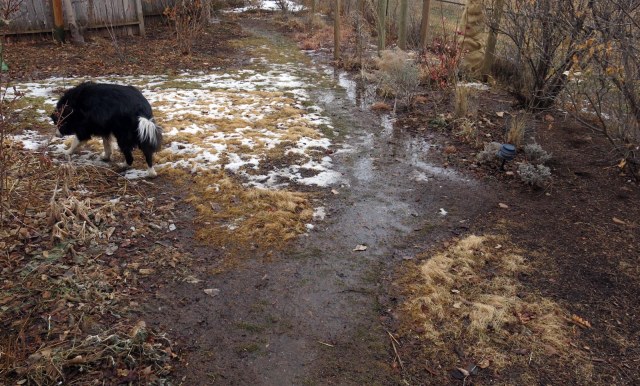 Another view of the same place. The fence my mommy built is leaning, and the guy I live with is working on fixing it. No, really, he is.

The reason I’m not in this picture is that I walked up to the guy I live with, because I like him a lot, and so he took a picture of my nose. Neither of us can remember how I got that scar, though the guy I live with does remember my mommy being unhappy about it. I’m still practically perfect, though.

Oh. Here I am going on about things, and haven’t explained the title of today’s post. I wasn’t being mysterious, I just got carried away. Like you do, sometimes.

This is what went on today.

Like I said earlier, he filled a bunch of pots, so he could sow some cactus seed. In case you were wondering if he cleans the pots or anything, this is what they look like, and how they looked when he filled the pots.

In other words, no. The filled pots did have hot water poured over them. These are going inside, under lights, after the seed is sown. “And anyway”, he said, “the pots are being filled with dirt, so why wash them?”

He has over thirty forms of echinocereus to sow. Some different species, but mostly Echinocereus reichenbachii. He said that the name is either derived from the Greek echinos, hedgehog, or the Latin echinus, sea urchin. I have a hedgehog, named Nedgehog, for one of my toys. I don’t have a sea urchin, though. The guy I live with says you can get sea urchin at a sushi place, but he’s never had it. He doesn’t go out for sushi any more.

Anyway, he says the Oxford English Dictionary says you can pronounce this e-chi-no, with a long I, and a K for the CH (“of course, since it’s Greek”), or eck-i-no, with a short I. Depending, I guess on which language you thought it came from. Or something. (This is rapidly getting less interesting to me.)

The funny thing is that according to the guy I live with, echinus is also the Latin for dishpan. He was quick to point out that he didn’t think they named the cactus because it looked like a dishpan. Whew, huh.

Is that it? I think so …wait, no, there’s one other pretty dumb thing. Talking about pronunciation and stuff, you know how the guy I live with goes on and on about the correct pronunciation of agastache…..well, he says to show these, so I guess I will. He found one online when he was looking for something else entirely.

The first one is from Britton and Brown, Flora of North America etc., published about 1924.

The second is from A California Flora, by Munz.

Now what? This hasn’t been all that interesting to me, and maybe it’s the same for everyone else, so why not finish this post with a picture of me? That always seems to help lighten the mood.

This is me, when I was one and a half, sitting in the chair downstairs. Yes, I know, the “horns”, but just pretend they’re angel horns or something. I forget what I was looking at, since it was such a long time ago. Maybe my buddy Slipper was trying to sneak up on me. Anyway, this should do for now.

idle
View all posts by paridevita →
This entry was posted in Uncategorized and tagged agastache pronunciation, echinocereus. Bookmark the permalink.

8 Responses to hedgehogs and dishpans