Greetings and salutations, everyone; once again it is I, Chess the purebred border collie, here to bring you the very latest news from our garden. You may remember me from such wonderful posts as “Caught On Film” and “Baffled Again”, among so many, many others.

Well, some things have been happening, besides lots of mice running around on the patio. The guy I live with has been taking advantage of the spring-like weather to move some plants around (he says that keeps them from getting too large), and doing a bunch of other stuff that may make more sense to you than it does to me.

Today he moved two small plants of Salvia dorrii which were growing unhappily in the front yard, and planted them in the sand pile. I know this doesn’t look very impressive at all.

According to Hugh N. Mozingo, writing in Shrubs of the Great Basin, Salvia dorrii is not the “purple sage” as in “riders of”; the guy I live never read any Zane Grey anyway. He, that is, the guy I live with, says the sage will be happier growing in sand. Whatever, huh.

And since the guy I live with recently declared that he was taking the garden in a completely new direction (downhill, probably), the last of the tiny green lawn out in the “way back” is being removed. Buffalo grass on the left.

A lot of people say to spray the grass with herbicide and do this and do that, but the guy I live with says scraping up the grass with a spade is “the right way” to do it; then you sow the seed, and cover that with a sprinkling of soil, and then burlap, held down by landscaping pins. Isn’t this attractive?

The pins are there to make the burlap pretty taut, so I don’t trip over it, which is a good thing, and the pins will be removed next year, or later this year. Since the seeds will eventually be watered (though, again, not as much as people say they need to be, because of the burlap), the burlap will rot almost completely after a year.

Oh, he finds the old landscape pins with one of those magnet extender deals they use for car repair, to pick up dropped stuff. He used it a lot back when he worked on cars.

All of this means that the lawn will be brown at this time of year, instead of green. You can see me, here, surveying the brown blue grama lawn. It has some buffalo grass and other native grasses in it, too. The guy I live with says this looks natural, and you know how much I like natural.

Since it’s spring and all, there are a few bulbs blooming. Mostly puschkinias (Puschkinia libanotica, or P. scilloides var. libanotica, or just scilloides, or whatever); he planted a few some years ago, and now has what you might call “more than a few”. 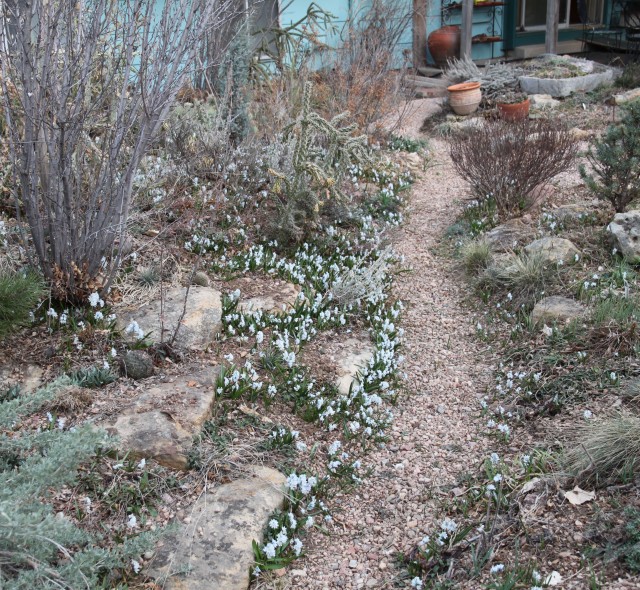 You may notice, in this next picture, a dark hole-looking thing. It is a hole. Dug by a rabbit. The guy I live with says he feels like a creep filling in these rabbit holes, but they’re not allowed to build homes in the garden. The gray straggly thing, Artemisia arbuscula, really isn’t, it just looks that way. And puschkinias. (And no, he says, I don’t capitalize or italicize puschkinia unless I’m referring to the genus Puschkinia.)

If you’re thinking “that’s a lot of puschkinias”, you’re probably right. The guy I live with thinks it’s way too many, but they’re obviously quite happy here. There is another species, Puschkinia peshmenii, and a newly-described one, P. kurdica.

Oh, and the pink form of Chionodoxa luciliae. (The blue is out in the front yard .) 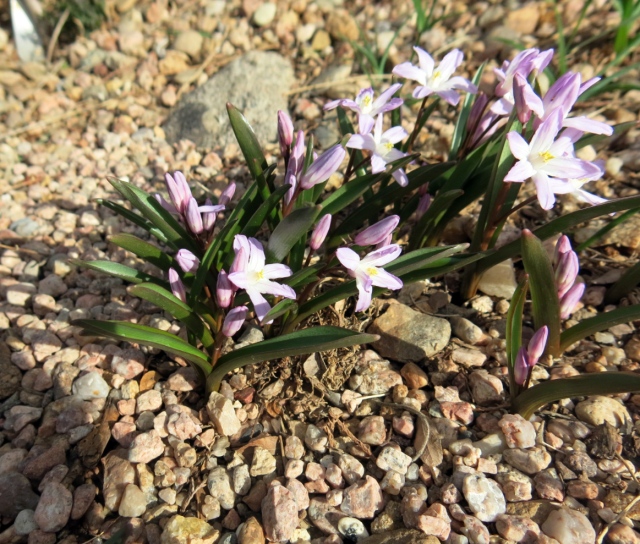 Well, there you are. This is what’s been happening, mostly.

I’ll leave you with a picture of me in yet another characteristic pose. I like my fort a lot. Especially with the Pottery Barn rug inside. (It’s on top of a piece of carpet…a clean piece of carpet….so it’s pretty cozy. And yes, we know the kitchen floor could use some replacing. That’s very high on the list of the guy I live with’s “priorities to be put off until the end of time”.) 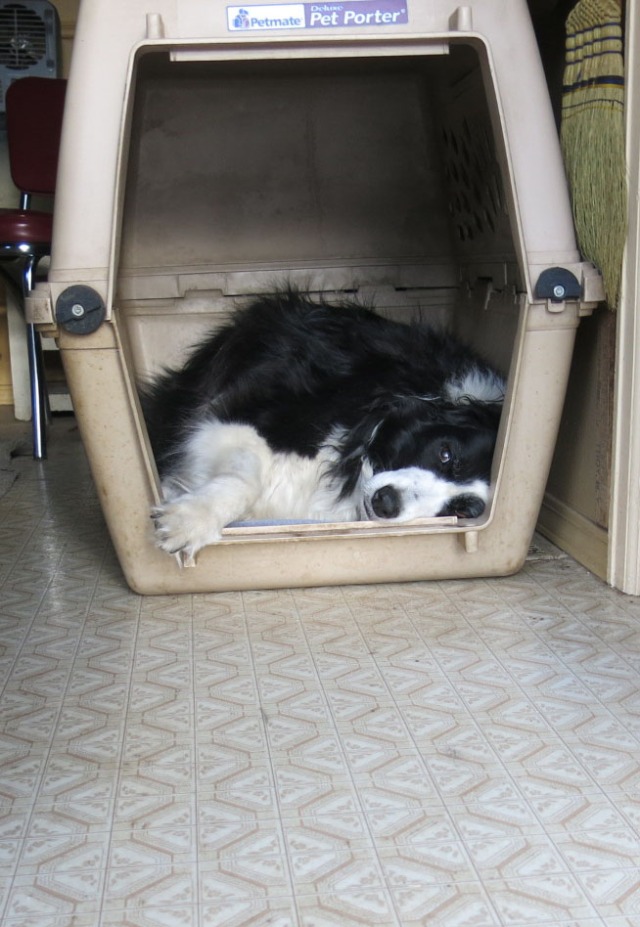 idle
View all posts by paridevita →
This entry was posted in Uncategorized and tagged Chionodoxa luciliae, Puschkinia libanotica. Bookmark the permalink.