the last day of March

Hello everyone; once again it is I, Chess the purebred border collie, here to bring you the latest and most up-to-date news from our garden. You may remember me from such informative and fascinating posts as “The Seed Whisperer” and “The Grape Bush”, among so many, many others.

So it’s the last day of March, and tomorrow is April Fool’s Day. The guy I live with decided today would be a good day to move chollas into the front yard, and that’s something I have no intention of helping with, no matter what. He was really careful, and I didn’t hear any colorful language, so the chollas must have been planted successfully. Instead of falling on him and stabbing him with spines everywhere.

He took some pictures, too. It was fairly cool and windy today (it’s supposed to snow tonight, tomorrow, and the next day), so some of the flowers weren’t completely open, but the guy I live with said you can’t count on the weather, just like you can’t count on almost anything, though my legs gave out on the stairs when I was walking up them, because the goofballs make them slightly weak, and he helped me get back up, and he said I could count on him doing that as much as I needed. 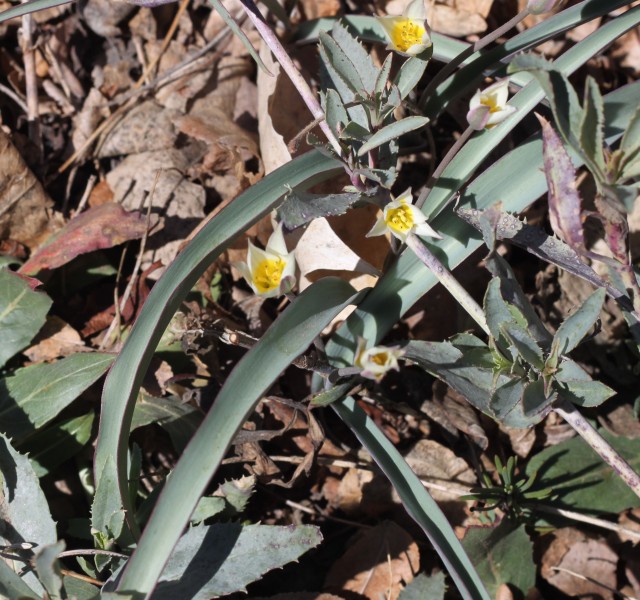 And Korolkowia sewerzowii. (The plants got chilled a couple of nights ago and have decided to “lean weirdly”. They’re going to get covered for the next couple of nights……if he remembers.)

The porophyllum saxifrage, ‘Romeo’. These are several weeks later, but we don’t care.

While the guy I live with was wandering around looking to see if there was anything worth taking a picture of, I checked out the “burlap lawn” in the way back. You can see how bright the sun is here.
Oh, and the chewed bit on the 4×4 there, that was done by my buddy Slipper, who liked to gnaw on wood when he got really excited. Like he was a giant rodent or something.

In the side yard, the shade garden, there are some late forms of Crocus tommasinianus blooming, but they weren’t completely open today. Here’s ‘Barr’s Purple’. Kind of a dumb picture, if you ask me.

But here, he found a seedling, which is almost pink. Pretty strange color for a crocus. He said we might propagate this and make a fortune, or, then again, we might not. 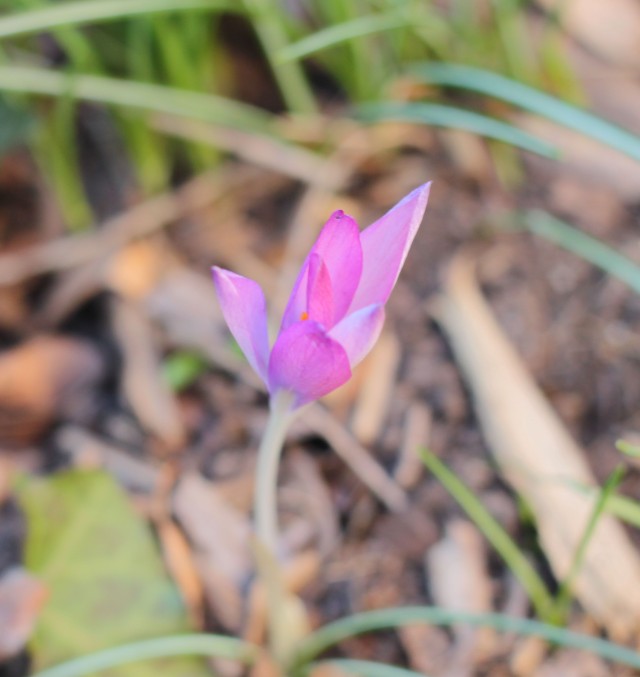 Let’s see. Oh, I know. The guy I live with left me alone yesterday to go to the cactus sale at DBG (the one he told me he wasn’t going to go to because he has over four hundred cactus seedlings and how could anyone possibly need more), and, believe it or not, he only bought a few cactus, though he wanted more. Almost all the cactus he got were ones which have to stay indoors, he says, because we don’t live in southern California or Arizona, and they all came from the Rio Grande Cacti table.

This is one of them, Peniocereus maculatus. He says it was so cool looking he couldn’t resist.

What else? Here’s the foliage of Allium cardiostemon. The guy I live with says there are some bulbs from South Africa that have these coiling, curly leaves, too.

I think that’s it. Tomorrow is April. The guy I live with says April is more interesting than March. I’m going to retire to my fort now, if you don’t mind.

idle
View all posts by paridevita →
This entry was posted in Uncategorized and tagged Crocus tommasinianus Barr's Purple. Bookmark the permalink.

14 Responses to the last day of March