Hello everyone; yes, once again it is I, Chess the purebred border collie, here to bring you the latest and most excitingly up-to-date news from our garden as is caninely possible. You may remember me from such up-to-date posts as “Hedgehogs And Dishpans” and “No Pizza For Me”, among so many, many others.

Here I am in a characteristic pose, shortly after my slightly damp, but excellent, afternoon walk.

Though my feet are obviously wet, it was not I who tracked dirt onto the recently-shampooed, and about to be shampooed again, carpet.

If you think that’s funny, look at the fence the guy I live with “just threw together” to hide the pile of trash on our neighbor’s driveway. 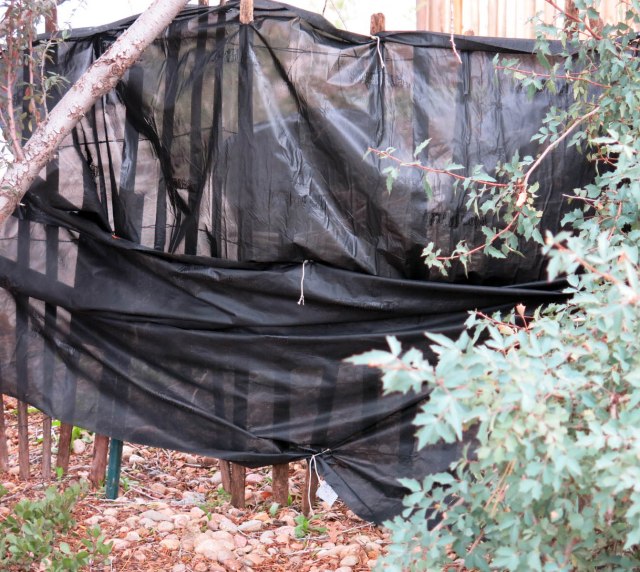 If this isn’t impressive, I don’t know what is. He claims that he’ll replace it next week with a real fence, but today just got tired of looking at trash bags. We’ll see.

So anyway, I have some plant pictures to show you. First off, a shot of the little cactus garden right by the front window. Things are looking pretty good, mostly because he got rid of the dead stuff. You can see how he sort of form-and-textured the garden by artistically strewing some small river rocks here and there. The little flower pot at the end fell over while he was doing that, and he forgot to right it. 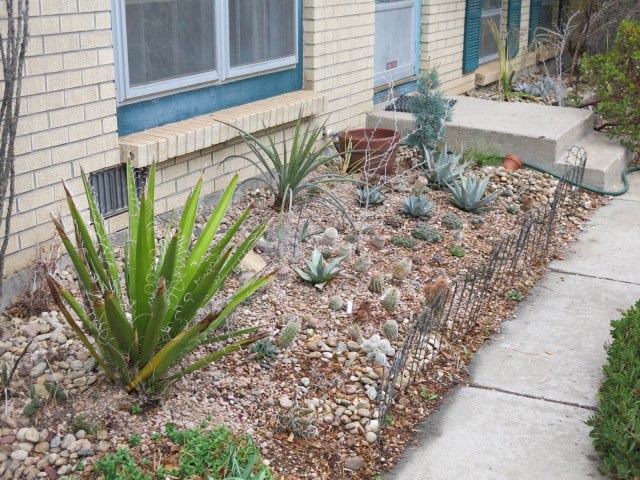 Now some plant pictures. You’re suppose to ooh and aah over these, he says. Whatever.

Maihuenia patagonica. I mean if you want to talk form and texture. (You can see the plant in the picture above, almost where the old-time steel edging fence ends. The old-time fence will probably be a permanent trick-or-treater-protection fence. So little kids don’t fall onto the cactus while eating all that candy, I mean.)

Those little green things are real leaves, and they remain on the plant. The red on the spines is not what you might think it’s from, but it’s a tint that the spines have. He keeps his fingers away from this one.

Oh, well, this is tulip time, here. I should have said.

Tulipa butkovii. There might have been more focus on the flower itself, but, well, there just wasn’t.

And kind of a lot of Tulipa tarda. I think that’s what this is. All self sown, too.

Okay, so now, I need to show you this. I may have said that one of the neighbors is getting rid of a bunch of rock, a lot of which the guy I live with has been moving, and now that he got a new tire for the new-when-Roosevelt-was-president wheelbarrow, he’s been moving a lot more, but today he was offered some real river rock, the fancy round kind, and he always had this vision of a few pieces arranged artistically underneath the pinyon, and possibly another grouping elsewhere in the garden to sort of echo it, and so he brought one home to test it out.

He says it looks like a very large egg.

As you can tell, the predominant color here, that is, of the soil, the flagstone, and the gravel mulches, is a kind of reddish which I can’t really see.

Then there’s this big white egg under the pine tree there. White with gray spots. He says he’s going to return it, with thanks, but it doesn’t fit the color scheme, such as it is.

My mommy would have been in charge of things like this; like, if the guy I live with suddenly had a vision, and described it to her (kind of looking off into the distance, all misty-eyed and stuff), she would either get all excited and start drawing up plans, or tell him he was full of it and it was not going to happen.

I have no opinion. Though if it were a real egg, he could scramble it and I could have that on my breakfast, and I would have an opinion about that, for sure.

I guess that’s it for today. We have a big white egg under our tree, and yes, the guy I live with could put it with the big metal chicken, for, you know, humor and all, but he isn’t going to, because, he says, unlike some gardens, which are festive and “full of hoo-haw”, the guy I live with says our garden is rather somber, if not actually saturnine, and things like big white eggs under pine trees just won’t go here.

I’ll leave you with another picture of me, and my less-than-clean feet. It was a really good walk, as you can tell just by that. I was playing with my squeak toy and got interrupted for a dumb photo opportunity. 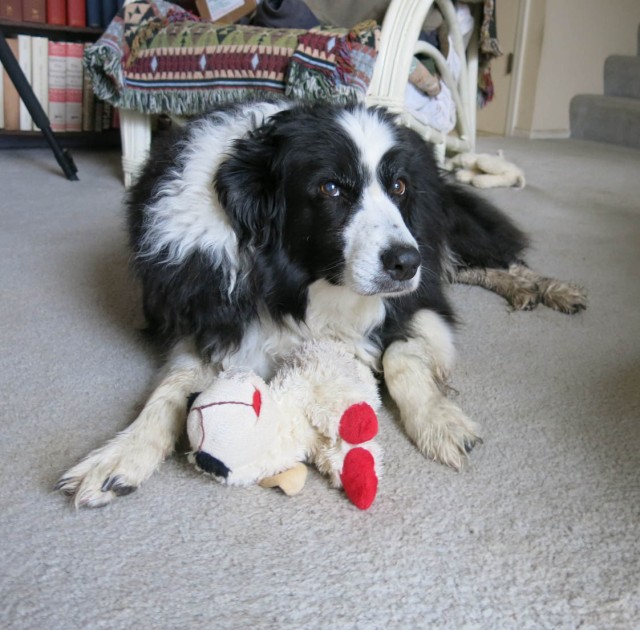 idle
View all posts by paridevita →
This entry was posted in Uncategorized and tagged Maihuenia patagonica, Tulipa butkovii. Bookmark the permalink.