Greetings and salutations everyone; yes, once again it is I, Chess the purebred border collie, here to bring you the latest and most up-to-date news from our garden as is caninely possible. You may remember me from such up-to-date posts as “Before Dawn” and “A Day At The Opera”, among so many, many others. 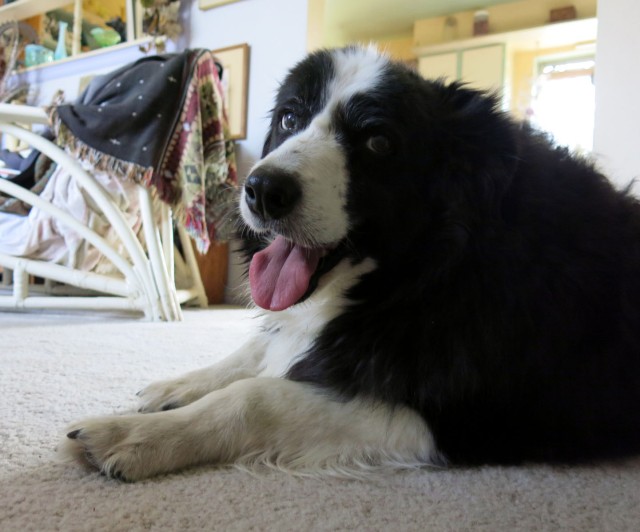 Things are pretty excellent all around, in case you were wondering. The guy I live with has been working in the garden, a lot, and that usually means he’s been doing strange things in the garden.

You may have guessed by now that our garden isn’t much like almost anyone else’s, and, being a purebred border collie, I can understand and accept that, but some of the things that go on around here are fairly puzzling.

He says now he’s achieved “feng shui” with the stones under the pinyon. My mommy used to lecture him about having odd numbers of things, instead of even, and so now he has an odd number of stones under the pinyon, and for some incomprehensible reason this makes him fairly happy. I don’t get it at all. Maybe I’m not supposed to. I bet it’s “mystical” or something. 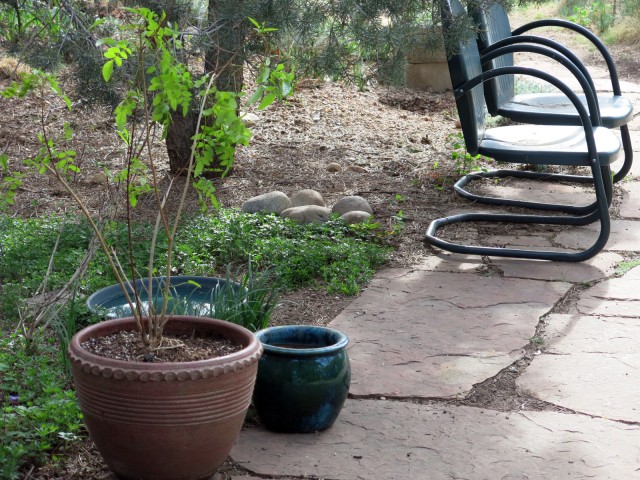 an odd number of stones

The flagstone in the front yard is finished, too, or at least so he says. He did pioneer the piling of rocks, stones, and flagstones on the ground to hide weeds, and so I’ll take his word for it. I know that there’s blue grama seed sowed between the flagstones and everywhere that you see compost. It might look like something, eventually.

You see the blue-flowered thing on the left there, well, that’s Amsonia jonesii.

If you think that’s blue, look at the picture of Penstemon arenicola that he took today. Now this is blue. Not perfectly in focus, maybe, but still blue.

Even more grass seed sowing has been done in the back yard. The “way back” looks like it hurt itself and had to be bandaged. Kind of gross, if you ask me. The guy I live with says this is “the right way” to sow buffalograss seed. You can see the “gross” green grass right at the bottom of the picture there, and that’s what’s being removed. (You can also see that the buffalograss is coming up through the burlap.) Then farther on, under the apple tree, some sort of thing is being done; I’m not sure what.

For some dumb reason, he buried a piece of wood where he decided the buffalograss would stop, and last night, at Tinkle Time, I chased a cat there, and fell over the piece of wood, so the guy I live with took it out because he felt bad. I wasn’t hurt or anything, and I didn’t catch the cat.

And there’s a long strip of burlap in front of what used to be the Long Border, but is now a rock garden. The burlap looks ridiculous, if you ask me.

There was grass on the left of the long bandage, but “someone tinkled on it to death” over the winter. I can’t imagine who that was. The grass isn’t like a huge priority with the guy I live with, but he says he’s going to sow buffalo grass where the tinkled-on spots are. You can also see the “repulsively hideous cool-season grasses” here and there.

I told you this was strange, didn’t I? I’m kind of worried that the guy I live with might do something even weirder, though I know for sure he’s not going to put in a swimming pool or a garden railroad. There’s already a pile of gravel in the middle of the yard that doesn’t seem to have much point to it (except for a few cactus planted in it …), and you can see it right here.

I guess that’s all for today. 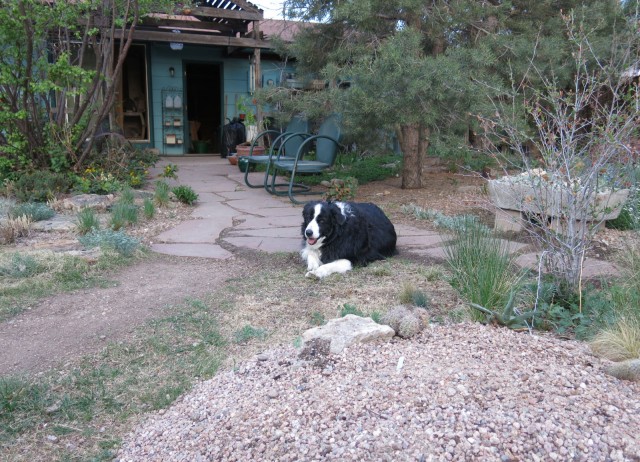 idle
View all posts by paridevita →
This entry was posted in Uncategorized and tagged Amsonia jonesii, border collie. Bookmark the permalink.

19 Responses to my strange little garden