Greetings and salutations, everyone; once again it is I, Chess the purebred border collie, filling in for the guy I live with, and here to bring you the latest and most fascinating news from our garden. You may remember me from such fascinating posts as “Gray And Gloomy” and “Gloomy Weather”, among so many, many other posts in which someone complains about the weather. Here I am in a characteristic pose. I’ve been brushed a lot in the last couple of days.

The guy I live with doesn’t like this cool, overcast weather, and has been complaining constantly. The things I have to put up with. I like this weather, almost as much as I like snow, so I don’t have much sympathy for all the moaning and groaning. Since it was overcast, it behooved (always wanted to use this word, even though we don’t have horses) the guy I live with to take some pictures, and so he did. The prayer flags, which you see here and there, are to remind someone (I don’t know who) that there are new plants which need to be watered. 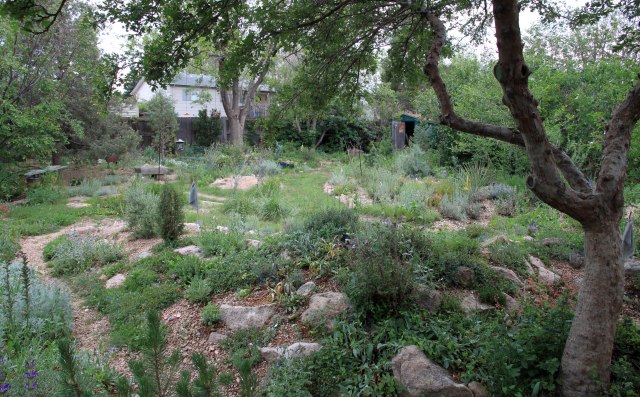 Here’s the cactus garden in the front. You can barely see me behind the window. The hose is there because some new plants were put in, though a few of them were destroyed by hail. 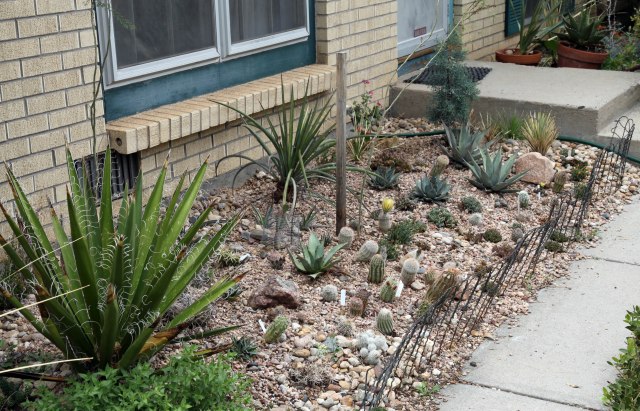 And Echinocereus triglochidiatus, the “White Sands form”. These are some “honking big echinocereus”, according to the guy I live with.

I’ll make the transition from flora to fauna here, by showing Stanleya pinnata and a tiny visitor.

We still have a lot of sphinx moths. One got into the upstairs bedroom and tried to climb into a flower pot. The moth was rescued. 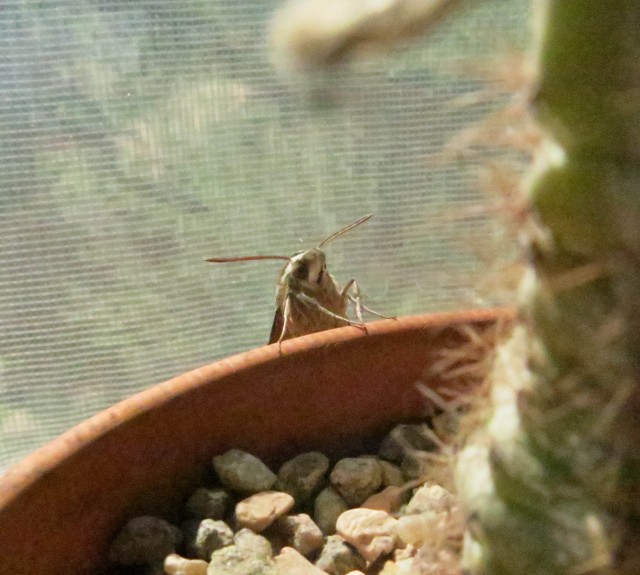 And the other day, it hailed again, and the guy I live with thought that Earl (notch in his ear) had gotten back together with his girlfriend, who’s probably Pearl, but we’re not really sure. He took this picture the next day. You can see another tail behind him, on the left. And sun on the grape vine leaves.

Then there’s the cheeping. It goes on constantly. Cheep, cheep, cheep. The guy I live with got some fairly good pictures, but he also scared the baby robins, which he didn’t want to do. 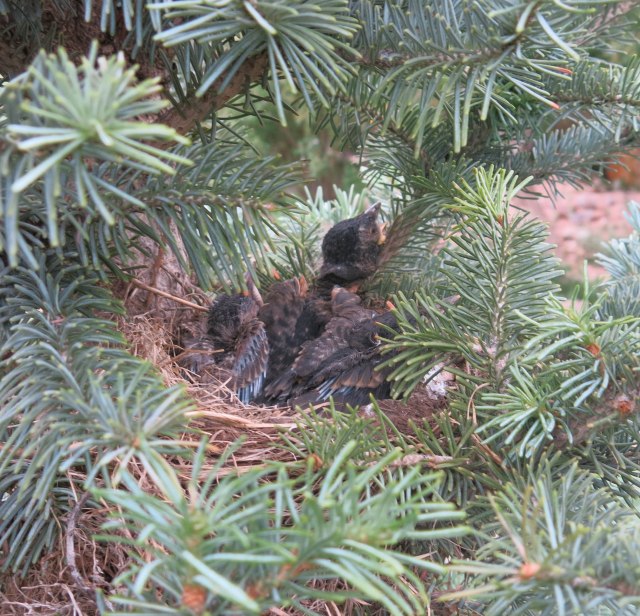 Mom! Mom! Someone’s looking at us!

Now to the Projects part of my post. Every now and then, the guy I live with actually does stuff. Right now, he’s busy rooting cactus cuttings. He uses that as an excuse to avoid uncomfortable social events. “Thanks for the invitation, but I’m awfully busy, rooting cactus.” He made these pins to hold down the joints while they root. Pretty clever, huh? (He said it was clever, so it must be.) Not only do the pins hold the cactus in place, like keep them from blowing away, they also prevent the cactus from falling on the guy I live with’s arm in the event that he picked up the pot and didn’t know the cactus hadn’t rooted. He claims that’s never happened, but it might.

And then just today, he thought he would “fix the trellis”, which has been in a very un-trellis-like state since a few weeks after he built it. My mommy wasn’t very impressed with his construction skills. But he did make an attempt to repair it. He gave up about ten minutes after he started. He says he’ll buy some premade trellises and fix it that way.

It’s been quite a while since I showed pictures of me on my walk, so I figured I’d show a few of them too. Everything is extremely green from all the hail. (It rained some, too, but we like to pretend we’re tough). I’m not in this picture, by the way.

The county came by and mowed, as you can see. Someone there thinks that mowing “keeps down weeds”. The guy I live with says that grasses, by their very nature, successfully compete with weeds, and that everywhere the grass is left unmowed, there are no weeds, but what can you do. In some places, which were mowed last year, grasses have taken hold, but they’re foxtail (Hordeum jubatum), which I have to look out for. The foxtail invades disturbed areas. “People are weird”, the guy I live with says, but there’s not much you can do about it. One time my grandpa Flurry got one of the foxtail’s awns in his leg and he had to go to the Bad Place to have it fixed. I don’t want that.

Water in the canal, by the sluice. The turning-wheel thing, that you use to open the sluice, disappeared a few years ago. There used to be a farm house to the north (to the right), with a little woodland, and my grandpa Flurry and my Uncle Pooka used to go on walks there. The guy I live with says it was kind of scary there at night, with an abandoned house, and tallish trees, two ultra-creepy ponds, and broken-down fences, and then he saw The Blair Witch Project and didn’t want to go in there any more, but my mommy said that was silly. She often told the guy I live with that he was being silly, and now he has no one but me to tell him he’s being dumb. I’m always brave, of course. The area now is nothing but weeds, and east of that, the parking lot which you can see here, behind the fence.

You can see how high the “regular grass”, smooth brome (Bromus inermis), is. It’s not a native grass and spreads like lightning, but it really does control the other weeds. 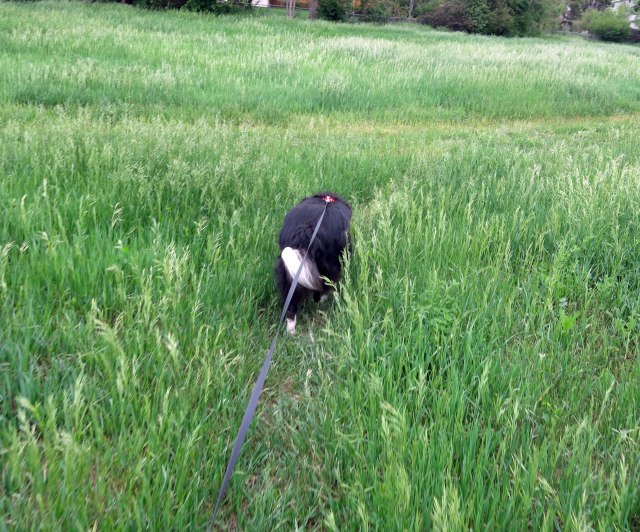 That’s all I have for today. I know it was kind of a lot. Sometimes we actually have things to say. 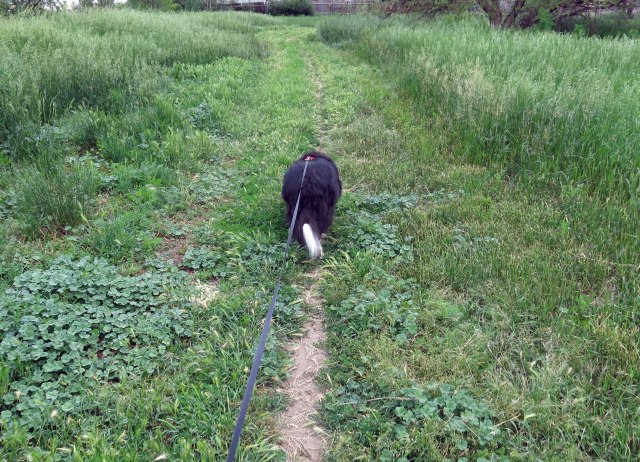 idle
View all posts by paridevita →
This entry was posted in Uncategorized and tagged Echinocereus triglochidiatus White Sands form. Bookmark the permalink.

12 Responses to an overcast day