Hello everyone; once again it is I, Chess the purebred border collie, filling in for the guy I live with, and here to bring you the latest and greatest news from our garden, roasting though I may be. You may remember me from such memorable posts as “Three Percent Humidity” and “‘In The Electric Heat Hypnotised'”, among so many, many others.

Here I am in a characteristic pose. I’m trying to conceal the fact that I’m roasting hot. The guy I live with thinks this is a ridiculous, not characteristic, pose. What with my hind feet where they are, that is. 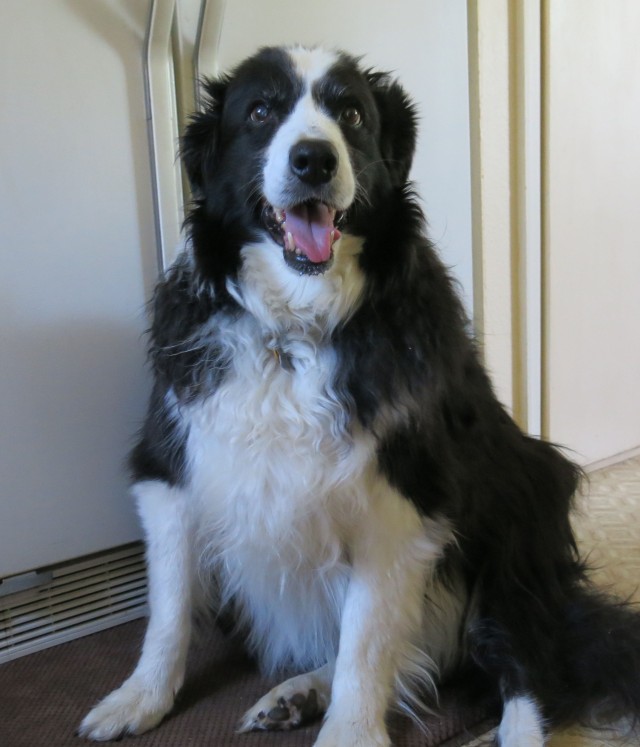 Anyway, whew. It was 90 degrees today (32.2C), which is far too hot for purebred border collies. “Especially overweight ones” said the guy I live with, and I do admit I’ve put on a few pounds in the last several years, but he could have left that unsaid, regardless. And, once again, look who’s talking.

The one thing that really needed to be done was to move the pots full of seedlings into an area where they get more sun, and that actually got done. I just watched, of course. A whole bunch of seedlings already went to DBG where hopefully they’ll like the crevice gardens there, but there are still a lot left. 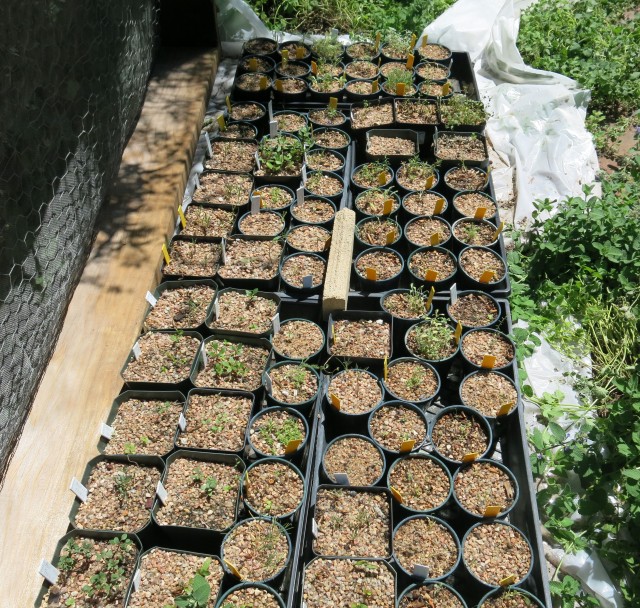 The bitterroots (Lewisia rediviva), of which there were a whole bunch, were planted in the sand pile. They go dormant right about now, so when the leaves begin to wither it’s easier to plant them than to sift through the soil-less mix later in the year. The leaves start to appear much later, after it gets cold.

There are still a whole bunch of seed pots in which nothing has germinated, but those will be held over, in the other frames, until next spring, at least. Some will come up later this summer, too.

Here are a couple of cactus flower pictures. This is Cylindropuntia imbricata, the tree cholla native to Colorado, from Colorado Springs southward.

And here’s a cool flower of an Opuntia polyacantha. The whole plant is going to Timberline Gardens this week because it’s getting way too big for the little area where it’s planted.

And here’s Verbena wrightii. The guy I live with wanted this for years, and now look what’s happened. It’s seeding all over the place, on one of the sand piles. I think it was Goethe who said “Never wish for something; you just might get it.” 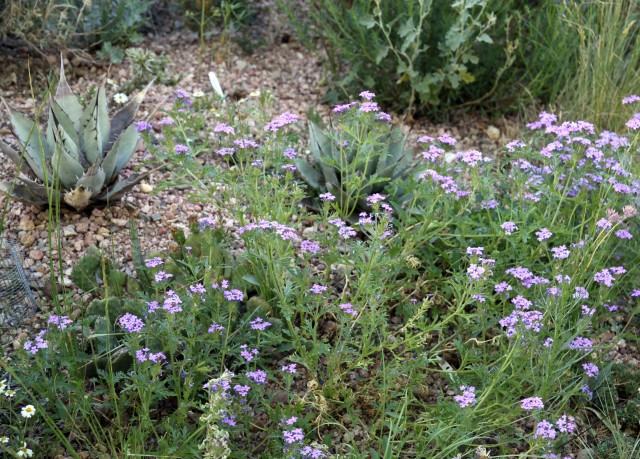 Here’s a picture of the south end of the big sand pile (which used to be the Long Border), taken in brilliant, blazing hot sun. My mommy, who knew about color, said the sun washed out everything. The white on both sides is Tanacetum niveum, self sown. The dark in back is the enclosure fence, with the golden hops growing over it.

In the “way back”. Stachys byzantina ‘Big Ears’ (aka ‘Helene von Stein’), Cotinus coggygria ‘Royal Purple’ (or some name with purple in it; there are several named selections), and Leymus (or Elymus) arenarius, the blue lyme grass, planted where it can take over. A good choice for sandy soil, which this isn’t here (it’s decomposed sandstone, with about ten inches–25cm–of loamier soil on top). The barely-visible small shrub, to the right of the tall weed (a sunflower, which went unnoticed during a few minutes of furious weeding), is Crataegus douglasii. At the extreme right is a mostly-dead plant of Miscanthus sinensis ‘Yaku Jima’, tested for “drought tolerance”; a test it has mostly failed, according to the guy I live with. 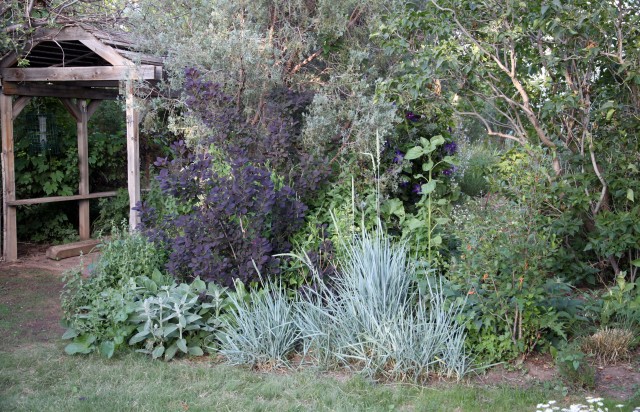 The shady end of this little garden, or border, under Wasatch maples, Acer grandidentatum. (This is to the right of the picture above.) More Tanacetum niveum, and a ground cover of pigsqueak (Bergenia cordifolia) and Geranium macrorrhizum. The fence my mommy built has sort of collapsed and the guy I live with has been working on straightening it, and propping it up. The apple tree, with sunlight on it, has been pushing the fence farther and farther to the east (left). Lawn is ‘Cody’ buffalograss. The bare spot has been seeded and is the subject of much fussing and fretting by you-know-who. 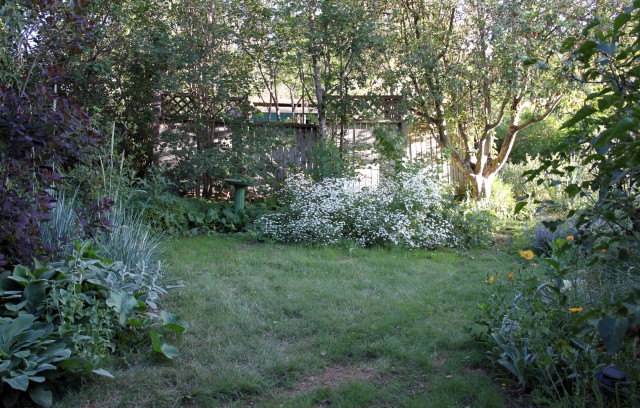 Later, the guy I live with tried to make more bat movies, but there were an awful lot of mosquitoes out by the back fence, some of which landed on my nose. Probably not this one, though. 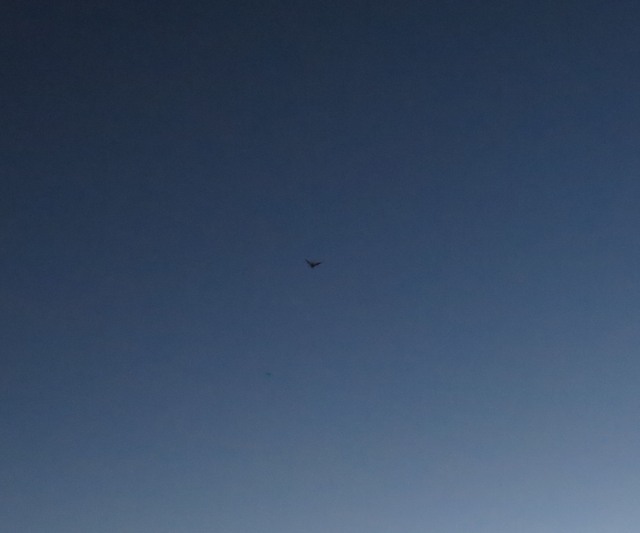 Two nights past the full moon. 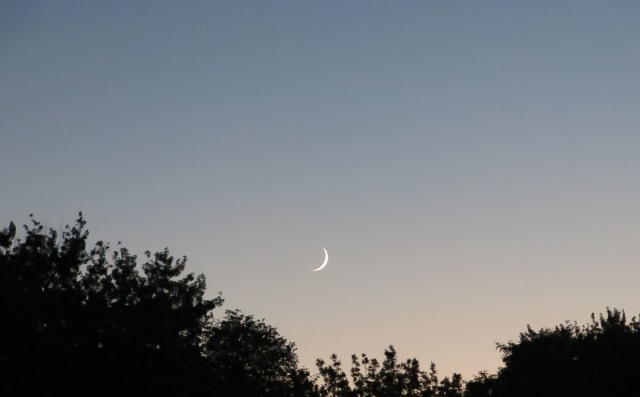 Well, that was our day. Hardly anything happened, except moving the seed pots, but I tried to make it seem like something did. That’s what we do, you know. Pretend like we’re doing stuff. I’ll leave you with a picture of me taken earlier in the day, where I’m being extremely busy. 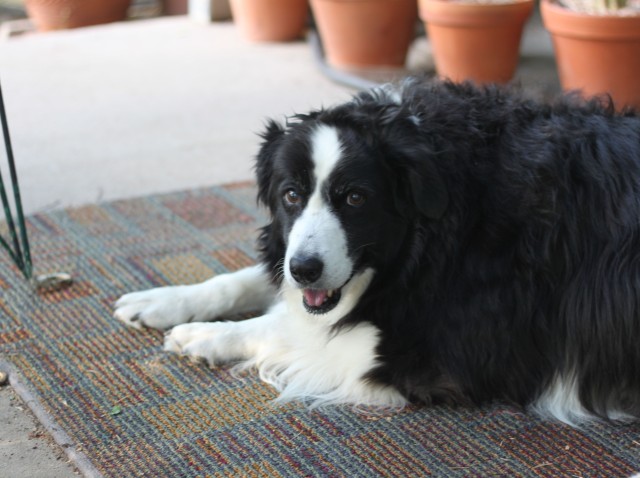 idle
View all posts by paridevita →
This entry was posted in Uncategorized and tagged Verbena wrightii. Bookmark the permalink.