Greetings and salutations, everyone; once again it is I, Chess the purebred border collie, filling in for the guy I live with, and here to bring you the latest news from our garden. You may remember me from such posts as “The Dog Days” and “Life With A Nut”, among so many, many others.

Here I am in a characteristic pose, roastingly hot.

The reason I say “roastingly hot” is because it’s been that way. The guy I live with claims to like it, and to tell the truth, I really do enjoy going on walks when it’s so hot my paws start to cook, but I can’t say why that is. I just like it, that’s all.

You can see how dry and crispy it was yesterday. That’s me there, if you didn’t know. Sporobolus airoides flowering on the left.

You can see that little light spot on my side, which is a sore, and it hasn’t healed, and the guy I live with says I have to go in for surgery next week, to have it fixed. He isn’t telling me much more than that, but I can feel that he’s not totally freaked out, so that’s good. I don’t want to go, but I know I have to. I’ve been to the hospital before, and they were nice to me there.

You can see how crispy the garden is here, too. The little burlap things are to shade new plants. We can have dirt paths here, by the way.

It got all dark and thundery today, and rained for a minute or so, and the guy I live with took more pictures. This is the path to the “way back” on the south side; my mommy’s little garden is on the right.

Her little garden. You can see how badly the fence needs fixing. This little garden gets watered once a week or so.

And the buffalo grass lawn in the “way back”, again, with Tanacetum niveum. The lawn is looking better every day, or so I’m told. I know we just showed a picture of this, but now we’re showing another one. That’s how we are around here.

Speaking of lawns, the guy I live with decided it was high time to mow the one in front, so he did. This is it, mowed. Yes, that’s our front lawn. Blue grama. Like in case people came by and demanded there be a lawn in the front yard, we could point to this and say “Look, a lawn”. 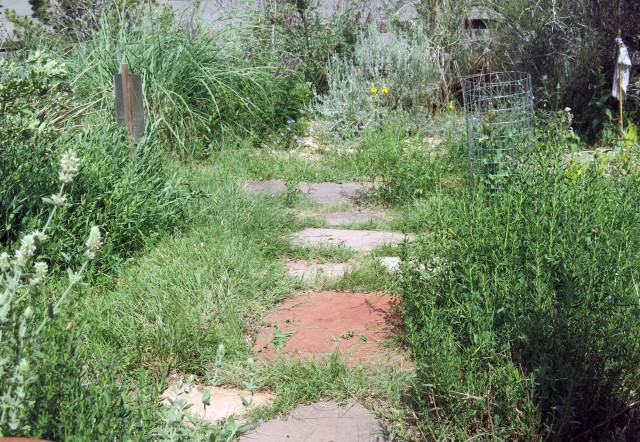 The desert willow, Chilopsis linearis, from the Chisos Mountains, has just started to bloom.

Here’s “something you don’t see every day”, though of course we do. Ignore the dead stalk of Fritillaria persica, won’t you? A pink flowered Salvia dumetorum, I guess, and the naturally-occurring intergrade between Yucca rupicola and Y. pallida. (You can see the twisted leaves.)

Later on, it got all dark and thundery, and rained for a few minutes. It’ll be nice and cool for sleeping.

The guy I live with “took advantage” of the darkness and took a bunch more pictures, almost none of which came out the way he wanted. The front garden, again. He put a new “trick-or-treater fence” in, but this will be replaced with a slightly longer one, made of the same material, heavy-gauge steel. This is one of those old-timey garden fences, of the kind he thinks he can’t get any more. The new one won’t lean so much, or so he says.

The oaks in the front yard. Some of them, anyway.

A corner of the front yard no one ever goes in. Basically on the other side of where the picture above was taken, back in the right. Well, okay, someone had to go here to take this picture, but I never go here. That’s Penstemon eatonii, blooming red. 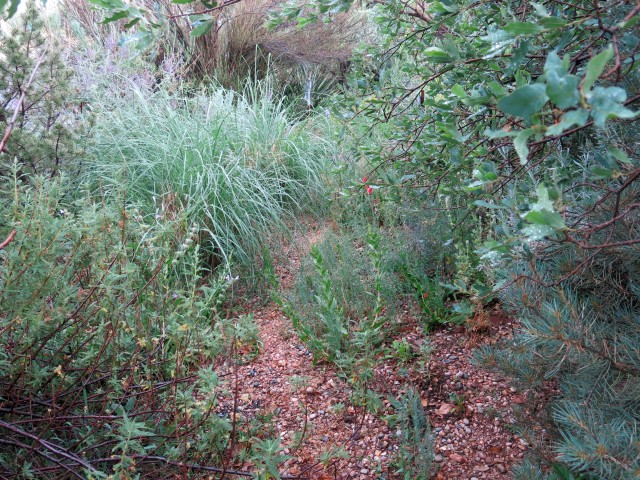 Oh, I almost forgot. The plants. The guy I live with is all excited about getting these plants. They’re “buffalo gourds”, Cucurbita foetidissima. He says you see them by roadsides all throughout the Southwest. These’re going in the “way back”. 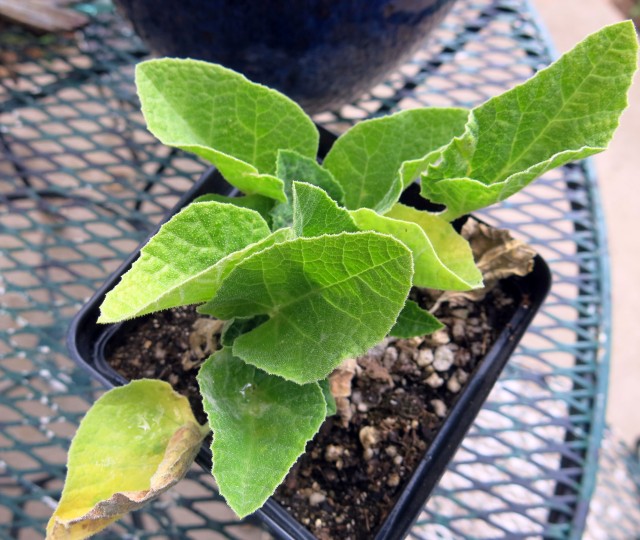 I guess that’s it. The guy I live with has native cucurbits to plant (but not to eat, for sure), and I have a fort to lie in.

idle
View all posts by paridevita →
This entry was posted in Uncategorized and tagged Chilopsis linearis, Cucurbita foetidissima. Bookmark the permalink.

14 Responses to hot, dry, and crispy