my day, in pictures

Hello everyone; yes, once again it is I, Chess the purebred border collie, here to tell you all about my day today. You may remember me from such posts as “Dogs” (the post where I introduced myself) and “Pictures Of Me”, which featured pictures of me, among so many, many other posts featuring me.

Here I am in a characteristic pose. This post will be mostly about me, so you already know it’ll be excellent. 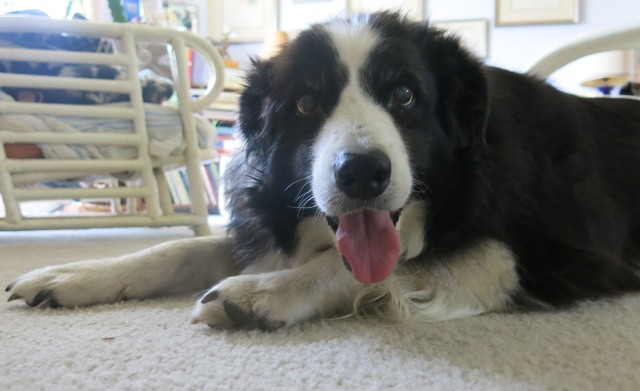 My day started out pretty much like usual. The guy I live with started poking me with his finger at about 9:30 or so, and finally rolled me out of my cozy bed at about 9:45. I got my breakfast, and went on my walk. The guy I live with pointed out the huge clouds piling up over the mountains, but my walk was still sunny, and everything was okay. This has been a really rough summer for me, though.

This is what the sky looked like at noon. Looking northeast. 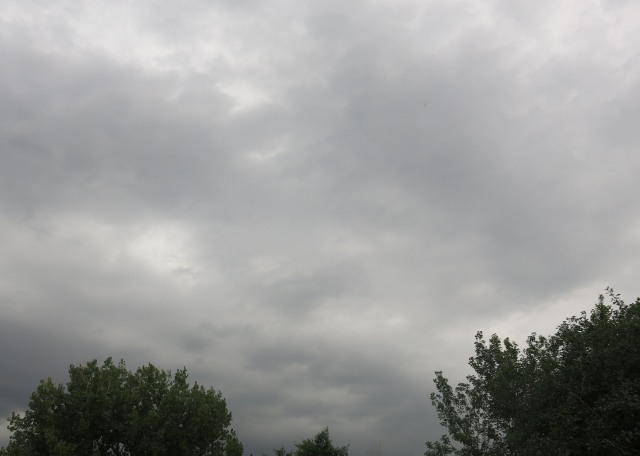 It started to thunder, and thundered like crazy for about an hour, and it even rained a bit. The guy I live with took a picture of, well, the thing he always takes a picture of, in the rain and wind. Ipomopsis rubra, again. (The pot down at the bottom of the picture is indeed slanted…it isn’t your eyes….and is empty, too.) The camera didn’t get wet like I thought it might. 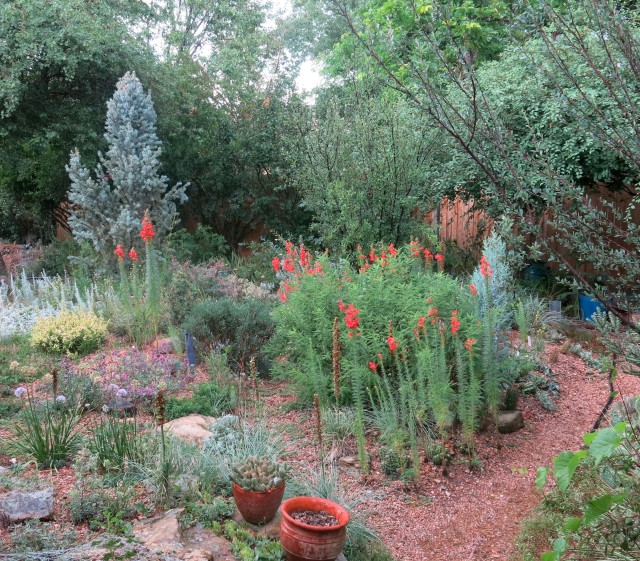 While it was raining and thundering, the guy I live with did a bunch of vacuuming (I don’t like that, either), because he said I’d left biscuit pieces all over the new mats and rug. He didn’t get around to vacuuming this side of the rug. You can see that the light is on, on the kitchen table. (The aquarium sitting on cinder blocks used to have a turtle in it. The turtle lived a very long time but went to a new home after my mommy died. It was big, and pretty scary.) 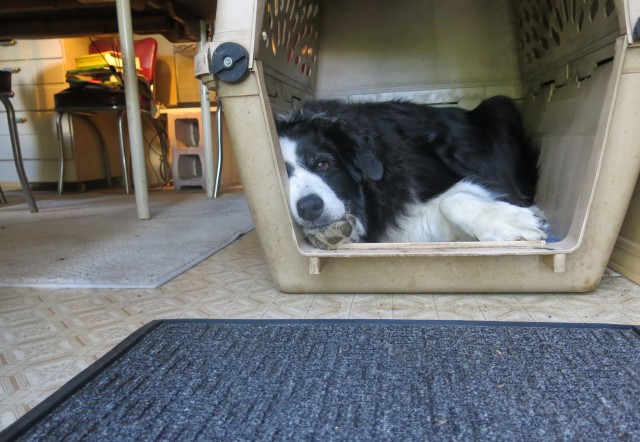 The guy I live with got hopping mad when he discovered a mouse had gotten in the house last night, and pooped all over my toys. He washed and dried my toys, and then put them back in my toy basket, next to the bookshelves with my mommy’s books. That’s my Nippo, the hippo, on top, there. 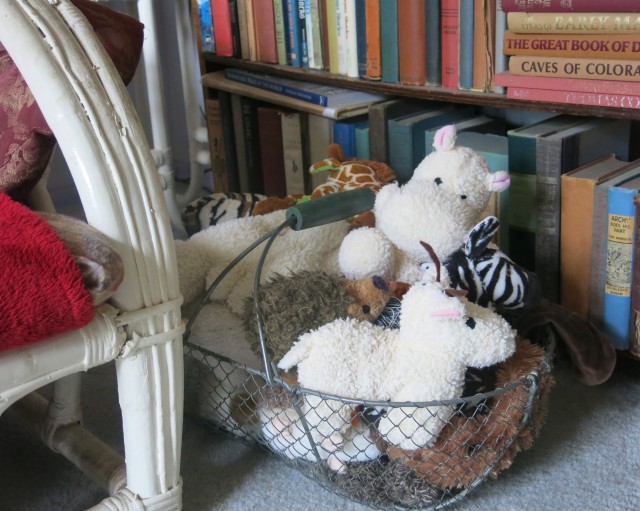 Then, the guy I live with took some pictures of plants, since there are a few in the garden here. This is the Rocky Mountain bee plant, Cleome serrulata. It’s as tall as he is.

Over to the right of this, growing in over two feet of pure sand and gravel, is Agastache ‘Desert Sunrise’. It doesn’t need any watering to do this, if it’s growing in deep, permeable soil. (If it rains, I mean. By the way, the clematis in back is growing in regular garden soil, and is much lower down; there’s a slope right behind the agastache.)

The first of the cyclamen started blooming about a week ago. This is Cyclamen fatrense, grown from seed. More cyclamen are coming in the mail, soon, and guess who’s all excited?

Way out in back, Sphaeralcea incana, blooming all orange. We have to have a chain-link fence back here, because this is a flood plain. The top of the fence was added later, and was bent by “overweight raccoons” climbing over the fence to get stuff. I bark at them if I see them.

About two o’clock in the afternoon the sky looked like this. 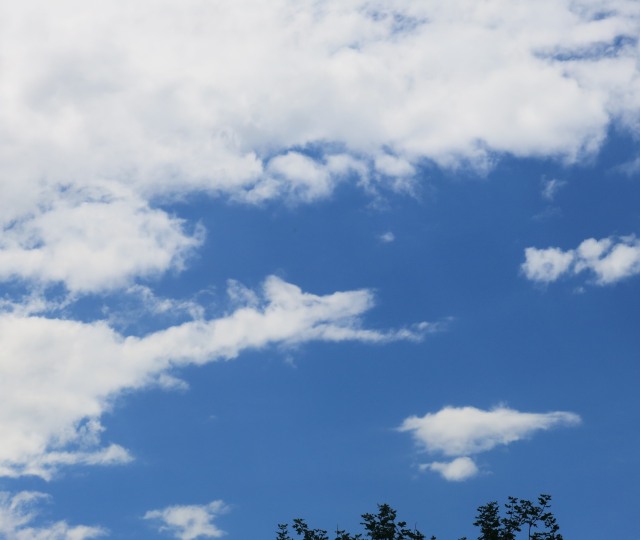 The guy I live with took some pictures of the baby cactus sitting on the shelves, to show how much they liked all that rain a week ago. Happy, happy cactus.

And, then, of course, the guy I live with completely freaked out when he saw my hind leg. He was sure I’d injured myself.

It was grape jelly, from the oriole feeders. He felt pretty stupid after he realized that.

Speaking of stupid, I’m sure you’ve noticed the “Wardian case” on the patio table. My mommy arranged stuff inside it, though it’s been knocked over a couple of times and needs rearranging “at some future date to be determined later”.

Well, a squirrel saw the snail shell in there, grabbed it, and carried it up to the top of the patio cover, because it thought the shell was a nut. What a maroon, huh? The guy I live with yelled at the squirrel, who eventually realized that it wasn’t a nut, and so the guy I live with got a ladder and retrieved the shell, and returned it to its rightful place. We had snails here one summer a while ago, and then another summer a couple of years back.

Then at 6:30 p.m. Purebred border collies look at the sky a lot, if you didn’t know. It’s important to know whether or not you can be out in the garden, puttering around, or hiding in your fort. 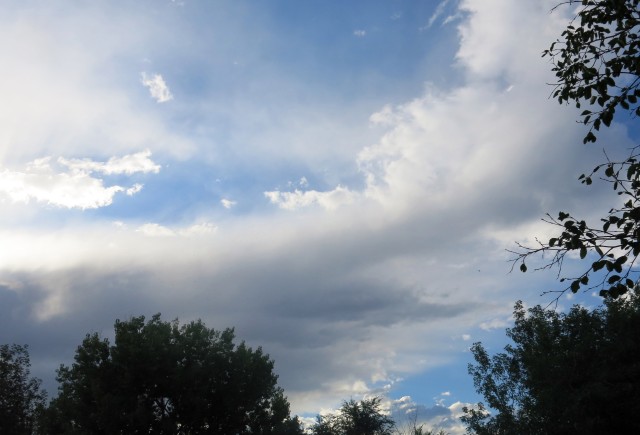 At around 7:15, I thought I heard some rumbling, but pretended it was okay. “Sometimes it helps to look in a different direction”, the guy I live with said, and sure enough, a thunderstorm was heading right for me. 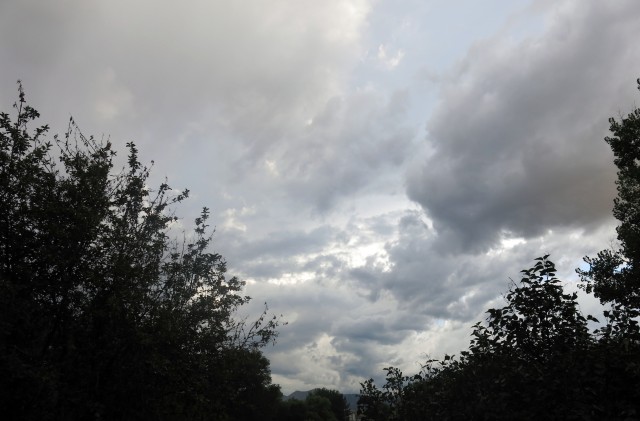 It rained for a minute or two. There were some creatures who weren’t at all fazed by the weather, but knowing this didn’t help me one little bit.

There was kind of a sunset, anyway.

Well, that was my day, or at least most of it. I guess tomorrow will be the same, because it’s mostly been the same for almost longer than I can remember. The guy I live with says that everything changes, but the weather doesn’t seem to, much, so I can just hope that he’s right. For once, huh. 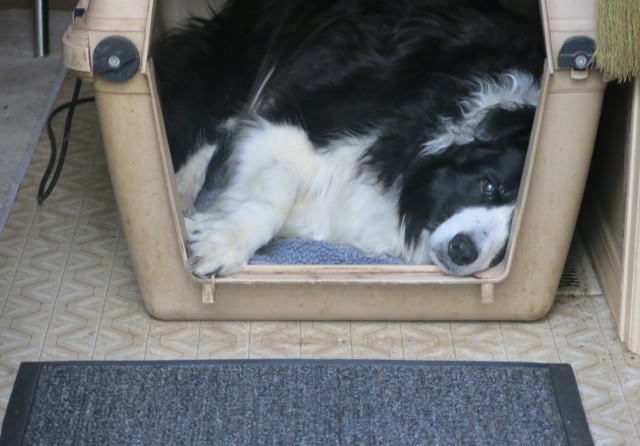 6 Responses to my day, in pictures