Posted on September 5, 2014 by paridevita

Greetings and salutations everyone; yes, once again it is I, Chess the purebred border collie, filling in for the guy I live with, and here to bring you the latest and most spine-tinglingly  exciting news from our garden. You may remember me from such spine-tingling posts as “Out Came The Sun” and “Invasion Of The Pods”, among so many, many others. 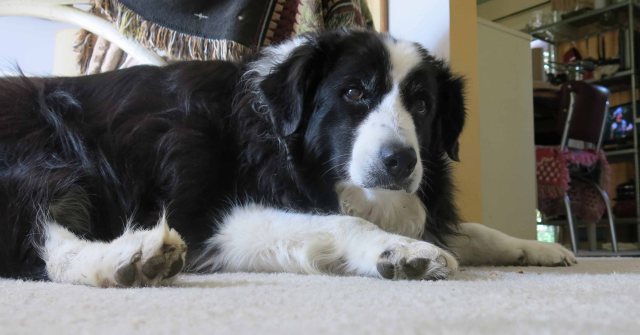 The reason why I haven’t posted for a while is that, for one thing, we had three beautiful sunny days in a row, and we had to enjoy them to the fullest before it started to get all thundery and stuff again, and also because I finally began the transition to the new anti-seizure medication which should help me lose a lot of weight. The guy I live with was all freaked out about this, thinking he wouldn’t be able to get the dosage right, or forget something, and I would die, and then what would he do, but we finally started, and now I take fourteen pills every day. (Until we’re done with the transition.) The guy I live with only takes six, so I’m sure he’s jealous.

Oh, and by the way, the ten sunny days, give or take a few, we’ve had since the middle of May don’t necessarily mean the end of the world as we know it. Summers here are sometimes like that. Denver does not have, as is often claimed “300 sunny days a year”; it only has around 100 or 120. Days where it’s sunny all day, I mean. What they did to come up with the 300 business is to count an hour of sun as a sunny day, which I think is cheating, because it was often sunny in the morning here (I could feel the sun on my stomach, lying in bed), and then started to thunder about eleven in the morning, so that didn’t count as a sunny day to me.

It was all overcast and gloomy yesterday, and thundered a little, and then last night it rained. About half an inch (1.25cm), so everything is all damp and rain-smelling. My morning walk was cool and pleasant.

The guy I live with says it’s beginning to feel like autumn, and I guess I have to agree. Looked what popped up in the garden, pretty much overnight.

Colchicums are up. This is ‘Dick Trotter’. You can see what Graham Stuart Thomas called “rain splash” on the little one. 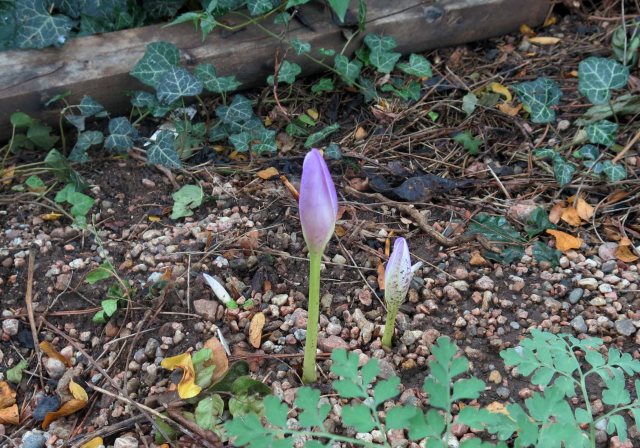 Cyclamen, of course, are big news around here. I don’t notice them much, but the guy I live with gets all excited, and likes to crawl around on his hands and knees ooohing and aaahing. The first of the Cyclamen coum foliage has unfurled. 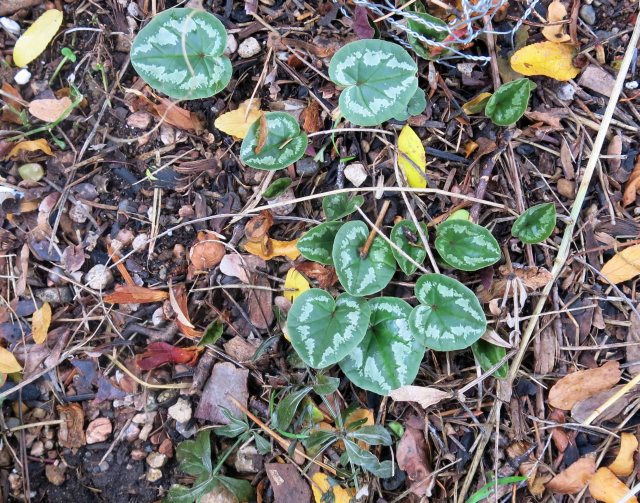 And the first serious flush of Cyclamen hederifolium. 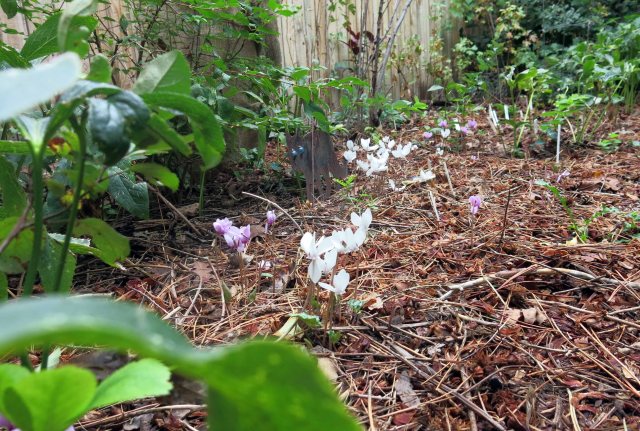 It was also time to re-pot the Rhipsalis pilocarpa (aka Erythrorhipsalis pilocarpa) which hangs upstairs in my bedroom. This cactus came from Logan Street Greenhouse, where the guy I live with and my mommy used to go, when they went to various places in the Washington Park section of Denver (like to Oodles, the Asian-fusion restaurant they both loved, or to Book Buffs, a “totally cool” book store which had the most amazing selection of books), and there was one time when they went there in the rain, and the rain was pattering down on the old greenhouse roof, and the guy I live with was really taken with the cactus, so he brought it home. The greenhouse caved in after the blizzard of March 2003, and so the cactus is a memory of the greenhouse, as well as their visits, and to the other places which are also gone now.

There was a lot of noise in the garden a couple of hours ago, and the guy I live with realized there was a hummingbird fight, so he stood out there trying to be invisible (he says it works better when other people are around), and took this totally unfocused (just pointed-at) picture.

Besides all this, there really is some big news today. I mean like “hugely gigantic”, according to the guy I live with. (My mommy would just roll her eyes at times like this.)

This is the source of all the excitement.

This is a seedling of Iris urumiensis.

They say that growing oncocyclus iris (which this is) from seed is a very time-consuming project. Like me, the guy I live with has no sense of the passage of time, but really didn’t feel like waiting twenty years for the seed to germinate, so he used the forced germination technique, to speed things up, some.

Aril irises are so called because of the aril, or collar, on the seed. Here’s a picture of a really old (maybe ten-year-old seed). The picture could have been more in focus, but you can still see the aril. 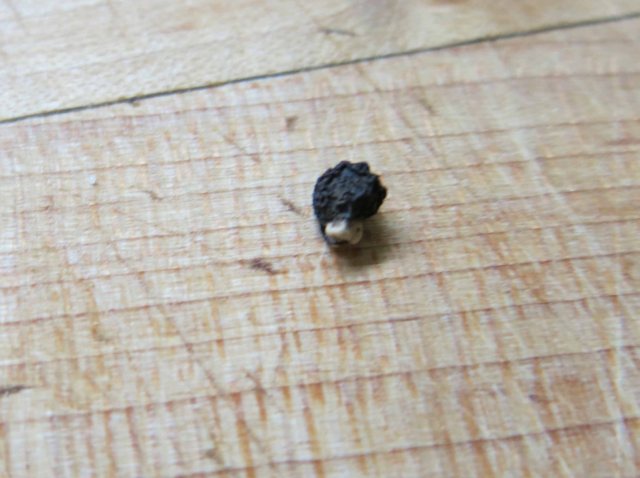 What he did was to get salt shakers and beakers, and soak the seeds in a solution of half bleach and half distilled water for about half an hour (to sterilize the seed coat) then wash that out thoroughly like he learned to do in chemistry class (in high school, he got a D+ in chemistry because he thought it was boring, and the teacher didn’t appreciate that, for a take-home test, he wrote out Avogadro’s Law in Italian), then the seeds were put into the salt shakers with distilled water, water changed every day for five days, and then the aril was removed with a dental pick (the seeds were all plumped up and soft), and then the seeds were stratified in the refrigerator with perlite. This was around Christmas, and the seeds are germinating now.
“So, see, all the time I saved?” I thought about pointing out to him that nine months in human time is like 63 months in purebred border collie time, but I decided to just let him bask in the glory of his achievement. I have other important things to attend to.

idle
View all posts by paridevita →
This entry was posted in Uncategorized and tagged cyclamen hederifolium. Bookmark the permalink.

14 Responses to signs of autumn