Greetings and salutations, everyone; yes, once again it is I, Chess the purebred border collie, here to bring you the latest news from our garden, and (definitely more interestingly) the latest news about me. You may remember me from such posts as “Dogs”, in which I think I introduced myself, among so many, many others.

Here I am in a characteristically sweet pose.

If I look like I could be cuddled, it’s because I can be. My mommy cuddled me all the time, and as many of you know, I’ve been really sick, and technically still am, but I’ve been stuffed full of medicine now, and even ate some roast beef and, of course, some Brie. True, it wasn’t the most expensive Brie that the guy I live with could buy, but it was still really good.

I did hurt one of my toenails, so my walks aren’t going to be all that long until that mends, but I feel so much better that I thought a short post might be in order.

Oh, this is funny, though it didn’t really involve me. The kid across the street, who “might be in second grade” sometimes comes over to hang out after the bus drops him off, until his parents come home from work, and the other day the guy I live with was kind of at a loss as to what to do, seeing as how he was in the second grade in 1958, when all kids had to play with were sticks and rocks, but then he suddenly had the brilliant idea of letting the neighbor kid use the Pik-Stik (the “grabber deal” that he uses to pick up stuff when he can’t bend over or he’ll get dizzy), which the neighbor kid thought was “totally cool”, and the two of them walked around picking up trash; the guy I live with held the trash bag. Even the beer and wine bottles someone threw into the field, near where I walk, got picked up. The guy I live with said he was “a genius” for thinking of this. I had to listen to the “genius” business for the rest of the day ….

Today, the guy I live with got these things in the mail. They remind me of the thing that grabbed John Hurt’s face in the movie Alien, which was a really scary movie, but the guy I live with said they were eremurus, and not to worry. It’s true that these are only ordinary eremurus (E. stenophyllus), but we didn’t have any in the garden any more, because of what the guy I live with calls “trowelitis”…..

You plant the growing part just below the surface of the soil, and then spread out the roots very carefully (they don’t really need to be soaked), making sure that none get broken (or dusted with sulfur if they do). 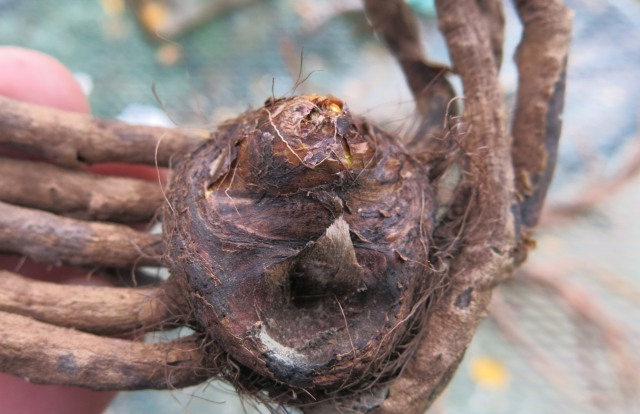 The guy I live with says you then ignore all the stuff people write about “drainage” and things like that, because eremurus grow in a climate similar to ours, though it is important not to plant them in a place where there’s standing water in winter. We only have one place like that, where water from melting snow flows down both the paths, north and south, and into the “way back”, which of course is where there were some eremurus planted last year, and they rotted away to nothing, since the soil was frozen, but the top part was ice water, for weeks on end.

And, oh, he says if you think eremurus are cool, which they are, then there a Russian website with pictures of lots of species (can be translated), and when the guy I live with looks at that, he wonders how he could get a bunch of seed of all of these, besides going there himself.

I was also going to show bunches of crocuses blooming here today, because autumn crocuses are one of the guy I live with’s absolute favorite things (besides me, of course), but I’m only showing two pictures. 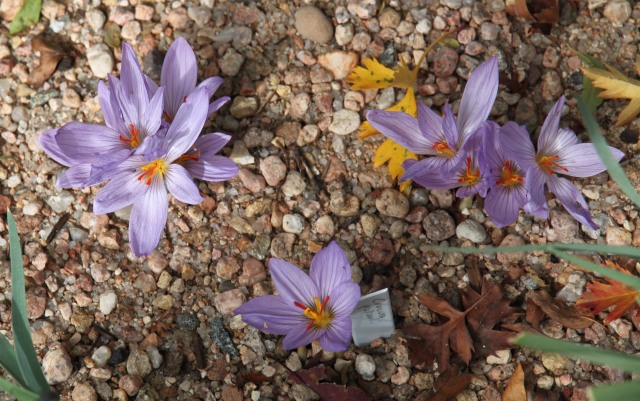 If you want to see more of our crocus pictures, there are more in our photobucket. There are still more to come, and so watch that space for the next couple of months.

Thanks for all the comments wishing me well, by the way. I have things to do now.

16 Responses to on the mend