Greetings and salutations, everyone; yes, once again it is I, Mani the increasingly huge purebred border collie, filling in for the guy I live with, and here to bring you the latest news about this and that. You may remember me from such posts as “A Misty Day”, among an ever-growing (like me) number of others.

I bet you’re thinking how intelligent and sophisticated I look there. Well, I pretty much do, although the guy I live with took my picture when I was thinking of something totally different from sophistication and intelligence; instead, I was being the fierce patroller and eliminator of things that do not belong in my house.

Here I am in a fiercely patrolling pose. If you needed to know how to look super alert, well, this is how it’s done. 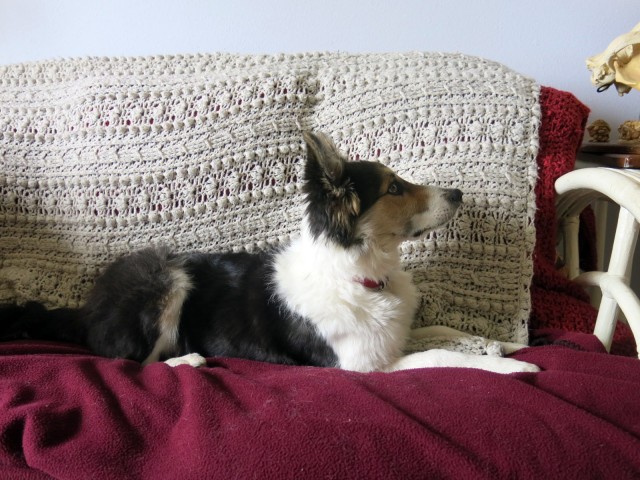 There are things that need watching very closely.

So just in case you thought I was something like a Home Ornament who sat around and did nothing, you would be wrong.

I did get chastised for swiping Ambrose again, but I guess the guy I live with isn’t too steamed about it now.

I did get really yelled at for “trying to chew a hole in the carpet”, but I wasn’t really doing that, I was simply looking for something. I forget what, now.

And also, if you were under the impression that the guy I live with was like this perfect, enlightened, mellow guy, you might be surprised that he gets angry at people from time to time. He also does stupid stuff.

He watered his cactus seedlings, you know, the thousand or so, and forgot that the pots were sitting in trays and that the water wouldn’t drain anywhere, and instead sucked all the water right back up into the pots, and he also thought the air would dry them out, but instead half of them died. This is all that’s left (except for one flat still upstairs and some that are being planted out). 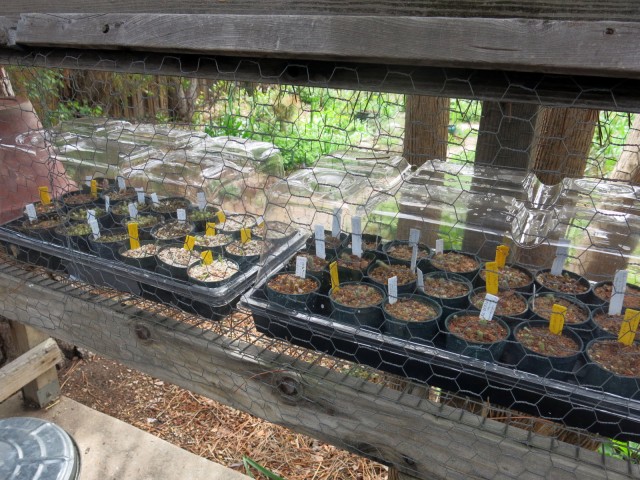 He said he didn’t need that many cactus and that he was kind of losing interest in them, and that the whole thing was really stupid on his part. There’s an anniversary coming up on Sunday and I guess he’s moping more about that than all the dead cactus, but the point here, really, is that I bet you didn’t know how dumb he could be.

And yet, he claims I’m dumber, which is hard to believe, and not very nice, because he says I’ve been trying to climb up the shelves on the patio to get to the squirrel. “Shelves?” you might wonder. Yes, shelves.

The squirrel, or I guess squirrels, used to have a cozy nest in the corner of the patio, here. Way up in the corner there’s a shelf built there, just for nesting, but the squirrels moved in when they discovered they could. Looks pretty cozy to me. 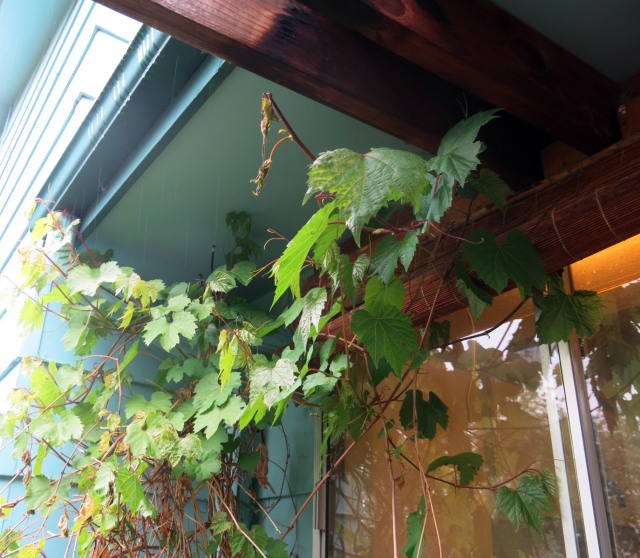 For some reason (“probably lower rent”, according to the guy I live with), they moved everything to the shelves where stuff is kept. The shelves have covers on them to prevent rain from washing out any seed pots that might be there, and now there’s a squirrel fort there, which I can’t get to. Not that I could get to the one you see above, but this one is lower down, and I know it’s there, so it’s much more aggravating.

(All those really loud drops are because the guy I live with had a trash can lid on his head….yes, that’s right….and held the camera with one hand.)

It might be to me, too. I like to play out in the rain, but not really when it’s pouring rain. I suppose it will stop eventually, the way things do.

14 Responses to stuff you didn’t know