you know, because raccoon

Greetings and salutations, everyone; yes, once again it is I, Mani the reasonably large, yet still fairly small, purebred border collie, filling in for the guy I live with, and once again here to bring you up to date on the very latest news from our garden. You may remember me from such posts as “Passing The Time”, among so many, many others.

Here I am in a characteristically horticultural pose. It was probably the only time I stood still in the last few days, except when I was asleep.

We do a lot of napping, and one of my favorite times of the day is when the guy I live with takes a nap. He sleeps on the living room floor “because sciatica”, he says, and I sleep right next to him. The carpet is pretty clean, if you were wondering.

But all day yesterday was really great. I got to spend the whole day barking. I barked so much the guy I live with said “Hey, stop barking”, because, you know, a raccoon was on the shed roof, and it stayed there all day. We couldn’t get a picture of it because it was hiding in the grape-vine on the shed roof. It only dawned on the guy I live with after several hours of me barking that there might be grapes on the grape-vine, what with the raccoon being there.

It was pretty fun to bark at. I even tried to climb up the shed wall, but the guy I live with said not to do that. He’s always saying things. Get off this, don’t do that, don’t eat this, stay away from that. I always pay very careful attention, of course.

Well, what’s been happening here is that some construction has taken place, almost a year after starting it, “because no motivation” prior to up to now. So there was sawing and drilling and hammering and things like that, including some “colorful language” when some things were “sawed wrong”. The guy I live with blamed the saw.

There was also a surprising amount of measuring and using the level and looking at things before they were hammered or screwed into place.

This is the new “enclosure” fence. The reason it doesn’t go all the way is because, well, “it just doesn’t”, and I guess I understand that. I have to be able to get into the enclosure to chase squirrels, and the back way, going around the end of the fence, is better than the usual, typical, normal way.

I guess up until last week the fence was going to have lathe on it, a trellis sort of thing, but the guy I live with said that would make the garden too shady, and it’s shady enough as it is. 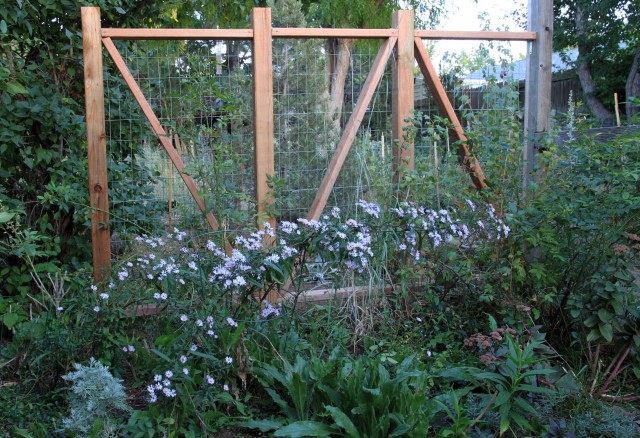 That’s Aster ‘Vasterival’ (maybe) all leaning and everything, but you may recall that it rained for two straight months, and then hasn’t rained for two straight months, so this is what we get. Leany floppy stuff. The plants get all super hydrated and grow more and then the dry soil at the roots makes them flop. More asters from Far Reaches Farm were planted in this garden a few weeks ago.

The lady of the house, whom I never knew, but whose, I don’t know, you might say, personality is all over the place here, loved asters, and so the guy I live with said the enclosure should be full of asters. I guess I agree.

Here’s the “way back”, with ‘Vasterival’ (for sure), and the blue one behind it, which is called….um…..something. If you look in the lower left hand corner you can see how dry the grass path has gotten. Dry.  The posts are for owls to perch on, and scare the poop out of me when I come upon them, or so the guy I live with says. 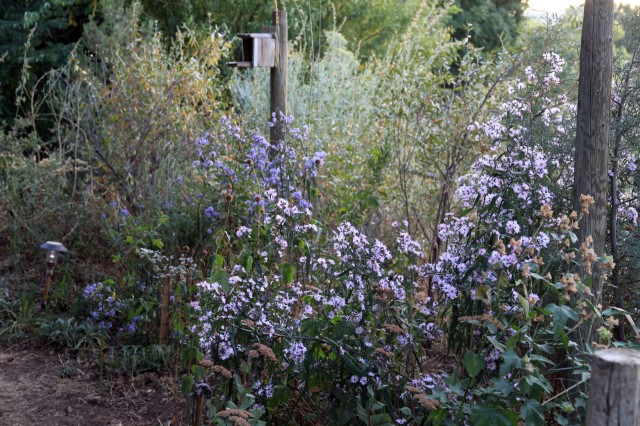 ‘Vasterival’ again. Maybe the camera doesn’t show how pink it is. The guy I live with said it was the sun’s fault.

He also says that these asters tolerate dry soil better than the New England or New York ones, and believe me, the soil here is very dry indeed. This area doesn’t get watered. The guy I live with did water the aster at the base once or twice because he wanted flowers and not much leaf-drooping.

I guess the next project is going to be in the Employees Only section of the garden. I get to go in there because my job is keeping rabbits and squirrels out of the garden, and spending all day barking at raccoons.

Well, to get to the section you go down this little path, the one I’m standing on, and you see that tree trunk there, that’s the Kentucky coffee tree (which the guy I live with said he planted way out here where no hose has gone before because people–you know, “people”–said the tree was “drought tolerant”, to which the guy I live with said, after several instance of having most of the tree die after a dry summer, “piffle”), well, anyway, you take a left turn when you get past that trunk and there’s a whole area back there which you’ve never seen before. Because you’re not an employee, of course.

It goes back pretty far; the corner of the back yard is farther away from the house here than on the north side. There’s even a path and everything. The guy I live with said that the purebred border collies who lived here before me made the path, and the places to look out and bark at stuff that needed barking at. There are a surprising number of things that need beings barked at. 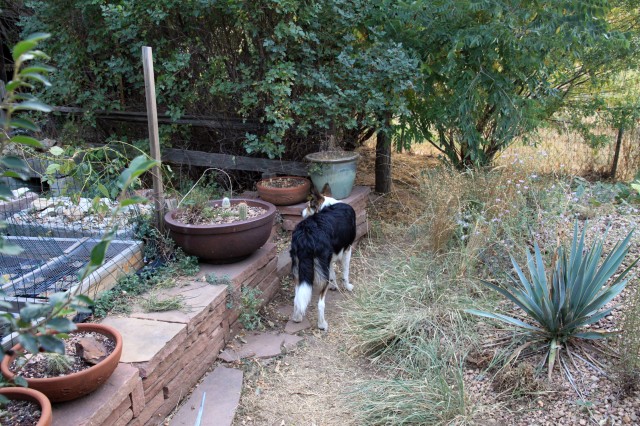 Here are a couple of other pictures, just to make the post longer.

This is looking back toward my house. It’s pretty cool that I live there. You can see how dry it is. The area on either side of my new chew bone, which is that blue thing there, and I like it a lot, because apparently even I can’t chew through it, though I’m a “chewist”, is called the lawn, if you can believe that. I’m not sure I do. 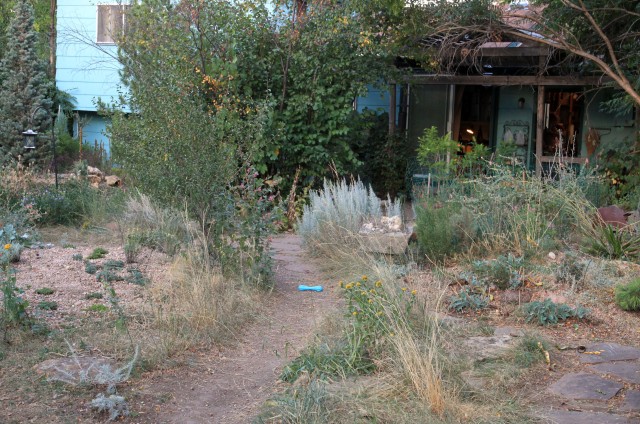 And here’s a picture of the old rock garden. I’m not supposed to go in there, but I do anyway. I know some things that the guy I live with doesn’t.

Okay, well, finally, I guess that’s pretty much it. Here’s another picture of me, standing in front of the refrigerator. The cards and stuff have been there for a long time, and aren’t very even any more. That should be fixed, but not by me. Notice my cool wolf-type shadow I cast, which explains why I’m the terror of the garden.

6 Responses to you know, because raccoon