Greetings and salutations, everyone; yes, once again it is I, Mani the roasting hot purebred border collie, filling in for the guy I live with, and here to bring you up to date on our roastingly hot garden. You may remember me from such roasting hot posts as “Beyond Super Roasting”, among so many, many others. 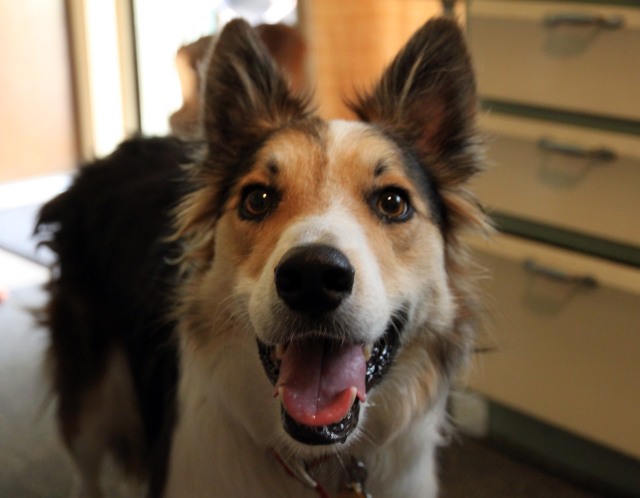 It’s been really, really hot. It does cool off at night here, which makes it somewhat bearable. But a few unusual things have happened lately.

It started to rain a little about a week ago, and thunder, and I was in my fort, and then lightning struck very close to the house. It was so loud we both jumped. I almost hit my head on the fort’s ceiling. The guy I live with thought the house, or something in the yard, had been struck by lightning, and he went out later and looked. But the neighbors who live near where we walk said the lightning struck just on the other side of the canal road. That’s not very far away.

And then the next evening, while we were walking, someone started shooting off firecrackers, and I had to go home. So the guy I live with said we didn’t have to go on our walks for a while. I’m not the one who needs the exercise. He says we’ll start again when things calm down here.

So last Thursday it turned all cool and everything. By that I mean eighty degrees, which is about twenty-seven Celsius. That’s cool, for this summer, anyway. And the guy I live with was gardening, and things were fairly excellent, until he read the weather forecast, which called for baseball-sized hail that evening. He told me how much he was against that.

So we watched the storm head toward us on the weather website. And at about nine o’clock that night, hail started to fall. Marble-sized, he said. Then these began to fall. 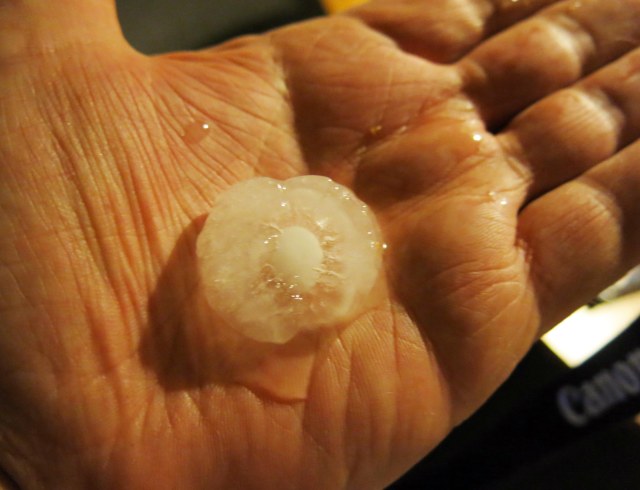 He said those were the size of golf balls, but flat. The noise was scary. Then, everything stopped. The whole thing lasted about two minutes.

The guy I live with said “Whew”, and we turned on the TV.

Then the next night, very same forecast. The guy I live with waited all day for something really bad to happen. He said there was a plan, and if you look at the post called “The Deluge”, back when Chess was here, you see that we do have a plan. Hiding in the closet downstairs.

But nothing happened. The guy I live with said that we should have gotten some rain, for all the worrying he did, but we didn’t.

So he said he wasn’t going to complain about being roasting any more. I still get to, because we purebred border collies loathe hot weather.

In other news, a mouse has been trying to get into the house. Well, not trying, actually getting in. Down in the laundry room. 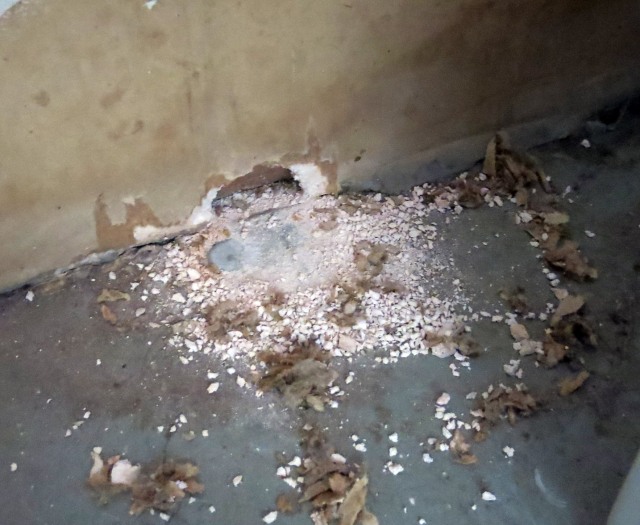 It is cooler downstairs, so maybe that’s why. We’re not getting a cat. The guy I live with says cats are excellent (I disagree), but that this neighborhood isn’t safe for cats.

It’s up to me to patrol for stuff. Just the other night, late at night, a caterpillar crawled across the patio, and maybe you know how alarming those can be. I made sure it didn’t try to get into the house. I thought, because of the name, they were related to cats. The guy I live with said they weren’t. 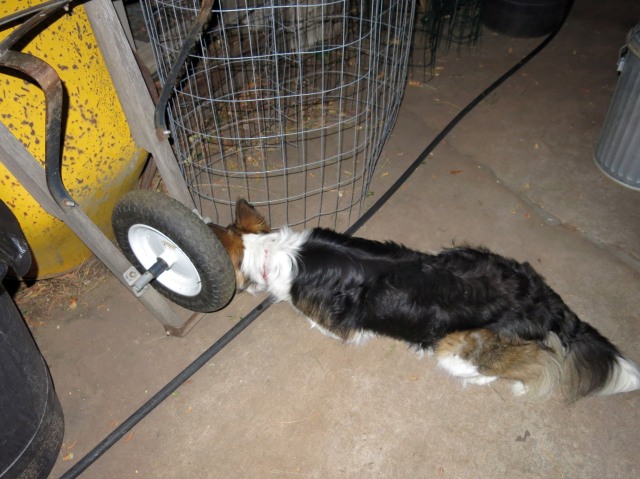 You may remember some moaning and groaning about the old desert willow (Chilopsis linearis) in the front yard. Here it is now. Taller than the guy I live with. (So, way taller than I am.) He says he’s not sure it will flower, since it seems to want to spend all its energy regrowing, which is a better idea. You can see from the sawed trunks that it was a much bigger tree at one time. 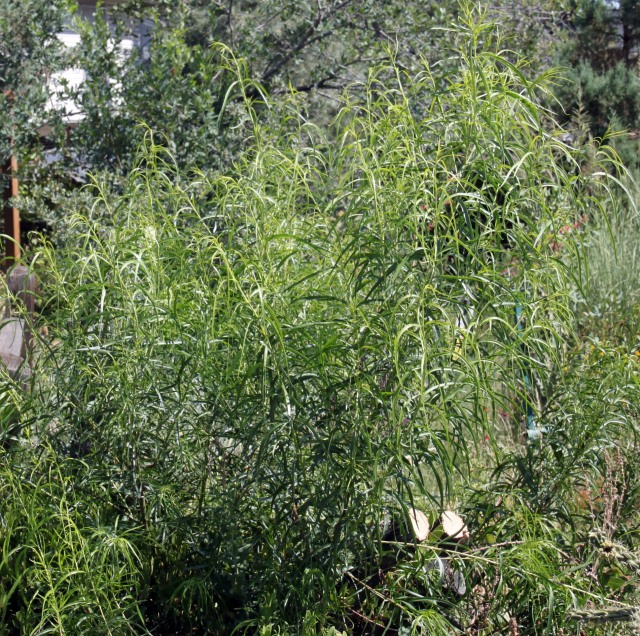 There is another, smaller one in the front yard that’s flowering now. As so is the hesperaloe (H. parviflora). It has a visitor in this picture. 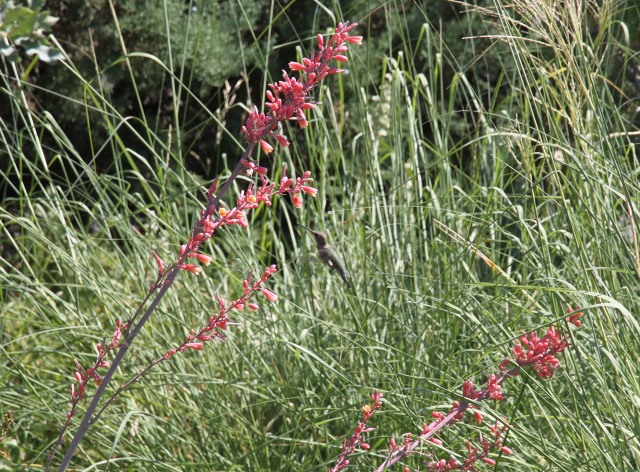 You can see the hesperaloe in this shot of our front lawn. The lawn isn’t very big. A shrub died where that empty space is and the guy I live with is still thinking about what to put there. Maybe another oak, though there are three in this picture. The sun is very bright here, at our elevation. 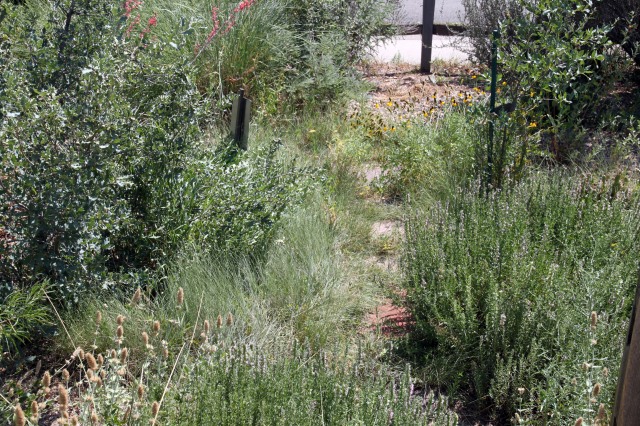 In the morning, the back patio is still cool. 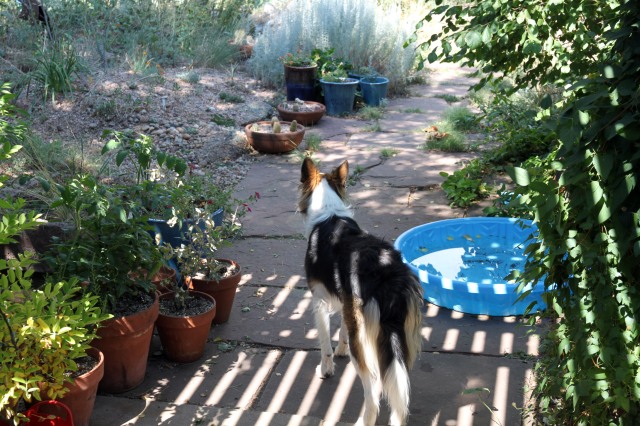 Then it gets hotter, after noon. The garden is ultra-dry and crispy. 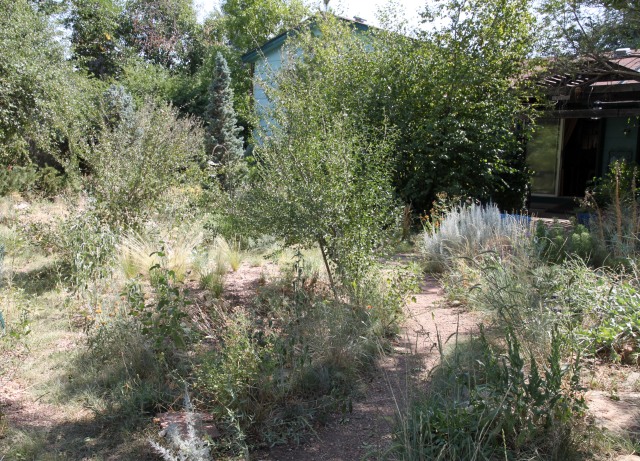 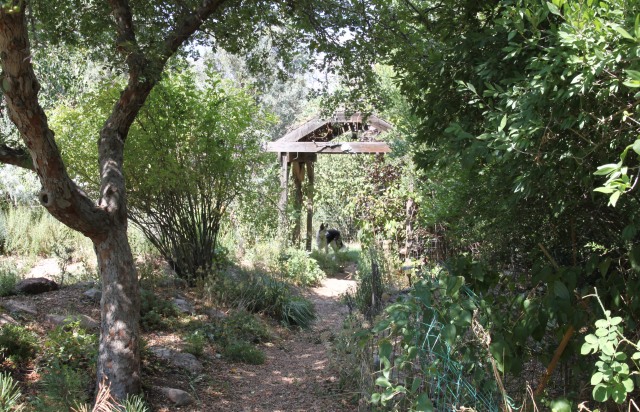 There are some plants which will tolerate the kind of summer we’ve been having, without additional watering. Here’s the desert willow in the back yard. Of course, it will grow even larger with a lot more watering, but I kind of have issues with the sprinkler. 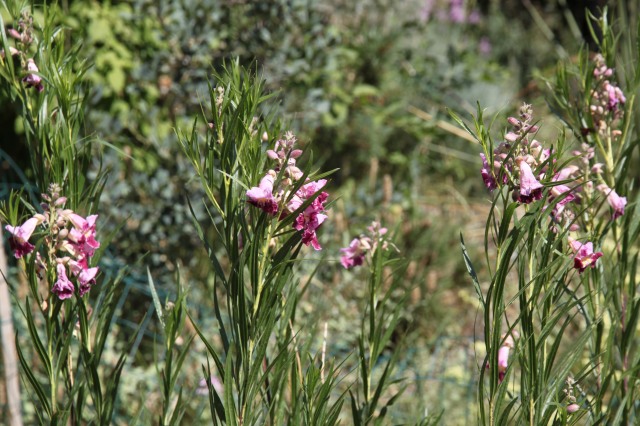 (This isn’t the same picture that was posted on Facebook.) The big desert willow out in front has pink flowers. 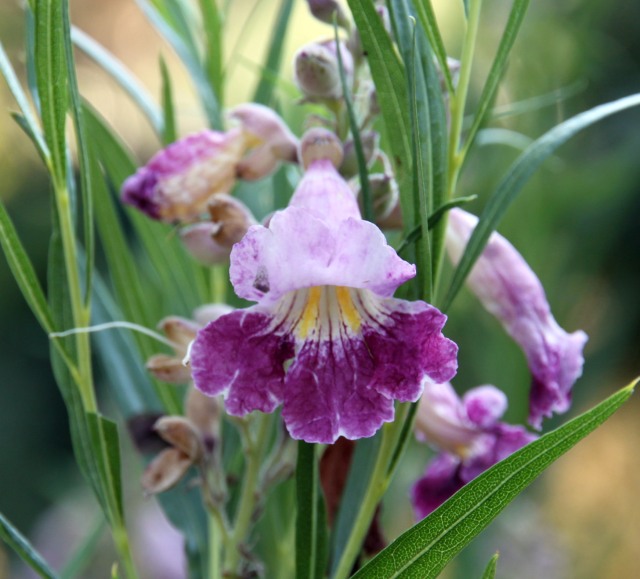 You can see how ultra-dry and crispy it is here, if you look at the drooping lilac leaves in the “way back”. The little lawn, my private lawn, does get watered from time to time, but the sprinkler never gets to the lilacs.

The guy I live with said he didn’t want to have a garden that was entirely dependent on irrigation a long time ago. Or even one in which the plants were irrigated to make them “look better”. There are a few small areas of the garden that get regular watering, like once a week, while I’m at Day Care. That is, if he remembers to water. Sometimes our garden doesn’t look as flowery as those that are watered, but, he says, “Whatever”.

You can also see in this picture that the clouds are rolling in, but the guy I live with says nothing awful is predicted. That doesn’t mean it can’t happen, but we prefer to accentuate the positive. And also, those are the foothills out there, and the mountains do have different weather. (We’re not exactly on the plains, but not in the mountains either.) 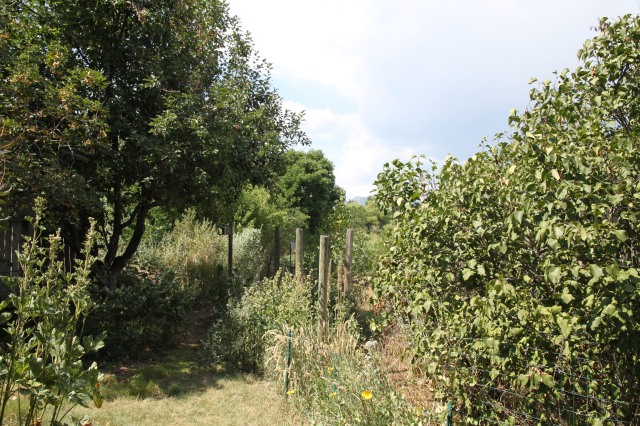 Well, I guess that’s all for today. I’ll leave you with an atmospheric picture of me. The guy I live with switched me to a new food, which I really like a lot, and that’s why there’s so much atmosphere here. 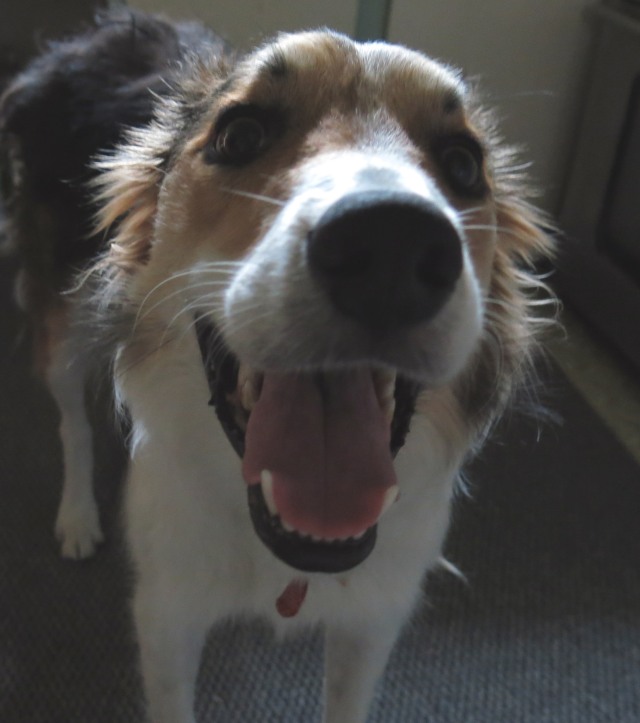