into the garden, endlessly roasting

Greetings and salutations, everyone; yes, once again it is I, Mani the roastingly hot purebred border collie, filling in for the guy I live with, and here to bring you up to date on our roastingly hot, super sizzlingly dry garden. You may remember me from such other heat-related posts as “Beyond Super Roasting”, among at least a few others.

This was taken in the morning, before it got so unbelievably roastingly hot. It was just really, really hot, and the guy I live with has some sort of allergy that’s making his eyes “all burning, puffy, and blurry”, and so he was in a bad mood today, besides being hot.

I have some pictures of the garden for you. It was so hot today that the camera almost melted. You can see a hose there, I think, but the garden doesn’t get very much hose water. It certainly hasn’t gotten much of any rain water, for months now. Except for that one time, when there was a little, but then the very next day the garden dried up again. 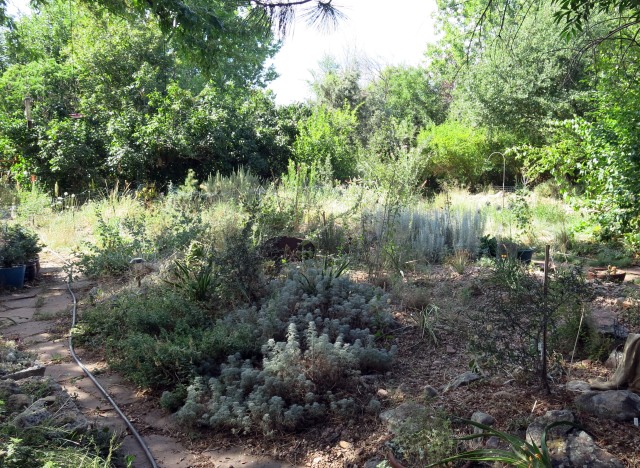 This is me on what the guy I live with says is a lawn.

If you memorize this picture, I’ll show you later what it looked like a long time ago, back when the guy I live with spent a fortune on water.

The agaves look pretty good. Maybe now you don’t wonder why this part of the garden is fenced off.

The trough patio finally got cleaned up on a day when it wasn’t a zillion degrees out. The seed pots were emptied, after sitting there for a couple of years, and some of the troughs were moved. They weigh a couple hundred pounds each. The dirt still needs to be swept up.

Maybe you can see that the flagstones in the middle are laid out like the rays of the sun. The lady of the house designed this, but the guy I live with set these after she was gone. He didn’t know exactly how they were supposed to go. But you can see the “sun”, the two curving tiles by the brown pot there, and then the “rays”. Sort of.

The lawn in the “way back” gets some water, but it’s still a bit crisp.

So, well, it is kind of tiresome to talk about how miserably dry and pathetic the garden is, and so we decided to show you some pictures of how it looked before. (Before the lady of the house died, is what we mean.)

I’m posting these to make me feel cooler. They are also a bit sad. But I’m being selfish since it was so horribly hot today.

This is Flurry, when he was really ancient, lying on the green lawn. There really was a green lawn here. They called it “The Great Lawn”, after English gardening books. This was about fourteen years ago. It doesn’t look very roasting hot to me. And that tiny puppy on the left is Chess.

This was the “Long Border”. The guy I live with took this out the year after the lady of the house died. He always wanted a dry garden there instead, but she liked this so much, he kept it, even though it needed huge amounts of water. No one ever paid any attention to it when they came over to see the garden, and when he took it out, everyone said how much they liked it. 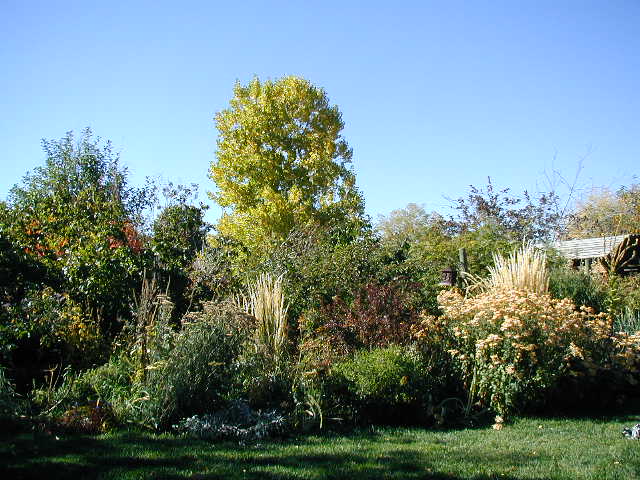 How it looked in autumn. 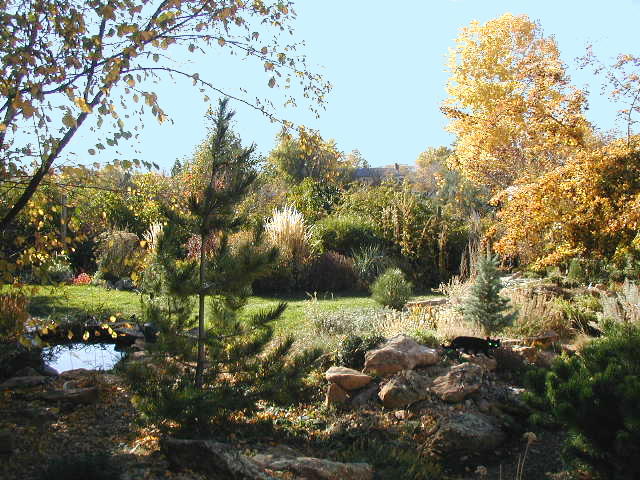 Flurry again. The pool was filled up. It was a lot of work to maintain. I heard this story, though, that when Chess, the border collie who lived here before me, showed up, on his very first day, he fell into the pool. And liked that a lot.

Kind of a pleasant autumnal picture, don’t you think?

The guy I live with doesn’t feel like saying whether he likes the garden and “lawn” that replaced this better, or not, but the way it is now requires a lot less watering, and that’s good.

Okay, one more cooling-off picture. A spring snow, on The Great Lawn. This is Slipper, on the left, about to attack Flurry, who was really too old to be attacked. But it happened anyway.

I thought a nice cool interlude would be good. I know I enjoyed it, even though I wasn’t in any of the pictures.

Back to today, now. I had planned to talk about how endlessly hot the weather is, and that’s pretty much how things go these days, though this evening it got really dark, and thundered, and started to rain.

The rain didn’t last very long, but it cooled things off quite a bit. You might also see that the small tree that used to be in the middle of pictures like this isn’t there any more. There’s a reason for that. It was removed. I’ll talk about that some other time.

It thundered quite a bit, and I know enough not to be outside when that happens. I’ll leave you with a picture of me not being outside when it’s thundering.

6 Responses to into the garden, endlessly roasting