Greetings and salutations, everyone; yes, once again it is I, Mani the purebred border collie, filling in for the guy I live with, and here today to talk about our garden again. You may remember me from such posts as “Our Winter, Thus Far”, among so many, many others.

I know I just posted yesterday, but the guy I live with has been getting very antsy about winter, which he claims will never end, and so he thought another post might be in order. He suggested the title. He said using the word “diverse” when “divers” is meant makes him slightly crazy. That’s the sort of thing he thinks about.

You can see there’s still snow in the back yard. This drives the guy I live with right up the wall. So that’s another thing that gets to him. He says it’s unnatural and that the snow “should” be gone. And when it doesn’t go away and then snows again, he gets even antsier. (I’ve had ants crawl on me so I know what that’s like.) The sun was out for a while, and then it got all gray and dismal. This is the garden all gray and dismal. 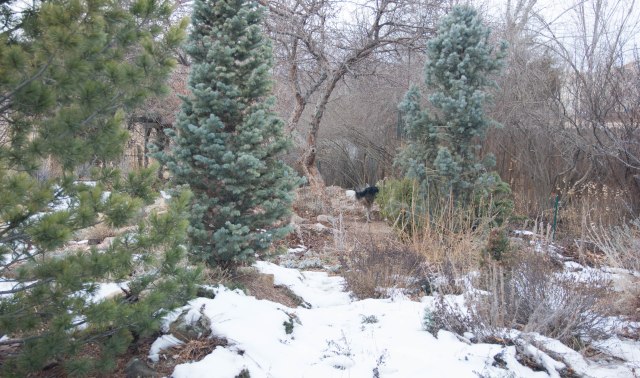 This is me licking the snow. I’m not supposed to be standing in the rock garden. But it has the best-tasting snow.

He took some pictures of plants, too, even though he said the light was awful.

A dwarf Cercocarpus ledifolius. The guy I live with said to say it really is a dwarf, and not a small regular-sized one. Not hugely photogenic, I think. Yucca rupicola is behind it. 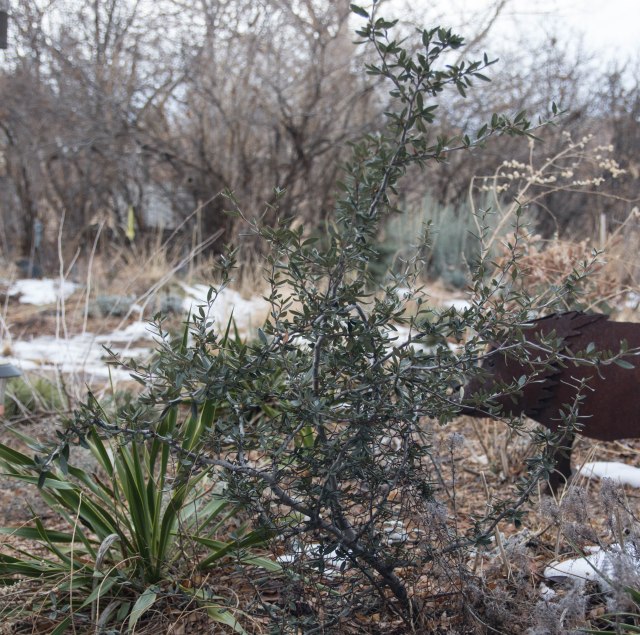 So then he went into the front yard to see if there was anything interesting there. This oak also isn’t very photogenic, but it gives a good idea of what the oaks here look like in winter. Its acorns are the size of a pea.

That’s a wavy-leaf oak, Quercus undulata. It’s not very tall. There is a taller one behind. Here’s the taller one. Its acorns are much bigger.

The big Arizona cypress, Cupressus arizonica. It has cones at the top.

This Mahonia (or Berberis) aquifolium was self-sown. There’s a old plant up the street so that may have been where it came from. Some leaves stay green, some turn chocolate brown in the winter.

The guy I live with did notice the creature in the last picture, if you were wondering.

It wasn’t very cold today, and so the guy I live with did some raking. I like it when he works out in the garden, which he doesn’t do much of during the winter. The path by the shed is extremely icy. His friend gave him some YakTrax which he can wear on his shoes so he doesn’t slip on the ice, but there wasn’t much work to do in the garden besides raking, and none that involved walking on ice.

There was a lot of mud in the garden today, too, and I got to run around in it.

Which was fun for me, but the guy I live with shampooed the living room carpet last week, and, well….

It was fun, though.

The guy I live with spent some time downstairs, in the studio, to admire his work, and he brought this thing back to the kitchen. It’s a sieve for separating chaff from very fine seed. Custom-made, too. The square of duct tape is where it was torn and repaired. He thought this had been thrown away. 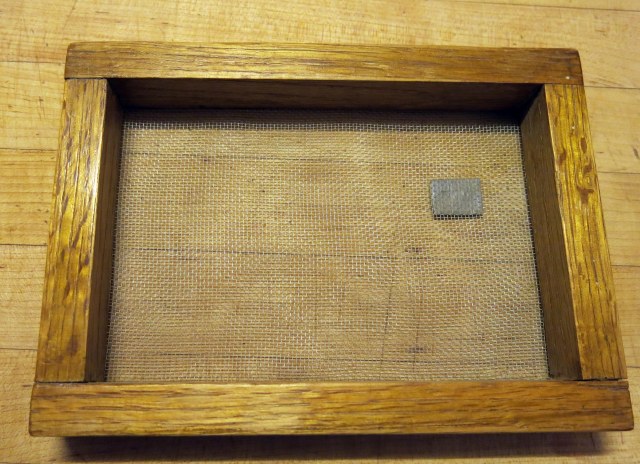 You can see the care with which this was made. 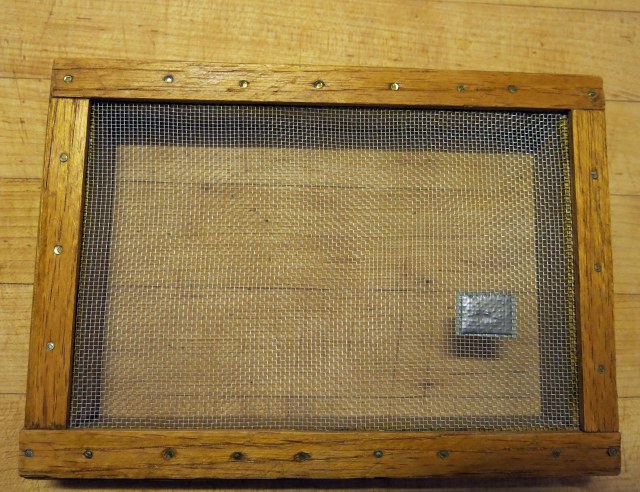 There are other sieves here, in the shed, made of steel. But this one is special. It will be put to good use again, I’m sure.

Coyotes sometimes sneak down the creek bed at night, but mostly they use the paths. There’s a path on the right side of the creek, which I’ve shown before, the one that Chess used to go on, before I came here, but the other one goes behind the houses on the east side of the creek, including ours. 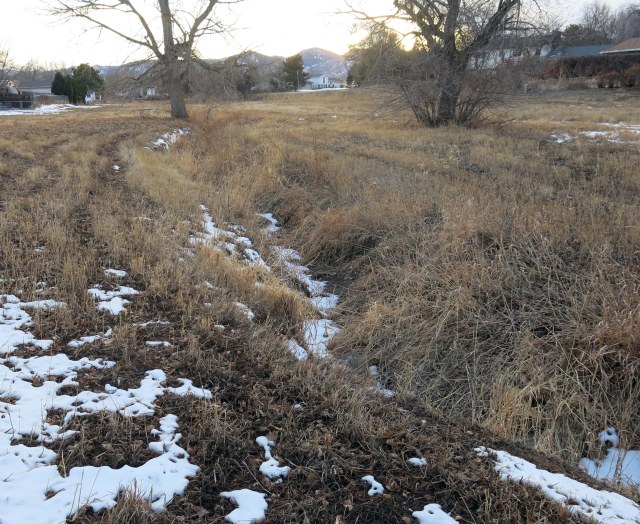 We walked behind our house so you could see the squirrel-feeder wheel thing. The corn is mostly eaten now, as you can tell. There’s more corn in the garage.

About this time of the evening, ducks begin to fly from the west to the southeast. There are some larger lakes there, I guess.

You can see them here, too. You might have to squint. The guy I live with says that this is a melancholy view. He says he’ll explain that to me later. He also said not to tell readers to squint, when they can just click on an image and enlarge it, which they already know.

This seems like a good place to stop, for now. A last picture of me, heading toward the setting sun. 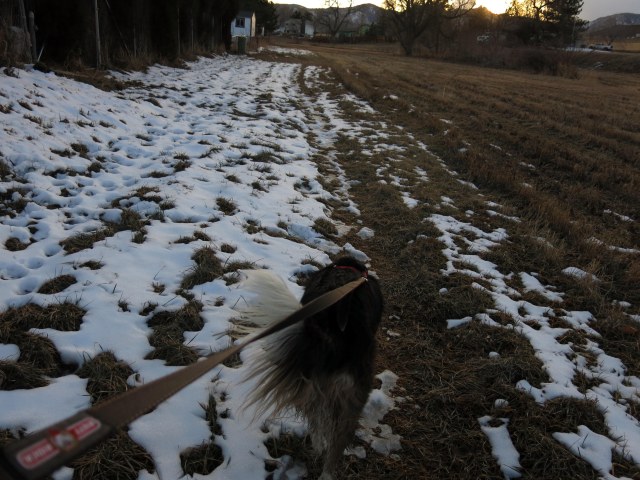