Greetings and salutations, everyone; yes, once again it is I, Mani the purebred border collie, filling in for the guy I live with, and here today to talk to you about our weather. You may remember me from such weather-related posts as “A Misty Day”, among so many, many others.

Here I am in a characteristic pose. I am of course rather damp.

It’s been misting, drizzling, then raining, all day long, which is why I’m damp, and also why I spent time lying in the bed. It’s what you do on a misty, drizzly day, if you didn’t know.

You can see that it’s raining in this picture. You can also see the water running down the dirt path. The soil here is so dense that water just runs off it. When you get back to about where the shed is, and the fence you can see which marks the eastern side of “the enclosure”, the soil is the native soil (instead of the “trucked-in clay gunk” that the developer spread around the house). The native soil is creek-bottom soil, made of decomposed sandstone.

View from the patio. I already talked about the wrought-iron furniture. That ashtray has been there for years. It was broken in half, so it just sits there. 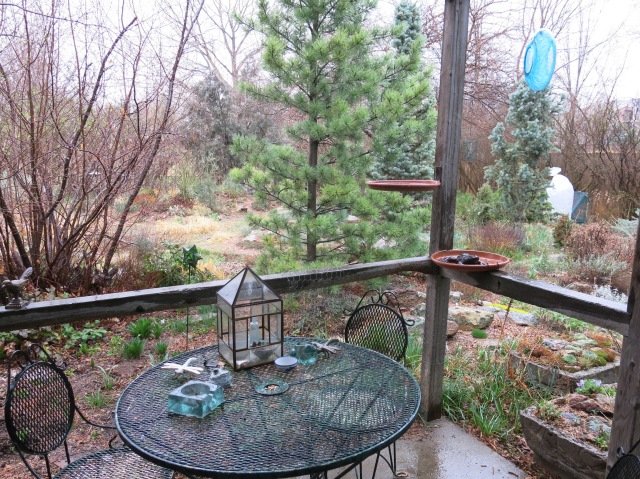 It matches the color of the frog on the table, though. 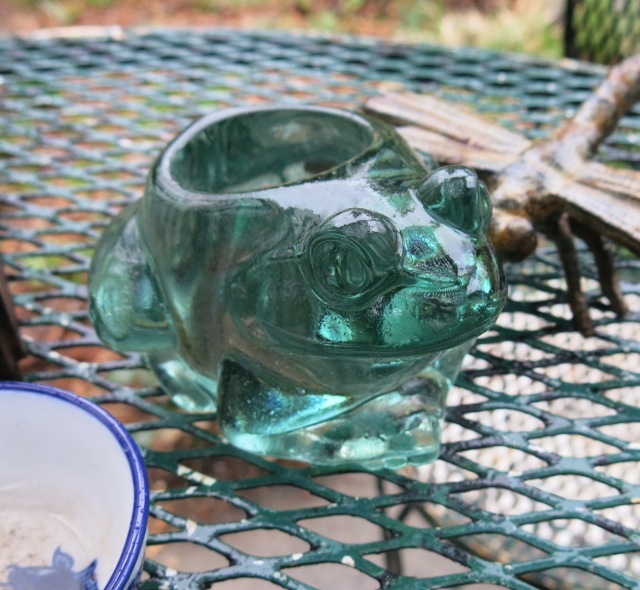 But not this one.

It turns out that there are a lot of frogs in the garden. They were here when I first came here. They’re not real, so I don’t have to worry. 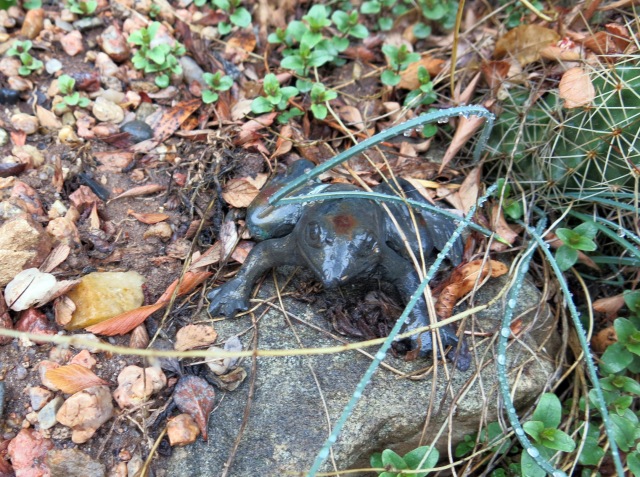 This one lost its nose, somehow. 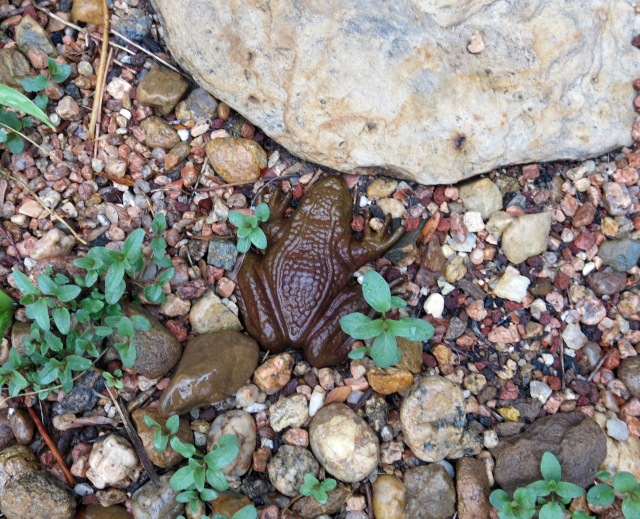 There are more. But back to the table for a minute. You may have wondered about that glass box, or case, that you see in every shot of the table. It has things in it. That thing on the left is a “really stinky candle”, according to the guy I live with. And an antique bottle, a dish filled with sand with a coin in it, and two weird pieces of wood. He doesn’t know why these are in this glass case. But they are.

Anyway, we worked in the garden while it was misty. I liked that a lot. He sowed a lot of annual seed, just by scattering it on the ground. That sometimes works, he said.

He also transplanted a few things, the way he does every year. That explains why there are fewer plants in the garden every year. But he said all the rain will eventually get down to the roots of the transplants. 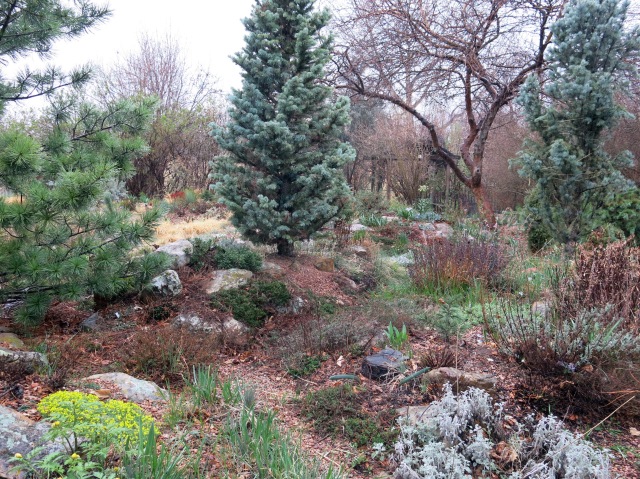 You can see the water running down the path. And the “portable greenhouse” at the left. It’s just sitting there, for now. 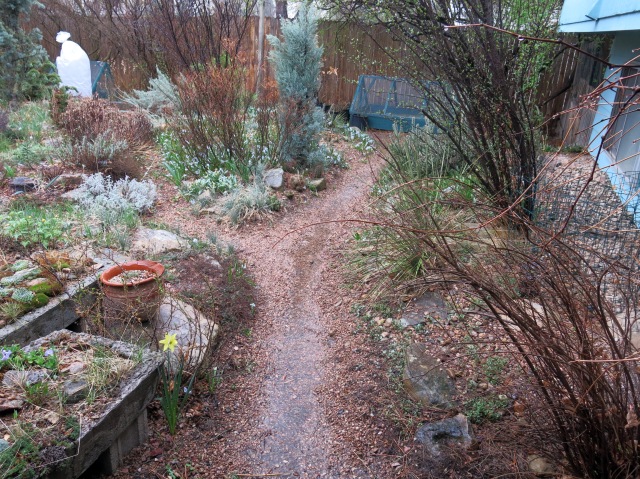 The shade garden is so packed with plants people can barely get through it. Lots of hellebores in flower at the far end. This garden will look totally different when the bulb foliage (mostly snowdrops) has withered.

Daphne arbuscula (there are several in the garden) is flowering now. The color in this picture is “all wrong”, and the guy I live with doesn’t know why the point-and-shoot messes up the color, but it does, and always has. (Doesn’t happen with the DSLR.) He tried about a zillion settings on the camera but all the pictures came out like this. Maybe because the red from the fallen hawthorn leaves throws off the camera, the way the red in the soil does. The flower color is really pink. There’s something about “white balance” in the camera instructions, but …..

There’s a tuberous geranium flowering too. The guy I live with thought he needed to sort of point to the flower. This is Geranium linearilobum subsp. transversale. He says it’s okay to think this is funny. 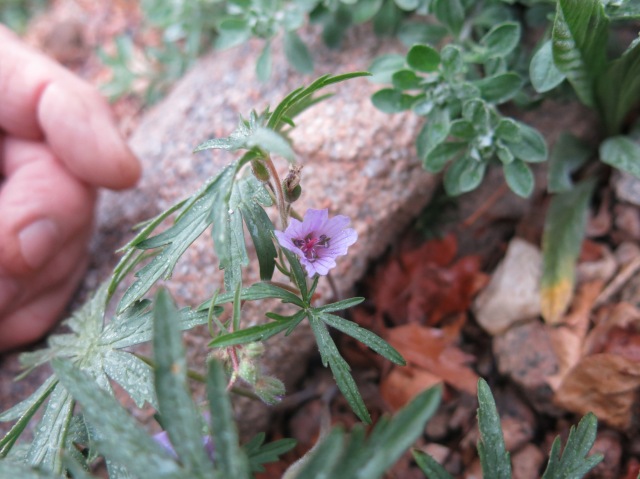 On the other side of the garden, there’s a mysterious tiny narcissus flowering. He doesn’t know what this is, or how it got there. 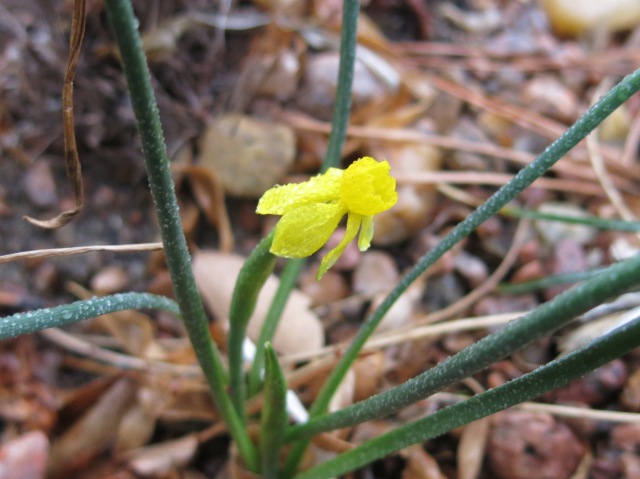 The rock garden is getting greener by the day. (The fence on the left really is leaning that much. The posts were not put in very deeply.) 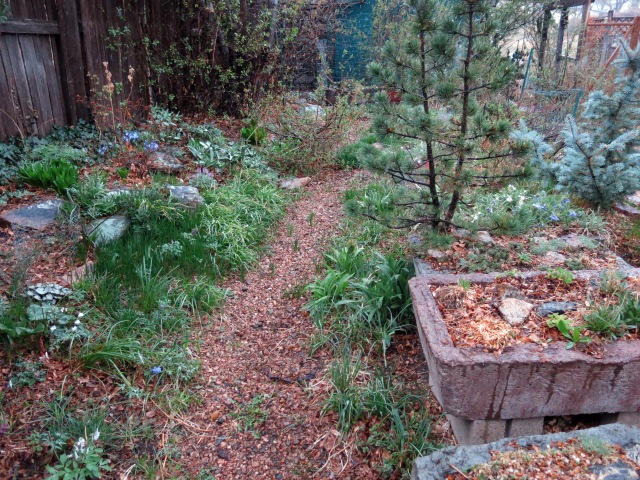 A pink cyclamen (Cyclamen coum), but it looks whitish with the point-and-shoot.

The “enclosure”, with the medium-sized big metal chicken. It’s leaning because the yellow jacket nest was removed. Well, that’s not why it’s leaning, it’s because it wasn’t put back in its place, properly. This little garden gets regularly watered, as maybe you can tell. Vinca minor has taken over almost completely. This area hasn’t been cleaned up yet.

And here’s the “trough patio”. The guy I live with says it’s going to remain unfinished. The area on the left does need a low fence around it, but probably nothing else will be done here, except some sweeping, which it obviously needs. I don’t think the ants are all that scary, either. 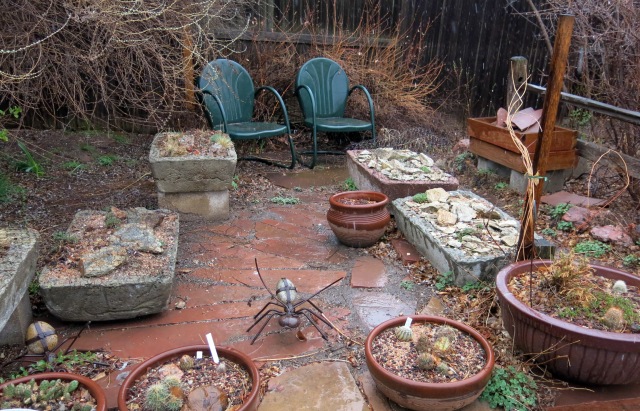 It’s supposed to snow early tomorrow morning. You can imagine what’s been said about that, already. Hopefully not too much so that trees aren’t snapped in half and other horrible things like that.

So that’s why these pictures were taken. Kind of to prove that it does rain here in the spring, like last time, even though the rain will turn to snow tomorrow.

It’s almost time for me to let you go. The guy I live with got out something called an umbrella, which I’d never seen before, to walk around and take these pictures (even though they were too red). I didn’t much like the looks of the umbrella, and it was raining quite a bit, so I did the sensible thing.

5 Responses to before it snows