Greetings and salutations, everyone; yes, once again it is I, Mani the purebred border collie, filling in for the guy I live with, and here to bring you yet another weather-related post. You may remember me from other such weather-related posts as “This Is More Like It”, among so many, many others.

Here I am in a characteristic pose. This was taken this evening. I’d just finished a biscuit, on the couch.

I know I’ve already talked about the couch, but I like it a lot. The guy I live with takes naps on it, sometimes, in the afternoon, like he used to a lot, when Chess was here, getting old; they’d listen to an opera and fall asleep. He said that was called “Opera Day” and they both liked it a lot. We haven’t had an afternoon like that, yet, but we have taken naps in the living room, and that was pretty great.

Well, it snowed. The guy I live with wasn’t able to control the weather, like he was last time, and so this is what it looked like this morning. 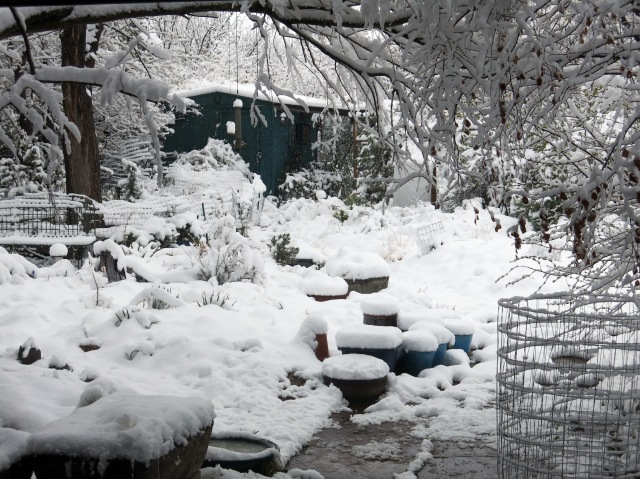 That rolled-up “rabbit fence” was to put one of the patio rugs on, to dry it out after it rained the other day, and now I guess it’ll need to be dried out again.

It wasn’t very cold this morning; just snowy. The snow stopped later in the morning.

There was water in the creek, a lot of it. And also in the canal. This is the time of year when the water in the canal starts flowing; it flows until October or November. There are fairly big fish in the canal, and also crawdads, some of which are not small. I’ve seen crawdads; they have big pinching claws.

You can see the creek in the upper right hand corner of this picture. It makes a turn to the left (north), and then goes under the canal, in a culvert.

The willows are always interesting.

In this picture, you can see our back yard. It’s the chain link fence in the middle of the picture. The pine tree is in the neighbor’s yard. There were raccoons in it the other night. 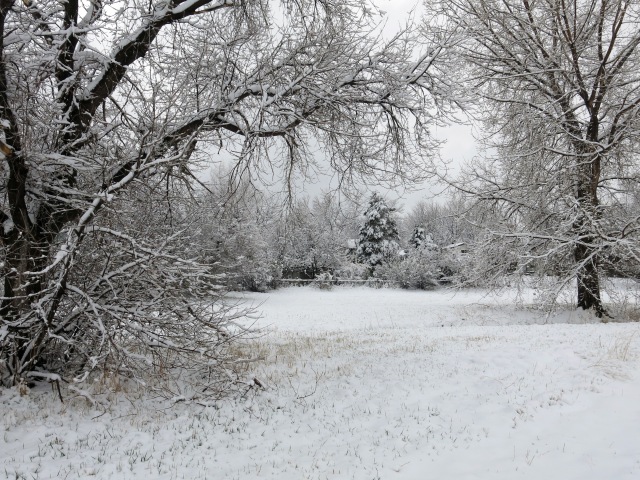 Nothing really happened for the rest of the day. The guy I live with went to the store, and came back.

Then we went on our evening walk. We followed the coyote trail which is pretty close to the back fences of all the houses.

In fact, there had been coyotes there not too long before we walked down the path. Some of those paw prints were not mine.

When we got back home, it snowed again, and now the garden is covered with snow.

That’s pretty much it for today. I just wanted to bring you up to date on our weather, which, as they say, is changeable. The guy I live with says that tonight will be the coldest night in about five weeks, and he’s not hugely thrilled about that, but there isn’t anything I can do about it. I like the snow, anyway.

10 Responses to a snowy day