Greetings and salutations, everyone; yes, once again it is I, Mani the purebred border collie, filling in for the guy I live with, and here to bring you up to date on the latest news from our garden. You may remember me from such posts as “Not Spring”, among so many, many others.

Here I am in a characteristic pose. You might be able to guess what’s happening here. The guy I live with was unwrapping something for me. 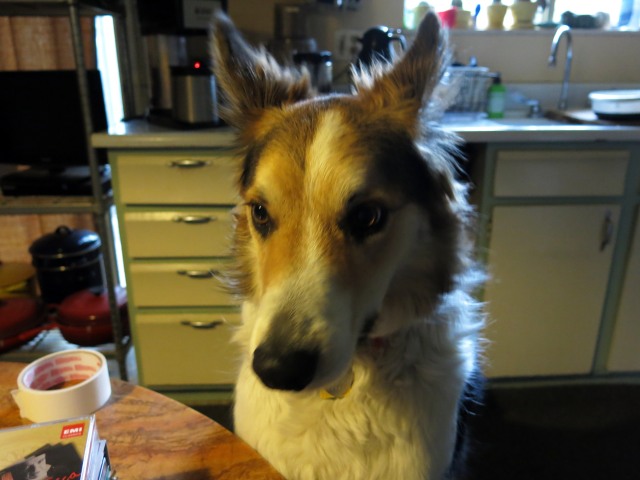 But then, he just had to play that biscuit-on-the-head thing.

Of course I got my biscuit, but I think we could have shortened the time between unwrapping and me being able to crunch on something totally excellent.

Well, they say it’s supposed to snow at the end of this week, and I bet you can imagine the complaints I’ve been hearing about that. The guy I live with says that “April should not be colder than March”, but I think he thinks that the weather should do what he wants it to, and not what it just does.

Still, things are flowering, just like they always do. The rock garden, the one called “Mount Zot”, is full of flowers. Arabis and daphnes, mostly.

The buffalo currants, Ribes aureum, have been scenting the garden for weeks now. They smell like cloves, according to the guy I live with. I don’t know anything about cloves. There are some things I don’t get in my food, and I guess cloves are one of them. The currants are said to make really good raisins (another thing I don’t get), but the birds get them first.

There are lots of fritillaries flowering now. Or, if you want to sound really in the know, “frits”. Here are some of them. These pictures were taken with the “big camera”, in case you were interested.

The guy I live with stepped on this one, so he had to hold it up with one hand, and take the picture with the other. Poor frit. I sometimes step on plants, and I don’t hear about it as much as you might think. Just this evening the guy I live with was fertilizing the daffodils out in the “way back”, with an organic tomato fertilizer, and I just lay down in some flowering daffodils, and he didn’t say anything. He was probably mad because he didn’t have his camera with him, to take a picture of me being all charming and bucolic, lying in the daffodils. I really wanted to try the tomato fertilizer, too, but the guy I live with said not to.

But back to the frits. These next two have flowers about the size of thimbles. I’m not sure what a thimble is, but it must be small, because these flowers certainly are. 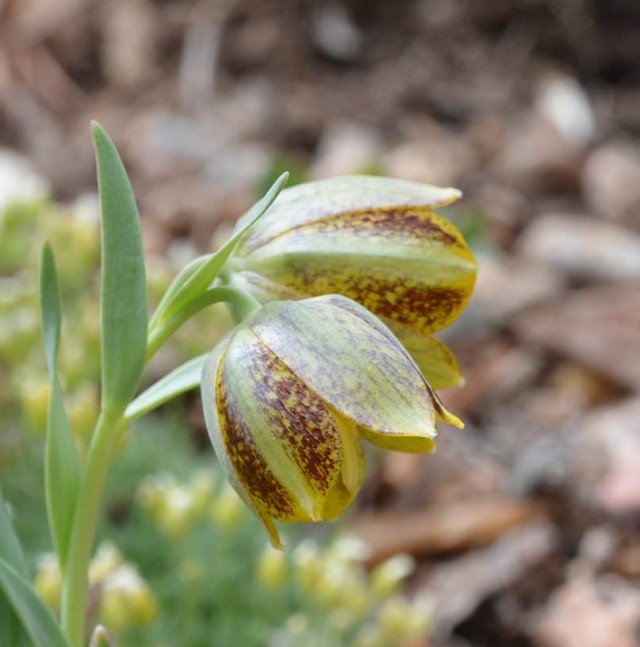 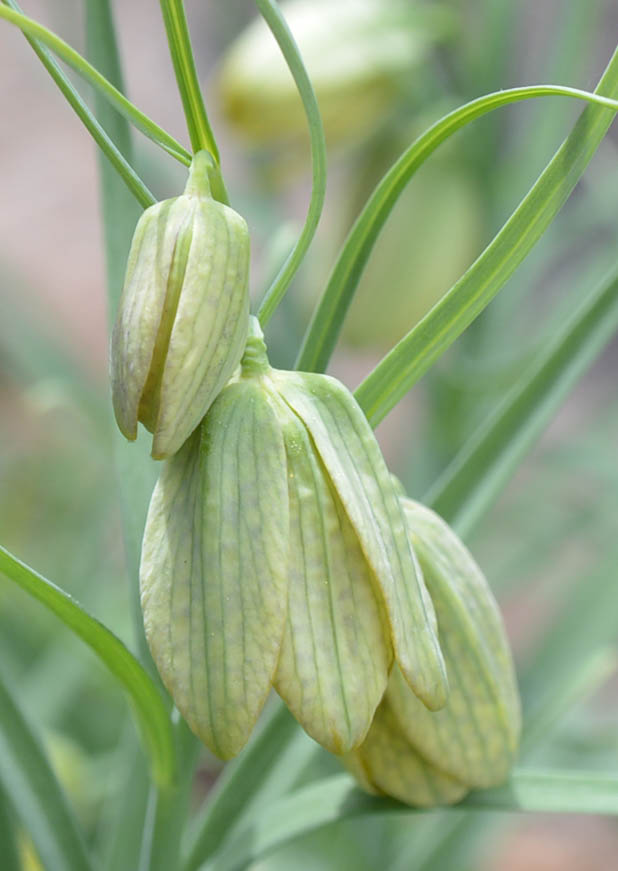 So those are the frits. There are even more in flower, but they didn’t get their pictures taken.

The tomato seedlings have perked up. The guy I live with said he made a mistake transplanting them into mushroom compost; he should have used his own, which is in a trash can out on the patio. He’s made his own seed compost, or “soil-less mix” now, for decades. I guess the seedlings will be transplanted again, because the stems of some of them are rotting. 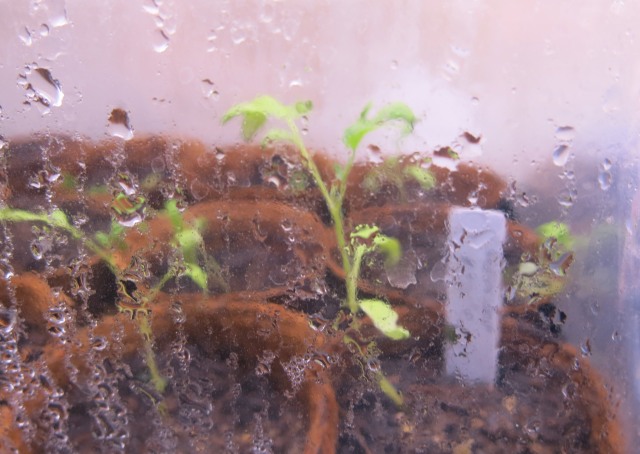 That’s really all I had for today. There’s been an awful lot of weeding going on (“Worst year for bindweed I’ve ever seen”) and various other things, which I get to help doing. Mostly by just lying around, watching.

I got a cow ear later this evening. Cow ears are pretty good, if you didn’t know. It helps to make them all soft and juicy first.

So that was my day. It was pretty good, all in all. After my cow ear, I got another biscuit, and then I got out one of my toys to celebrate.

8 Responses to a bit chilly