Greetings and salutations, everyone; yes, once again it is I, Mani the purebred border collie, filling in for the guy I live with, and here to bring you up to date on the news from our garden. You may remember me from such posts as “Not Spring”, among so many, many others.

This isn’t the old biscuit-on-the-head ploy; I was just thinking about things, the way I do.

I spent almost three days at Day Care this week. It wasn’t technically Day Care, though I did get to participate in that. I spent two nights there, because the guy I live with and his friend went to a place called Santa Fe, where he talked. I’m not sure why they had to go there to talk, because he can certainly talk here. Oh, can he talk.

I guess they had a good time. The guy I live with said he saw something called a roadrunner. He’d never seen one before. There wasn’t a coyote and an anvil, either. (I didn’t get that part.) They went to Agua Fria Nursery (he didn’t get any pictures there), and also Plants of the Southwest. The guy I live with would like our back yard to look like this.

He said he really liked both nurseries.

The place at which they stayed was surrounded by junipers and there was mistletoe growing in them. 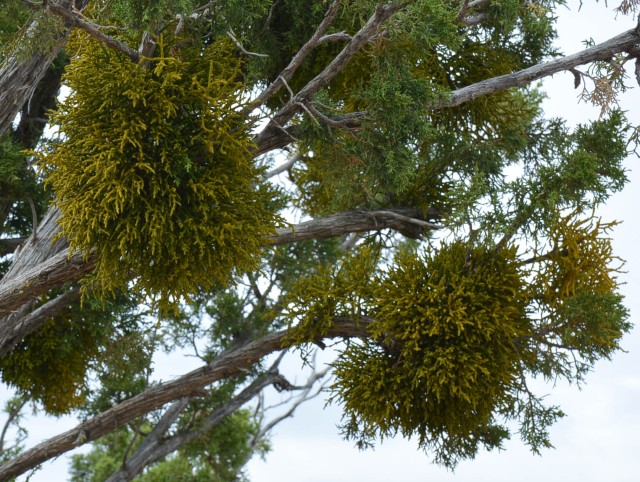 He said it had the texture of hard rubber. It’s hard to imagine.

They saw pronghorns, which are a kind of antelope, on the way back. They’re there, you just have to look. (This picture was taken with the point-and-shoot set at bursts, while they were driving along at about eighty miles per hour. That’s a hundred and twenty-eight kilometers per hour.) 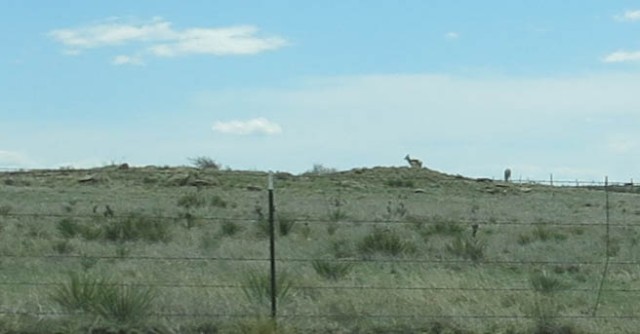 So they came home. Not much has happened since then. It was a lovely spring day, yesterday.

Today, and I know this will seem an awful lot like a metaphor, I was worried that the guy I live with had given up on me. I was all ready to go on my walk, wearing my harness, and nothing was happening. You can see how pathetic I look.

I did get to go on my walk (he’d just forgotten something he needed to bring with him on my walk), so this sad look was entirely wasted. I bet I can use it again, some time in the future.

But no one here is hugely happy right now. This is what the back yard looked like about an hour ago. 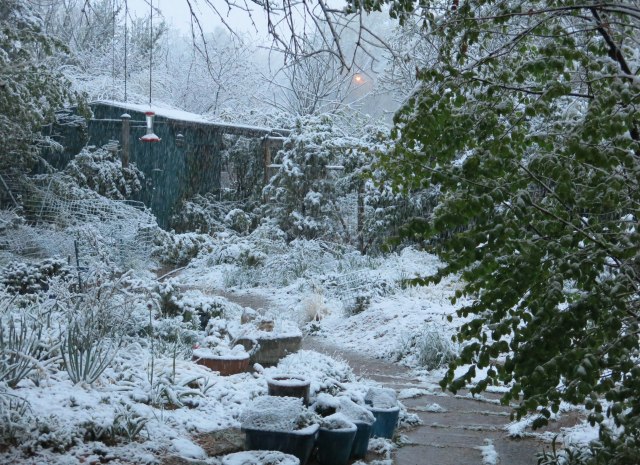 They say we’re supposed to get about a foot of snow (that’s thirty centimeters) and maybe the coldest temperatures in almost two months. The guy I live with really loathes snow at this time of year.

Of course there isn’t much he can do about it. My approach is to have a biscuit on the couch, very close to my Lamb Chop, and take things as they come.

12 Responses to mistletoe and snow