Greetings and salutations, everyone; yes, once again it is I, Mani the roastingly hot purebred border collie, filling in for the guy I live with, and here to bring you the latest broiling news from our garden. You may remember me from such heat-related posts as
“Not Only Roasting, But Gloomy”, among so many, many others. 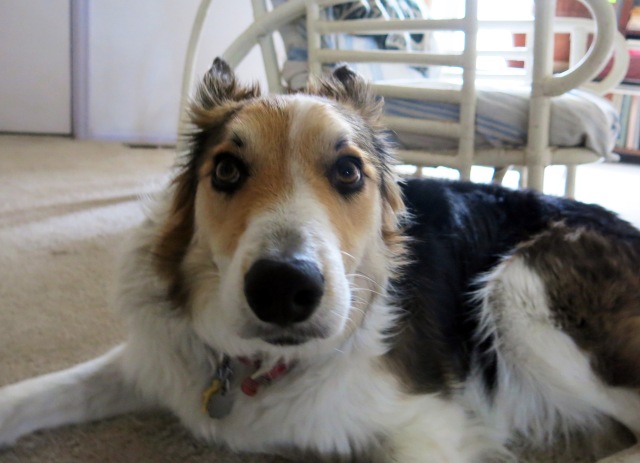 I kind of got in trouble last night. A big sphinx moth flew into the house (an Achemon sphinx, the ones that come from copper-colored caterpillars), and the guy I live with spent quite some time trying to catch it with the net. He finally caught it, let it go, out on the patio, and it flew right back into the kitchen. So the guy I live with chased the moth with the net again, caught it, let it back outside, and I grabbed it and ate it.

He was really angry with me. I thought his head was going to explode. Especially since there was another incident earlier in the evening, when his friend was here for dinner, and, well, I’m not allowed to talk about it.

Speaking of being a dog, we purebred border collies do not like hot weather. Right now it’s ninety degrees Fahrenheit (thirty-two Celsius), with thirteen percent humidity. The guy I live with says the weather will be hot for a while. So here I am, roasting.

I have the pool, but I don’t go in it. The guy I live with says I should, but I don’t. Unless it gets filled with water, and then I go in, when the hose is running. This picture sort of makes it look like I have the pool in my mouth, but of course I don’t. 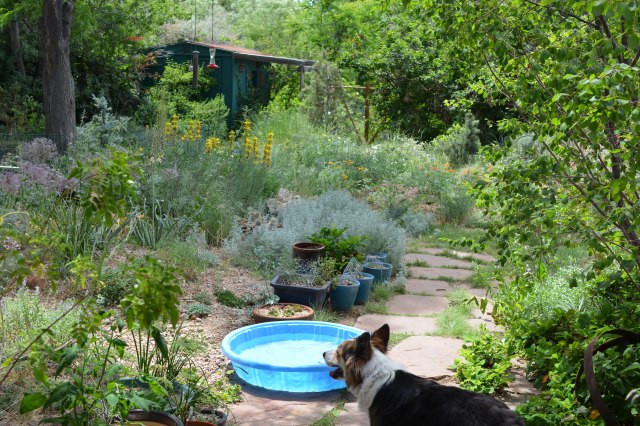 When I go on my walks I can see the ducks in the neighbors’ yard. There have been ducks there for years. I don’t know why ducks don’t land in the pool here. The neighbors have a pool and the ducks like that.

Things are changing on my walks. They mowed along the canal road. The grass is already dry and prickly. 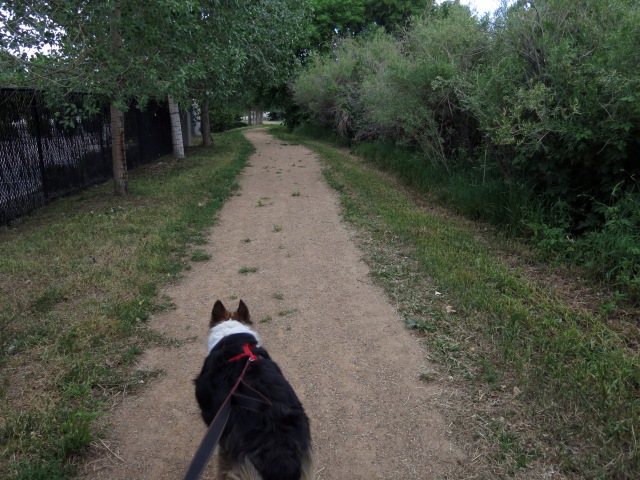 In the field, though, the grass is getting higher. 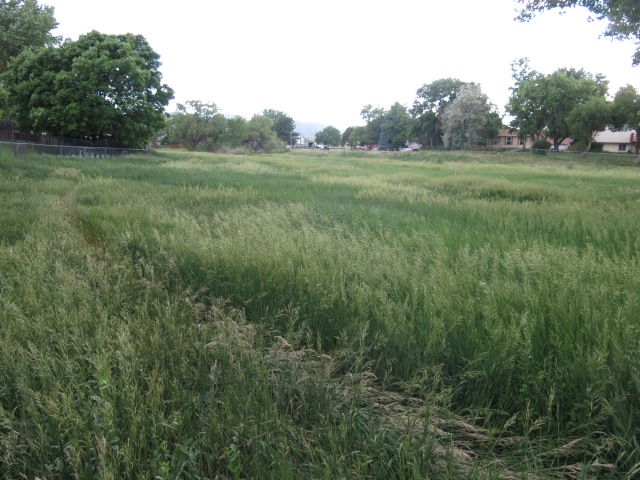 There are two tracks here because a truck drove through here the other day. It was driven by someone who was authorized to drive through here, so we didn’t worry. But it was hard to tell which track was the one made by Norm and Celeste, the coyotes. It turned out to be the one I’m on in the picture. 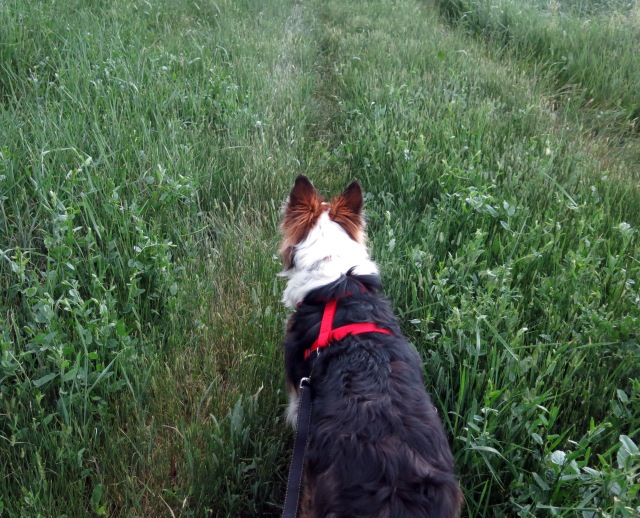 Back at home, things are getting even more jungly, but it’s also so dry that some plants are beginning to suffer a little. I’ll only show the non-suffering plants. I’m also supposed to show pictures of the garden.

This is the path on the north side. You can see all the way to the “way back”.

The mockorange (Philadelphus lewisii) is scenting the garden. This garden, on the south side of the house, is blazingly hot.

The rose ‘Darlow’s Enigma’ has burst into flower.

Now for a bunch of cactus flowers. 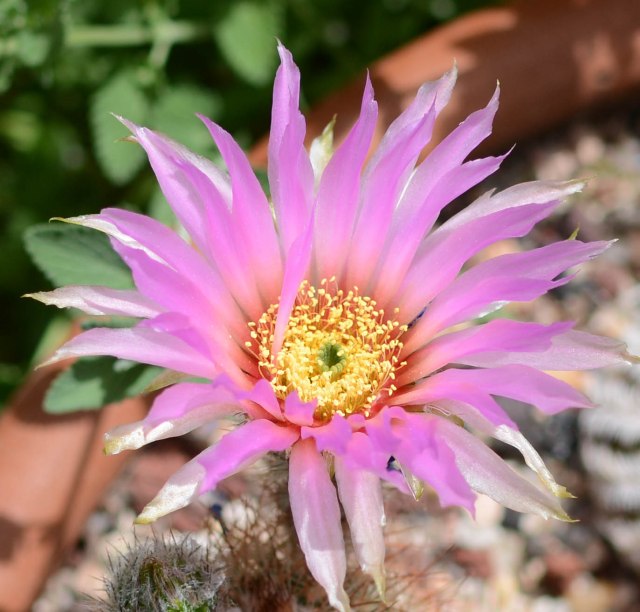 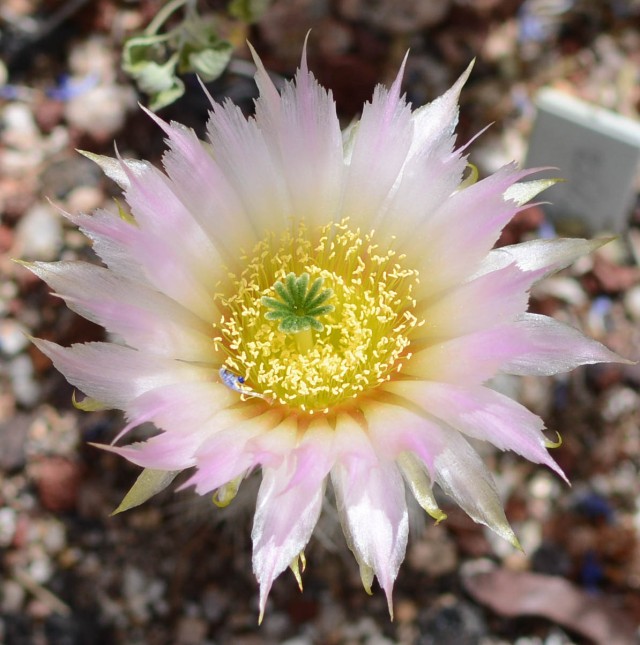 These are flowers of hybrid echinocereus which the guy I live with got at Timberline Gardens the year before it closed.

These next ones really are this color. I can’t see red, but the guy I live with assures me it’s this color.

A pink-flowered sphaeralcea appeared in the garden, too. Maybe pink-purple.

And the gaillardias are beginning to flower. The guy I live with said he always had a hard time keeping them in the garden (I wasn’t sure if he meant they ran away, or what), but now they’re growing very well here. Seed was sown directly into the heavy clay in the middle of the lawn. I’ve already explained how the native soil isn’t clay, and this stuff gets rock-hard in the summer. Rain never gets it very wet. 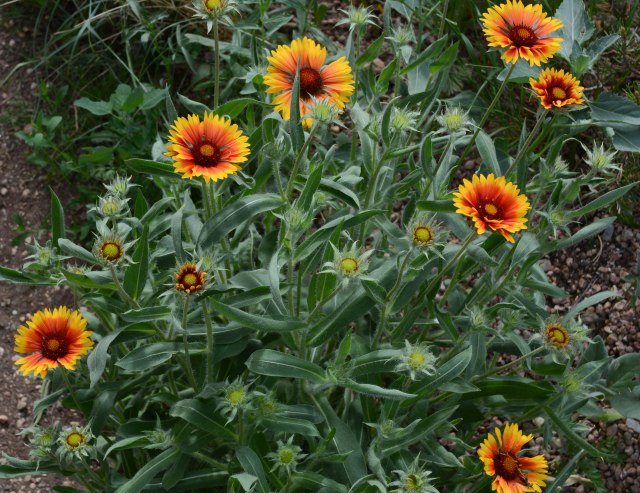 I guess that’s it for today. I’ll leave you with a picture of me lying on the patio rug in an “Egyptian” pose. You can see that I’ve been enjoying a pine cone or two. I especially like to do this after the sun goes down, and it’s cool on the patio, while the house is still hot. 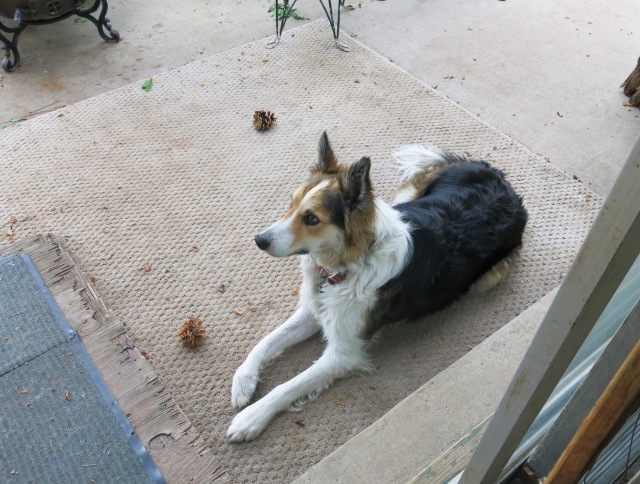 10 Responses to the heat wave