Greetings and salutations, everyone; yes, once again it is I, Mani the purebred border collie, filling in for the guy I live with, and here to bring you up to date on what we’ve been doing. You may remember me from such posts as “Back From Vacation”, to mention my only other vacation-related post.

Here I am in a characteristically exhausted pose. I’m just back from vacation. It was a lot of fun, but I’m really tired, as you can see.

It was super hot the last few days, and I do mean super hot, but I was at Day Care for four whole days, playing, and, as you may know, they have swimming there, so I didn’t roast or anything.

The guy I live with and his friend went to a place called Portland. They flew. Originally, they were going to drive, so that they could stop at nurseries and stock up on all kinds of cool plants, but that would mean an extra four days, and the guy I live with realized he would go completely crazy thinking of having to drive back home for two straight days, just to be reunited with me. So they flew.

The guy I live with doesn’t have wings, and is not much of a flier. He said the last time he flew was seventeen years ago. A very long time ago.

He also said–predictably, I must say–that he was going to give up gardening and find some other hobby. “Collecting beer bottle caps” was the first thing he said.

Because, I guess, they don’t have brutally cold winters in Portland, and when it rains it doesn’t strike terror into the heart of a gardener like it does one who lives here and who has experienced really bad hail, and that the summertime is sunny, with no thunder. I knew this was the beginning of yet another phase which I would just have to endure.

They went to a place called the Hoyt Arboretum. They were really looking for the Japanese Garden, but it’s in this suburb with huge trees and winding roads, and the guy I live with actually got lost, which he almost never does. On the way to getting lost, though, he drove past the arboretum, which he’d heard of, and so they turned around and stopped there. The guy I live with said that there’s a considerable difference between the way trees grow here and the way they grow in Portland. The trees were really tall and covered with lichen and moss.

Here’s a picture of his friend (she’s really nice and I like her a lot) taking a picture of something we don’t have here at all.

This is called a slug. The guy I live with said they move very slowly, but he watched it cross the gravel. He said it was like waiting for a traffic light to change, here. (In Portland the traffic lights change in a normal way, and that you don’t see your life pass before your eyes as you wait for the light to change.) He also said that I might like to catch something like this and try it, the way I like to do, but that he would object to that.

Anyway, there were trees and things, and lots of what people here call “greenery”.

There were lots of shrubs he said he would like to grow, but that they aren’t hardy here. He told me he knew this for certain, but didn’t feel like explaining how he knew this.

There were a lot of ceanothus in flower, too. We have a couple in the garden here, but they’re not blue-flowered and heavily scented like these were. (This one is Ceanothus thyrsiflorus ‘Skylark’.) 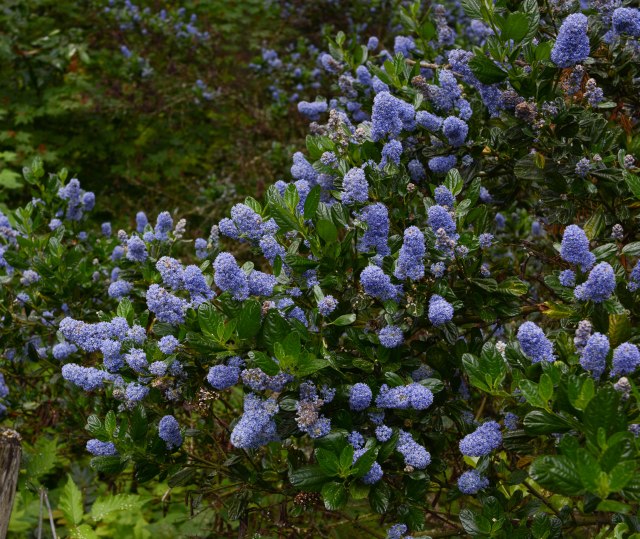 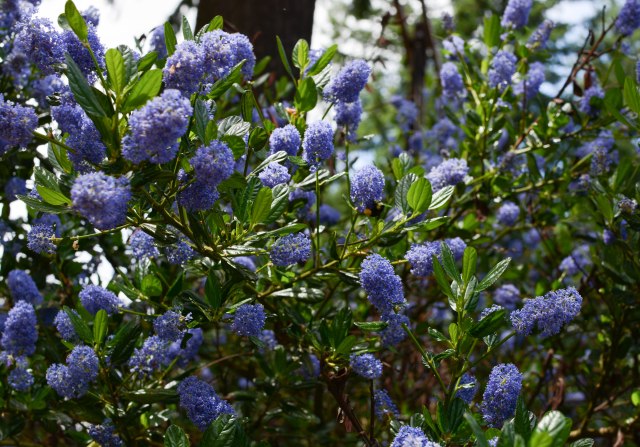 And then there was this frighteningly weird thing, Pseudopanax ferox. The focus isn’t on it, actually, but on the green leaves behind it, but I think you get the idea.

Then the next day they visited a couple of nurseries. But before they went to the nurseries, they visited the Chinese Garden, which is “a lot easier to find than the Japanese Garden because it’s in the middle of downtown”. I guess that makes sense. 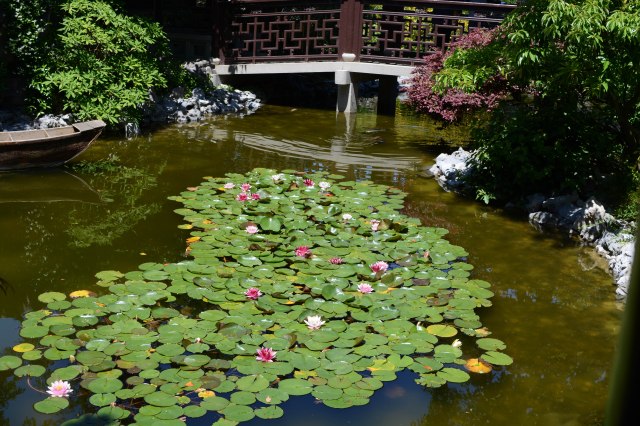 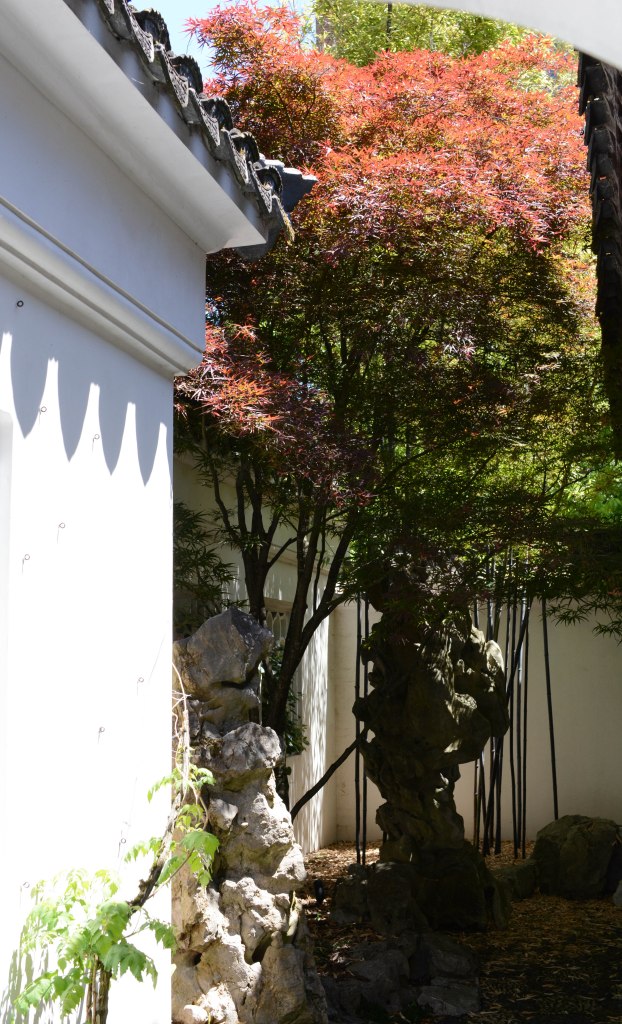 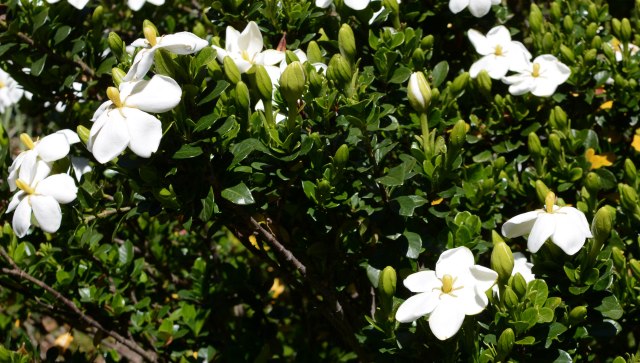 Those are the pictures from Portland, for today.

The guy I live with got home very late last night, and so he couldn’t come and get me until this morning. You may have noticed that in the pictures from Portland there was a lot of sun. This is what our place looked like today. Pretty gloomy, according to you know who. I of course like it, but I do worry about thunder. 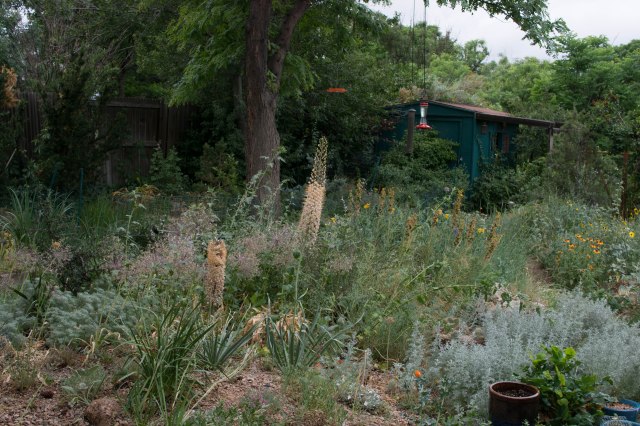 The guy I live with said that maybe later this year, when it starts to get colder, he’ll tell me what it was like flying through a thunderstorm, which he did last night. His friend was a lot calmer about it than he was. I would probably be on his side, with that one.

It hasn’t thundered at all today–yet–and so I guess I’ll let you go, for today, with a picture of me walking out into the garden after a long nap. 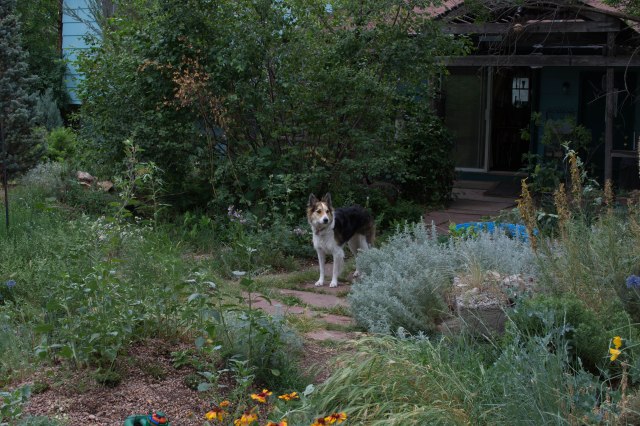 12 Responses to my summer vacation