a jar of ants

Greetings and salutations, everyone; yes, once again it is I, Mani the purebred border collie, filling in for the guy I live with, and here to bring you up to date on all the excitement around here. You may remember me from such posts as “The Upended Breakfast”, among so many, many others.

I look reasonably alert, don’t I? There’s a reason for that, which I’ll get to in a minute.

About the only things, gardening-wise, that have happened lately are the oaks got planted and the “trough patio” was cleaned up a bit.

Besides that bit of activity, there has been other activity.

A couple of nights ago, the guy I live with decided to refill the hummingbird feeders, because that needs to be done pretty much every day, when it’s hot. (It’s been hot, trust me.) So he brought one of the feeders in; the sugar-syrup stuff had black flecks in it. The flecks turned out to be ants. Big black ants. Not as big as the giant ones we had a while ago, but still big. He poured the sugar-syrup into the sink. Most of the ants revived, and began to run around in the sink.

He got out one of the “bug jars”, and started catching ants. When the second ant went into the jar, the first would run out and then run up his arm. And so on. So there was a lot of language, while he tried to catch all the ants.

Eventually he did catch all the ants, and so there was a jar full of ants. Not really full of ants, but with ants.

He let them go, out on the back patio. “You always let ants go”, he said. I knew that. They help spread seed of cyclamen, crocuses, and snowdrops.

Just yesterday, the guy I live with was talking on the phone to a friend. We were both out in the garden. He heard a sound like a sprinkler head gone bad; a sputtering, you know, like shhhh-shhhh-shhhh, with a lot of air being released.

He looked down, and saw a huge reptilian tail disappear under the trough. This trough.

He started yelling at me, really loudly (while he was still on the phone), and yelling louder and louder. Finally he hung up the phone, and made me go inside.

He called Animal Control and said there was a rattlesnake in the garden.

Animal Control said to spray water at it, with the hose. From “a safe distance”. Apparently rattlesnakes don’t like to be hosed off in the summer. So he attached a sprayer head to the hose and shot water at the base of the trough.

Nothing happened. No snake. The guy I live with totally panicked. I mean, obviously, neither of us would ever be able to go outside again.

Then he had a thought. It was kind of odd that he could both panic and have rational thoughts at the same time. He called another friend who has had experience with rattlesnakes and asked what they sounded like.

“Pretty much. And bullsnakes make a noise sort of like that, but not rattling.”

So he went online and watched bullsnake-noise videos. It was a bullsnake. The guy I live with has seen plenty of bullsnakes here (so have I; they’re huge), and he saw the rattle-less tail, but totally freaked out at the noise. He knew they made a noise, but had never heard the noise before. When he heard the noise, it cancelled out everything else in his mind.

So then he had to call everyone back and say “Bullsnake” instead of “We have to move tomorrow”.

He told me he felt like kind of an idiot. I didn’t say anything.

We almost didn’t go on our evening walk because the guy I live with was afraid we’d meet up with the bullsnake and he’d feel like even more of an idiot when it started making the noise he’d never heard before, but we did go on our walk.

And guess what we saw? 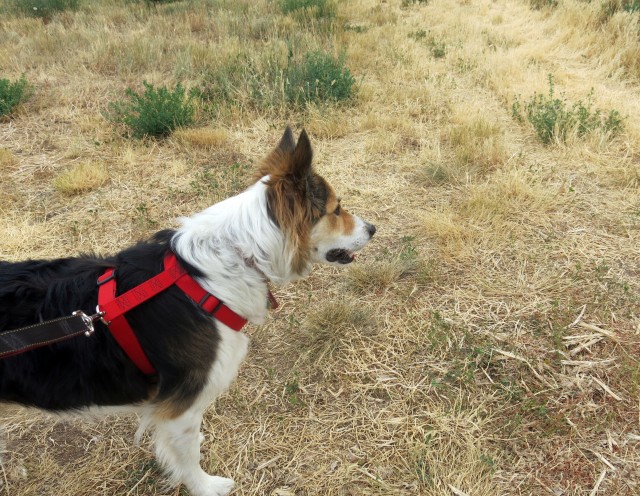 8 Responses to a jar of ants