Greetings and salutations, everyone; yes, once again it is I, Mani the purebred border collie, filling in for the guy I live with, and here to bring you the latest news from our garden. You may remember me from such posts as “Stuff You Didn’t Know”, among so many, many others.

Surveying my domain. The sun was out for quite a bit, today. The guy I live with thought something was seriously wrong.

The awful smell has completely disappeared. It was only present for about three days, and then vanished. The guy I live with said it couldn’t have been something dead, because it wouldn’t stop smelling; it would just smell worse. So if it wasn’t that, it must have been something else. Ghosts, maybe.

Today the guy I live with said he was going to plant the two ‘Big Bazooka’ agastaches, but he couldn’t even get them out of their pots. He had to cut the pots to get the plants out of the pots. He said that way, way back when, trees and shrubs used to come in metal pots and when you bought one at a nursery they had a special tool to slit open the pot, and then of course you had to be careful not to hurt yourself when you handled the pot. This was sort of like that.

When the plant was removed, this is what the root ball looked like.

He had something to say about this. As perhaps you can imagine.

If he planted the plants in the ground, they would almost certainly die. “Time to employ the Super Genius Method”, he said. “At least the roots are growing downward, instead of circling around.”

So the roots were soaked for a while, just to make sure that they were wet. I guess you never can tell, because all those roots seem to make a barrier to getting the whole mass of roots, like the roots inside the root ball, wet like they should be.

Then the root ball was stood on end in the water, for a minute, to make sure there were no air bubbles.

The plan was to tease apart the roots with a root hook, but they were all so tightly bound together, as you can see, that he said he’d probably wreck more roots than he wanted to. 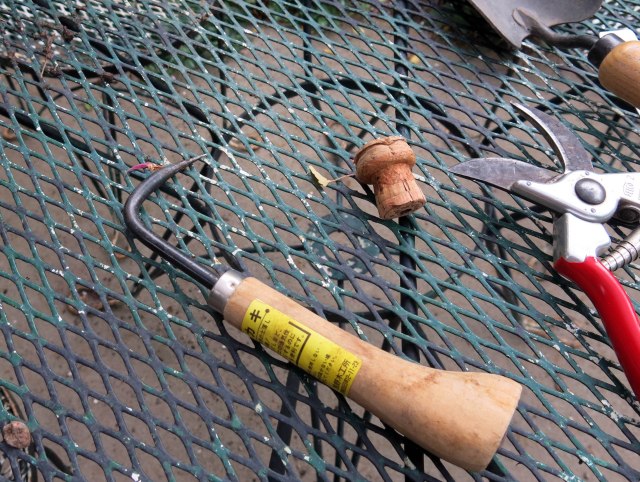 The cork goes on the tip of the root hook. It’s to keep the guy I live with from poking himself when he isn’t hooking roots. I hear that there used to be a collection of corks in a coffee can in the garage, but one by one they were lost, and so another cork had to be put in place of the lost one. So there aren’t very many corks left.

The guy I live with said that in order to get corks, especially decent ones, you have to buy the bottles that come with the corks, and then chill the bottle (for some reason), open the bottle using a special twisting motion of the hand, empty the contents of the bottle, and then you have a high-quality cork to put on the end of your root hook. 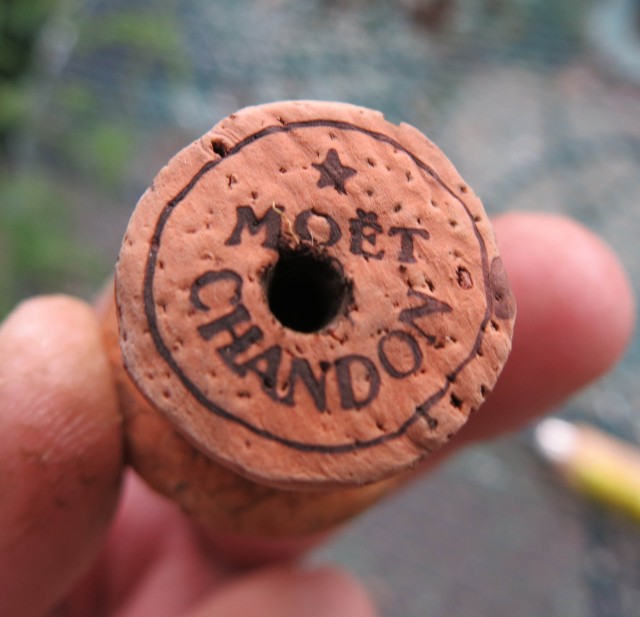 I didn’t know any of that until today.

And then, to get back to it, the plants were re-potted in larger pots. Maybe the roots will start growing into the sand pretty soon.

The perlite floats to the top, so I don’t know why he uses it, but he does. Maybe he likes seeing the perlite, or something.

In other news, the cow-pen daisies (Verbesina encelioides) are starting to flower. The plants are a little wilted because they haven’t gotten enough water, even though it rained a little the other day. The guy I live with says it needs to rain more.

There are a lot of cow-pen daisies on what used to be called the “lawn”. Maybe some should be thinned out. 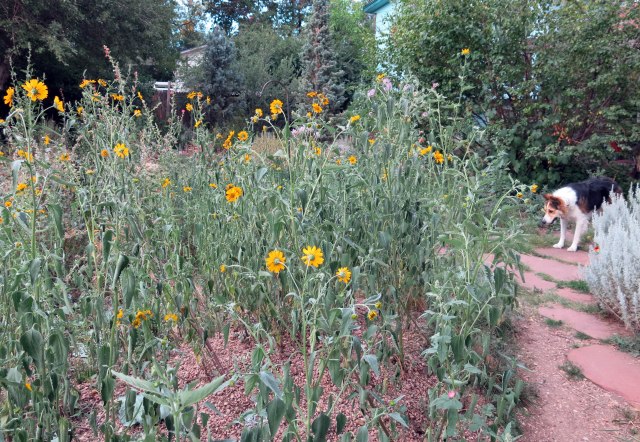 That was pretty much all of the gardening that took place today. A few weeds were pulled, too.

I got to go on my walk. This is me, ready for my walk. I was really ready.

The reason I was so ready is that a couple of evenings ago we walked a different way, because the guy I live with read that we purebred border collies, while we do like tradition and continuity, occasionally enjoy a different experience.

So we walked to the “frontage road”, which is a road awfully close to the highway. The guy I live with said that people drive very fast on the frontage road, going to the apartments, or to the houses across the field. About twice as fast as the speed limit. So we had to be careful crossing the road.

But there were sprinklers on the other side. Maybe you know how much I like sprinklers. (It’s a lot.) There’s a group of offices there and the landscaping includes a whole bunch of bluegrass, like most landscapes do. 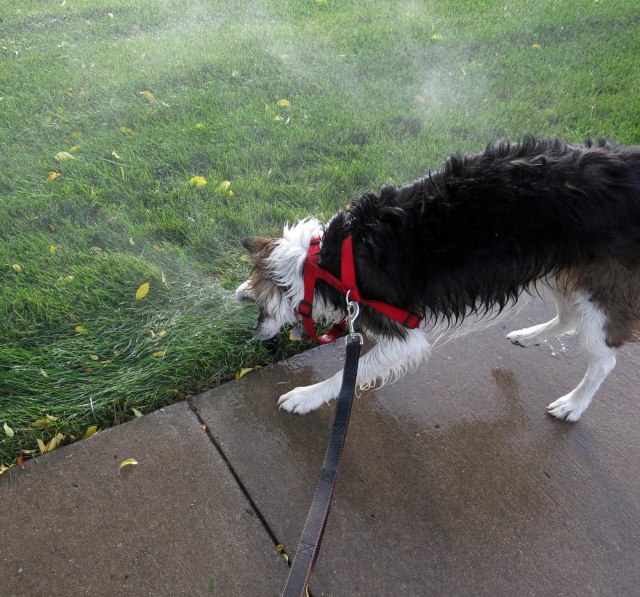 I got soaking wet. It was fun.

The person who knocked on the door then went across the street, and knocked on the door there. No one lives there, now. So he knew this was something he didn’t need to be involved in. Sometimes, there are people at the house across the street, fixing it up. At first, when the last owner left, the house was dark, which the guy I live with didn’t care for, because there had always been lights on at night, but now there’s a light on in the house, and it looks friendlier than it did before.

A couple of people walked down the street today. The guy I live with didn’t talk to anyone, except himself, and of course me. No books were read, no music was listened to (that’s really unusual for here). The television was on, for a while, and a show called “Endeavour” was on. The guy I live with really likes things like that.

Well, that was my day. I guess, really, our day. It was pretty good indeed.

8 Responses to rooting around