Greetings and salutations, everyone; yes, once again it is I, Mani the purebred border collie, filling in for the guy I live with, and here to bring you the latest news from our garden. You may remember me from such posts as “The Project”, among so many, many others.

Just lying on the patio, the way I do a lot. The guy I live with sometimes talks about cleaning the patio rug. It’s a pretty comfortable rug.

When we went on our evening walk, yesterday, the guy I live with set the sprinkler in the middle of the back yard, so the cow-pen daisies could get a little water. I guess you can see that they did. 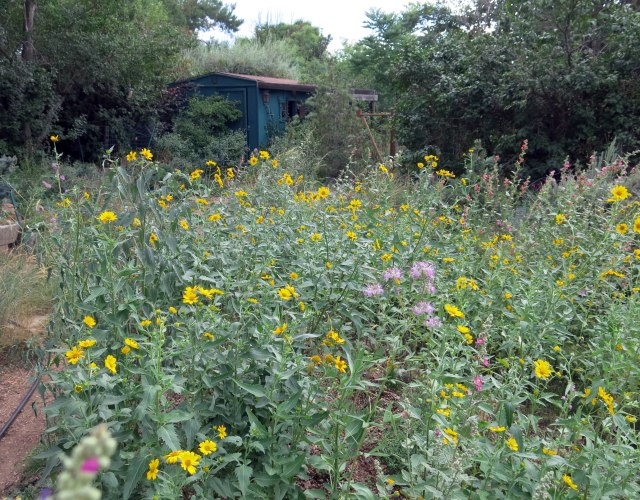 This truly did used to be a lawn. A green one, that was mowed by a regular lawn mower. That was a long time ago.  The guy I live with said that both Slipper and Chess, purebred border collies who lived here before me, enjoyed the green lawn, but he always wanted a buffalo grass lawn instead. Back before “the turn of the century”, which sounds strange to me, there was a ‘609’ buffalo grass lawn, but the grass turned out not to be winter-hardy, and ninety-nine percent of it died in the winter of 1999 or thereabouts. So then the green lawn was installed.

But the green lawn had a problem, because there was one area where it got tinkled on kind of a lot. Chess, whom some of you may remember, liked to do that. So there was this green lawn, with a huge brown area right in the middle. It was turned into what you see in the picture above. In a way, then, all these cow-pen daisies are in a central bed which was started by Chess.

Today was a pretty interesting day. The sun came out for a while. Then it was dark again. For a while we thought it was going to rain. It got really windy.

Then it rained. The guy I live with got all excited, or at least somewhat excited, for a minute, until the rain stopped. “Oh well”, he said, and we went about doing whatever it was we were doing.

Yesterday, a shipment of epimediums arrived in the mail. Some were fairly rare ones. But they were on sale, so, well, you know.

There is even a book all about epimediums.

Epimediums are one of the “in” genera, like snowdrops and hellebores, and gardeners who are interested in them are said to be ultra-sophisticated, which of course is why the guy I live with had to order more. Though I suspect that epimediums are no longer as “in” as they were a decade or so ago, and the guy I live with was just catching up, which is pretty much the way things go around here.

The epimediums came from Edelweiss Perennials and when he removed one from its pot, he said that this was how a root ball (not really a ball but that’s what we say) should look; it looked very excellent.

These plants could be planted right in the ground without anything being done to the roots, though as you can see they were soaked in a dish pan first. (The guy I live with says every gardener should have some dish pans.)

Once they’re established, which can take a couple of years, here, epimediums will tolerate a considerable amount of “dryness at the root”, as Graham Stuart Thomas used to say. There are really very few plants that will grow in the “dry shade” garden writers talk about all the time, but epimediums are one. I mean at least if they get watered about once a week, so not really dry, but sometimes dry. Or at least not moist all the time.

Here I am, watching over the new epimediums. If it looks like I’m lying on a path, that’s because I am. Slipper created this path, a long time ago, because he was always looking for shortcuts. 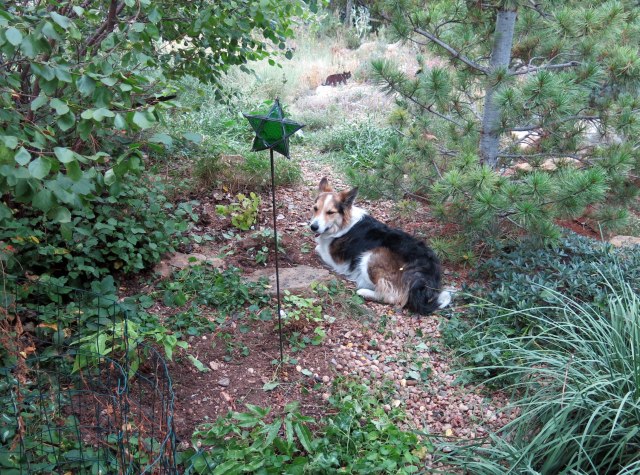 I really like watching the gardening process as closely as possible. I might learn something, so I can help in the garden later on.

The bit of green rabbit wire in the lower left is because of the cyclamen which were planted there a little while ago, and in fact, it’s not to prevent me from stepping on them, but to remind the guy I live with that cyclamen were planted. They’re Cyclamen hederifolium and a couple are flowering now.

Later, there will be leaves, which remain all winter long, and the rabbit wire can be removed.

The guy I live with said he’s ready for cooler weather now, because this summer has been so gloomy and depressing. He said that he always thought August was a melancholy time of the year because, first of all, when he was little, having to go back to school was looming on the horizon, and then when he didn’t have to do that any more, it was the idea that somehow he didn’t do all the “summery” things he should have done, like go to the beach or the swimming pool, or something else he never really did do.  The end of summer was so sad. But now, the weather seems to have changed, and summer is no longer summer but just a season of darkness and endless thunderstorms featuring large hail, to be avoided (hopefully) and endured, not to be enjoyed. I think I agree.

So the cyclamen, flowering, represented the beginning of cooler, and sunnier, weather. I would like that, for sure. We purebred border collies do not care for thunderstorms or hot weather.

Well, I might have gone on more than I needed to. If you think I go on, you should be around the guy I live with, who pretty much never stops talking. He said once that eventually he’ll stop talking, and just make gestures, but I doubt it. 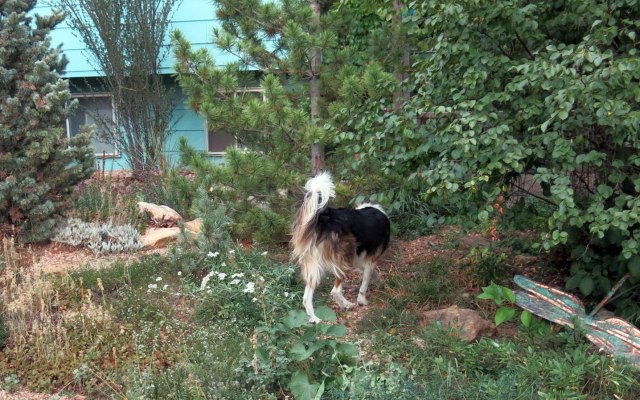