the sun was out

Greetings and salutations, everyone; yes, once again it is I, Mani the purebred border collie, filling in for the guy I live with, and here to bring you the latest news from our garden. You may remember me from such posts as “My New Toy”, among so many, many others.

Obviously, I think the title of today’s post is pretty funny. The sun was out. Get it?

The sun actually did come out today, which surprised the guy I live with a whole lot, since we haven’t had a whole day of sun in so very, very long. He said, “So the first day the sun comes out, it’s going to be eclipsed. Typical.”

The eclipse made these strange patterns on the patio. Also typically, he didn’t have the camera at the right settings. You would think a person with two cameras who takes a lot of pictures would have a clue as to what the right settings are, but, whatever, huh. 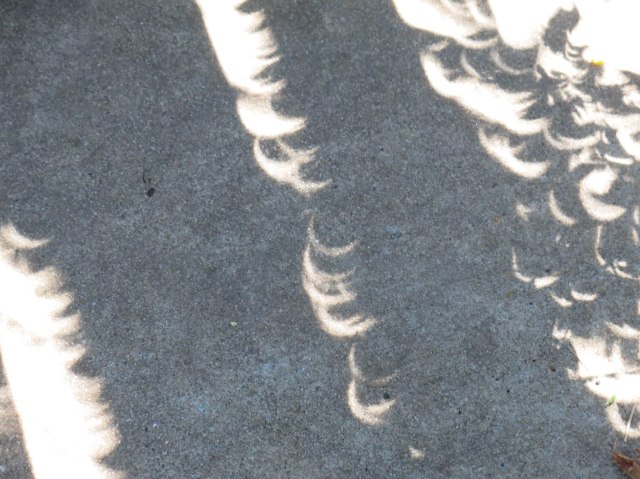 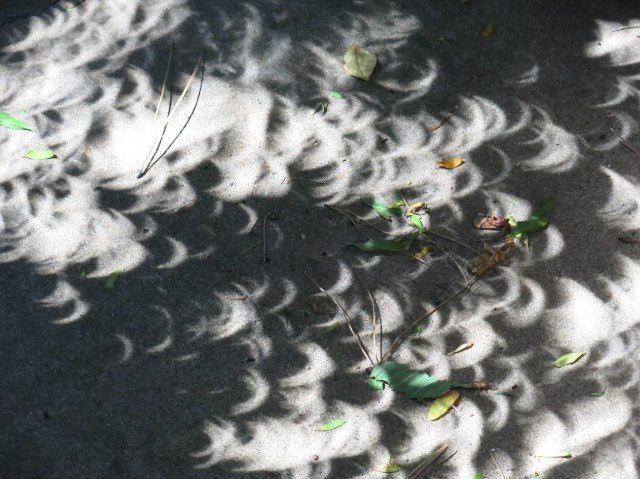 Then it was over. That was the main excitement of the day.

Yesterday there was quite a bit of excitement. One of what I figure was Norm and Celeste’s kids showed up in the field. All the dogs who live along the field were barking like crazy. The guy I live with went out to see what all the commotion was, saw the coyote, ran back into the house to get his camera, ran back to the back fence, and scared the coyote, who was lying down in the grass. He got these pictures anyway. 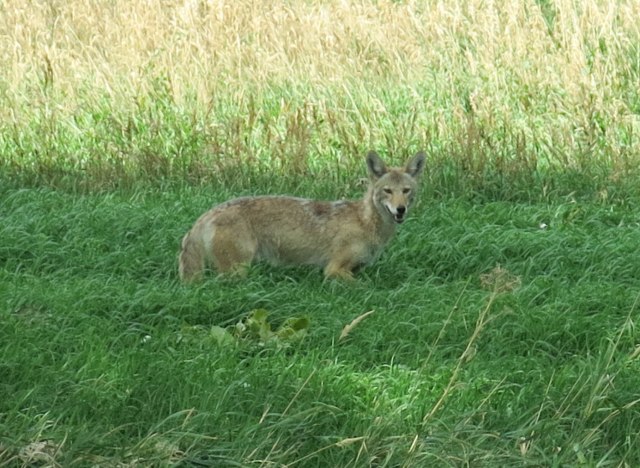 We decided that since it was a youngster it didn’t know that the time for coyotes to stroll down the “green belt” (really just as field filled with smooth brome, which as you can see has turned green again after it was mowed and then rained one that one time) was early morning or dusk. Though the young coyote did seem to know that the path, the same path we walk on sometimes, was a coyote path.

Back to today, after the eclipse business, the guy I live with spent a long time making these things called steamed buns (Chinese steamed buns), though I guess that really at the end of the process is when they could be called “steamed”. Eleven buns were made. I didn’t get any, as usual.

No gardening took place today. The guy I live with said that the combination of an eclipse and making steamed buns was way too exhausting.

I do have a picture of the cow-pen daisies, though. This is their time of year, so they get their picture taken a lot.

You can see some bee plants there, too.

The real reason for all the daisies and bee plants being there is that the guy I live with couldn’t figure out what else to plant there, though some things have been planted since then, and the lavenders are going there, too.

I still got to go on my evening walk, even with all the steamed buns being made.

The sprinklers were on across the street, but the guy I live with said not along the sidewalk, but farther back in the office park, and that we should stay on the sidewalk, so we didn’t go over there. 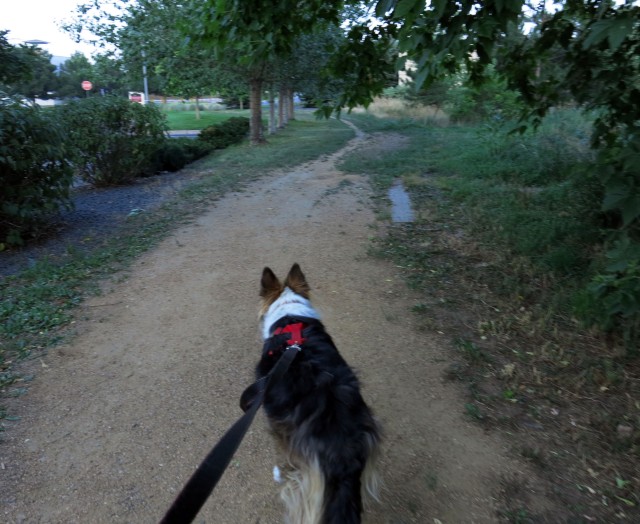 The hops are looking pretty good right now. I guess I don’t need to say that they make good companion plants for rabbitbrush again, do I?

That picture could have been more in focus, I think.

This is part of the canal road where I don’t often go.  The canal is on the left. The levee, I guess you would call it, was made with pieces of concrete about the size of a tennis ball, in this section, and so it’s not much fun to walk on. There are kind of a lot of alfalfa plants in the way, too. That yellow bit is a piece of poplar branch that fell from a tree on the other side of the canal. 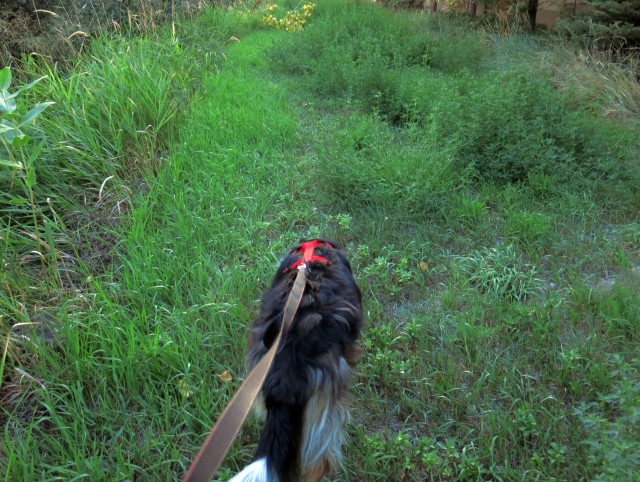 The goldenrod is looking pretty good right now. We stopped to admire it. Being a purebred border collie, I can see yellow. The goldenrods were pretty yellow. That’s Amorpha fruticosa on the right. 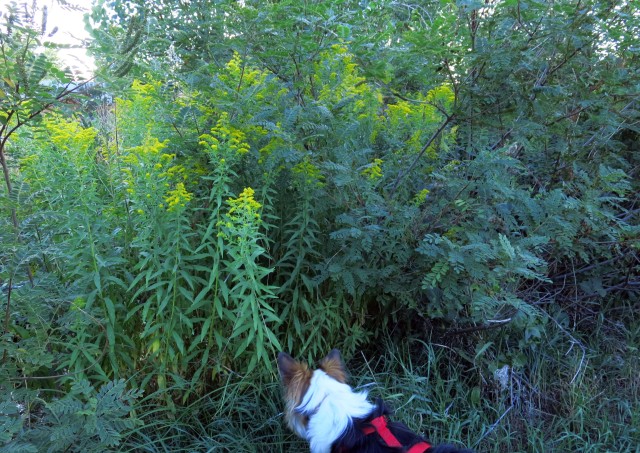 The guy I live with said that when he was a kid, he used to get something called “eggs à la goldenrod” all the time, because he and his dad both liked it a lot. When the guy I live with heard that there was a plant called “goldenrod” he thought that was part of the recipe, but then, he was little at the time.

There are several plants growing along the canal which you don’t see in places where there isn’t constantly running water. The guy I live with thinks that seeds floated down the canal from the mountains; the water from the canal comes from Turkey Creek. Or maybe it comes from Bear Creek. Or both. I think both creeks flow into a lake, really a reservoir, to the northwest of us.

Anyway, that’s what I have for today’s post. The guy I live with said it would be completely excellent to make a post with a title like today’s, on an eclipse day. We won’t have too many opportunities to be so riotously humorous in the future. I’m not sure that’s true; we’ll see.

10 Responses to the sun was out