Posted on September 2, 2017 by paridevita

Greetings and salutations, everyone; yes, once again it is I, Mani the purebred border collie, filling in for the guy I live with, and here to bring you up to date on the news from our house and garden. You may remember me from such posts as “The Fast Learner”, among so many, many others.

Here I am in a characteristic pose. Not hugely in focus, I know, but the cabinet containing the biscuits is over my left shoulder, so that’s why I look the way I do.

Things here lately have been, oh, how shall I describe them? Let’s say ultra-weird.

You may recall that a few weeks ago we were plagued and mystified by an awful smell, the source of which neither of us could locate, and then it suddenly went away, well, now there are two large mysterious stains on the living room carpet.

The guy I live with noticed them about ten days ago, when they were not very large, but they were there. Some people mentioned me in relation to the stains, which was unkind, of course, because I don’t do things like that, and besides, without going into any detail, the guy I live with is more than familiar with such things. The stains have no smell. What they may be is that some burned incense fell on the floor and was mixed with water, and is sort of dyeing the carpet.

He’s been shampooing, spraying, soaking, blotting, yelling, cursing, every day since then. Every time he does something the stains get larger. They’ve gotten down to the base of the carpet and when the carpet is soaked, the carpet apparently wicks the stain to the surface again. Lately he’s been using the wet/dry vacuum cleaner to suck up the water (it makes a horrific noise), hoping that eventually, the stuff at the bottom of the carpet will be completely vacuumed up.

This was what the front door one looked like this morning.

After it was shampooed, scrubbed, and vacuumed.

A few hours of drying later. 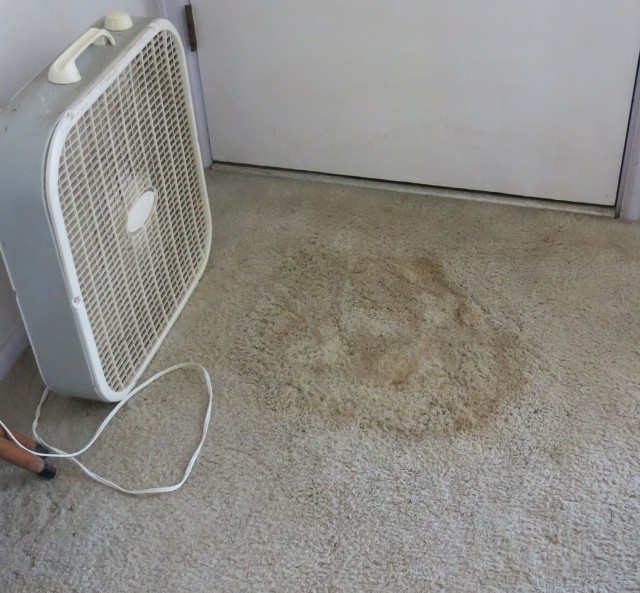 The guy I live with said he just might go crazy.

Then there’s me. The guy I live with said I had a lot of mats on my hindquarters and they had to be “dealt with”, otherwise people will think I’m not well-cared-for.

Not only do I have to have the mats cut out, one by one, I have to be brushed, which I don’t care for a lot. The guy I live with says what people usually say at this time of year, that he’s brushed so much hair off me he could make another dog. It’s a really dumb thing to say, but he still said it.

He’s been having a lot of trouble with his eyes, all sticky and burning and blurry, which makes looking at the computer difficult. These eye allergies. The air is filled with smoke from wildfires, too. You can see it in this picture, looking east, taken on my evening walk.

A funny thing happened on our walk, I think this morning. The guy I live with was talking about going to the store, like he does sometimes, and he suddenly realized that “the grocery store” was a place where groceries are stored. He always associated the word “store” with “shop”, because when you go to the store, you shop.

But not for long.

I forgot to mention (maybe you can see how my mind works here) that about a week ago we found a drone in the “way back”. When he told people about it, the guy I live with really wanted to say it had government markings and a spy camera, but of course it was just a toy drone. It was hung on the back fence in case whoever lost it walked by, in the field, but it’s still there.

People said he should try to get it flying again, but I guess you don’t just wave a magic wand and make it fly, and besides, a drone isn’t “a valuable addition to our modern lifestyle”.

Anyway …it’s been extremely dry here. The guy I live with watered almost the whole garden last week (not the front yard, which never gets watered), because the plants were looking distressed. They look better now. (The pole, which used to hold a solar lamp, does need to be straightened; I’ll mention that to you know who, tomorrow.)

Some asters, Aster oblongifolius, are flowering now. They’ve also seeded all over the place, which is not a bad thing.

The plants which were re-potted using the “super genius” method are doing really well. Some plants were planted earlier, then dug up and re-potted, because they were wilting every single day. The guy I live with says to say that this method is working, too; roots are growing out of the tightly bound root balls. 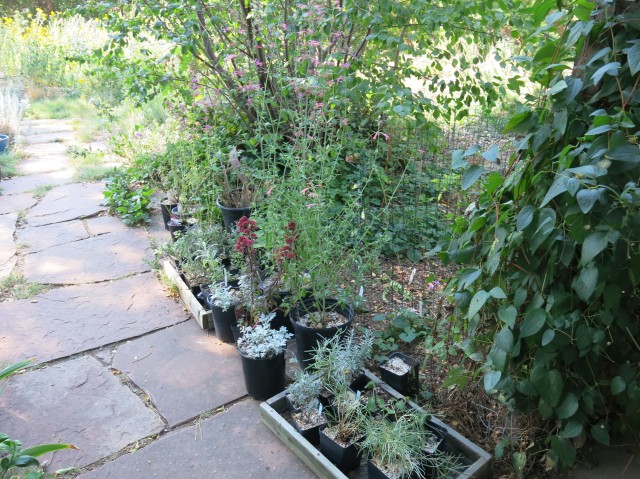 Right in the middle there you can maybe see two ‘Big Bazooka’ agastaches. The guy I live with was emailing a friend about how he thought the hummingbirds had left, and as soon as he sent the email he looked outside and there was a black-chinned hummingbird visiting the Big Bazookas. He got his camera but the hummingbird flew away. Naturally.

These are selections of Agastache cana, which has foliage that, according to the guy I live with, smells like old-fashioned bubble gum. He’s so old that he remembers Bazooka bubble gum, with the Bazooka Joe comic inside. Some people call A. cana “Dubble Bubble mint”, which is a different bubble gum, originally made by Fleer, which he also remembers. I guess both brands are still made. The guy I live with used to chew gum when he was a kid. And blow bubbles, sometimes. I don’t chew gum, so none of this makes any sense at all to me.

There are some other selections of Agastache cana there, too; ones called ‘Sonoran Sunset’, which the guy I live with says is a funny name, “even fanciful”, since the plant is native to western Texas, which is nowhere near the Sonoran Desert. (The type locality of A. cana, if you wanted to know, is Hueco Tanks, near El Paso; Chihuahuan Desert.)

The plants are being watered every day. They like that. Even when planted in the garden they need a lot more water than some people say they do; they get lots of rain from the monsoon in their native habitat. They’re usually grown here with drip irrigation or lots of watering. Neither of those things is going to happen here, of course. In fact these have been grown here before, and died of drought.

So, with the carpet stains, and the eye allergies (including a lot of complaining about people burning wood at this time of year), and being ruthlessly brushed, I’ve had to put up with a lot, lately. I spend most of my time lying on the patio. There’s plenty to look at, and guard, if necessary. 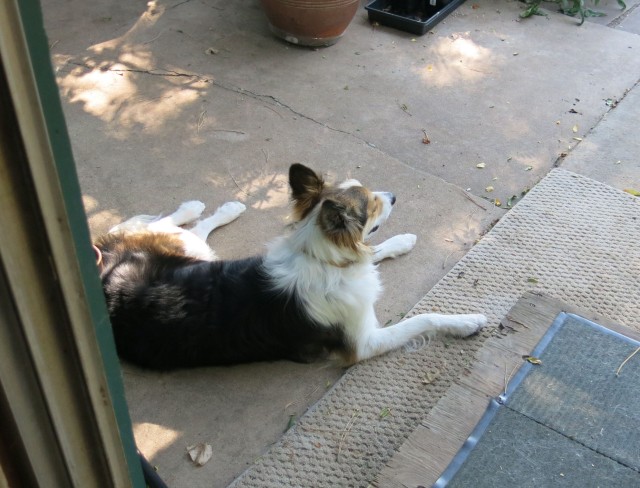 I know this has been another rambling post. We purebred border collies are easily distracted, because we’re so intense, you know.

I’ll leave you with a picture of the smoky sunset we had tonight, and then another picture of me. Without going on about how the guy I live with constantly goes on about the correct spelling of the word “smoky”. Or anything else, really.

This is the sunset:

This is me (if you didn’t know). By the way, I suppose I’ve said this before, the bell was put up for purebred border collies who lived here before me so that they could ring the bell if they wanted to go out. They really did that. But the back door has been left open (except at night) for the last eight years, so I don’t have to ring the bell when I want to go out. I just go. 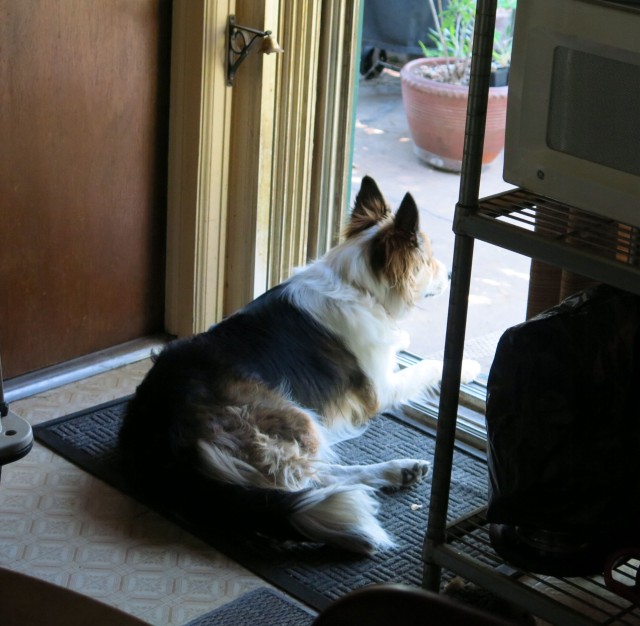