Greetings and salutations, everyone; yes, once again it is I, Mani the purebred border collie, filling in for the guy I live with, and here to bring you the latest news from our garden. You may remember me from such posts as “Nothing Again Nothing”, among so many, many others.

The guy I live with was planting some lavenders in the North Border, which is what this is. If it looks sort of empty, that’s because, so someone says, a certain puppy (not sure who that might be) wiped out most of the plants here when he first showed up at the house and discovered squirrels. Squirrels are interesting and need to be chased, if you didn’t know.

This is an extremely hot and dry part of the yard, with awful soil, and so we’re not sure why the aster ‘Andenken an Alma Pötschke’ (to be super precise about the name) looks so good. But it does. Usually asters like this get all wilty when it’s too dry for them.

Here’s a picture, similar to the hundred others just like it that have been posted here, of the view to the west, looking down the path. You can see the aster, flowering away. In the lower right are the leaves of the ‘Grace’ smokebush he planted there some years ago. It’s had a rough life, but maybe the roots have finally left the root ball and grown into the surrounding soil.

It’s been incredibly dry here in the last few weeks, but even so, the guy I live with decided to plant all the lavenders, and then water them a lot. I understand there’s been quite a bit of watering going on while I’ve been at Day Care, playing with my friends.

You can see that the roots of the lavenders did leave the root balls, using the “super genius” method.

It’s been so dry here that the guy I live with said he wouldn’t mind if it snowed. I know, right? Ordinarily he would never say something like that, but that’s how dry it’s been. And extremely dark, with clouds almost all the time. It isn’t going to snow, because even though in the past it snowed in September pretty often, things seem to have changed. It might not snow, or rain, for that matter, until some time in December. Rain would be nice, though.

Speaking of roots …. You may have noticed that I’ve been gone for rather a long time. Longer than usual. It wasn’t because of the carpet stains; I mean, the guy I live with didn’t have to be taken away to a home because of the stains. He bought a couple of commercial carpet cleaning sprays and tried one. It worked pretty well, so that only a little work is left to do, but it had such an awful smell to it that it almost drove the guy I live with right up the wall. The guy I live with detests almost all chemical fragrances and this one, I guess, was really icky.

No, it wasn’t that. The sewer drain got clogged up. The guy I live with called a plumber, but had to wait a whole day, which was okay, really, because he’s always liked this company, but he almost went completely crazy worrying about it. The sewer line was snaked and it was tree roots blocking the line. There aren’t any trees, like big shade trees, in the front yard, so the guy I live with suspected that it was the tree across the street which was the culprit. Or a tree growing somewhere else. That can happen, I guess.

And then, remember all the smoke in the air? The air cleared up, so some of his neighbors decided it would be a good time to …..burn wood. It’s legal to burn wood, like in a fire pit, but then the smoke comes into our house, because of the fans cooling off the house, and the guy I live with gets annoyed. (That’s about the biggest understatement I can make.)

I fear, because of that, he might be turning into a cranky senior citizen. He does have a cane, which was his dad’s, and which he refers to as an “ashplant” (like in Joyce, you know), which he could go around shaking at people, yelling that his right to cool off his house outweighs the right to burn wood (it does, by the way) and stuff like that, but instead we just stay up, and hope the smoke has cleared by the time we go to bed. I of course go to bed much earlier, but I participate in the bedtime ritual by being awakened, going outside, and then coming back in, for bed. I get all tucked in, in my Upstairs Fort, with my Lamb Chop. It’s really cozy there.

I tore up my Lamb Chop toy the other evening (I couldn’t help myself), and so I got a brand new one that evening. I hope there’s an endless supply of Lamb Chops….

Sometimes, with all the darkness and no rain, the guy I live with gets into a brown study. Probably most people do. I know I do, sometimes. (Not very often.) If you’ve read Sherlock Holmes, you know about brown studies. This is the book he reads, when that happens. I don’t think pictures of this have been posted before.

He says, and I guess I have to take his word for it, that in some ways this is one of the most remarkable books written by this author. It’s about trees, in the landscape (as I guess you can tell), but not about “the landscape” as we Americans would think of it, but rather how to create a pleasant picture, or view, in a planted landscape, which I guess most of them in Britain are.

The photographs are utterly delightful. (The guy I live with says the printing by Jonathan Cape has the most color photographs.) This is the kind of book where you sort of skim over it, then re-read parts, then other parts, and stare at the photographs, and the compare the before and after pictures, over and over.

This was an ex-library book that he bought online. It had a special owner, previously. A very special owner indeed.

Well, I guess that’s all. To recap, the guy I live with has been reading, very slowly, doing some gardening, thinking about plumbing, wood smoke, and trees in a planted landscape like we don’t have here. And it would be nice if we had some rain. Mist and drizzle would be really nice, but those things hardly ever happen here. They used to, I’m told, but not any more.

I’ll leave you with another horticulturally-oriented picture of me. 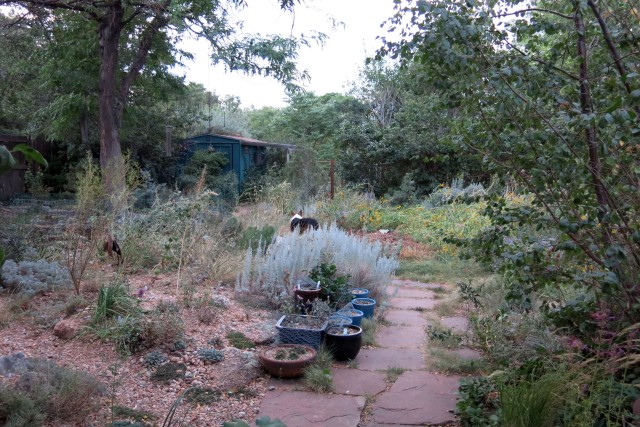 18 Responses to next to nothing