Greetings and salutations, everyone; yes, once again it is I, Mani the purebred border collie, filling in for the guy I live with, and here to bring you the latest news from our garden and its environs. You may remember me from such posts as “Horticultural Invective”, among so many, many others.

Here I am in a characteristic pose, with my friend Lamb Chop. 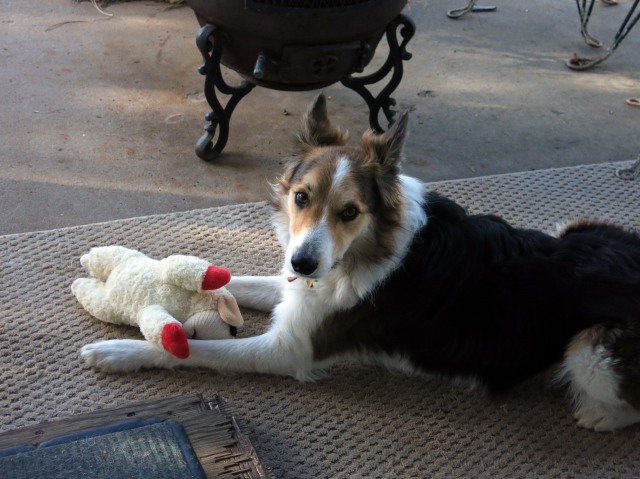 The guy I live with said that the weather forecast tonight was for a “wintry mix”, which I didn’t understand, because all the precipitation in winter here comes as snow. He said at this time of year sometimes people think it might rain here, like it does elsewhere, and the forecast was probably due to an excess of nostalgia from people who moved here recently from rainy-winter climates.

It doesn’t rain here in the winter. Ever. When people walk up to the front door this is what they see (if they’re looking). Not plants you’d see much of in a garden where it got cold and rained too, maybe. 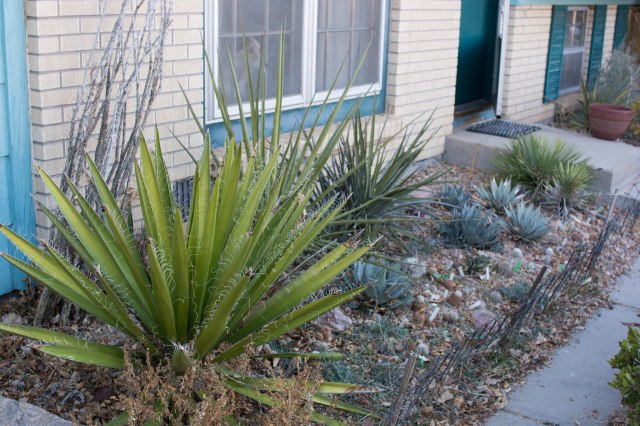 You can see me in that picture, and also the ocotillo which is leaning a bit too much. It needs to be propped upright again. It’s been dead for years.

It was even sunny and nice yesterday. 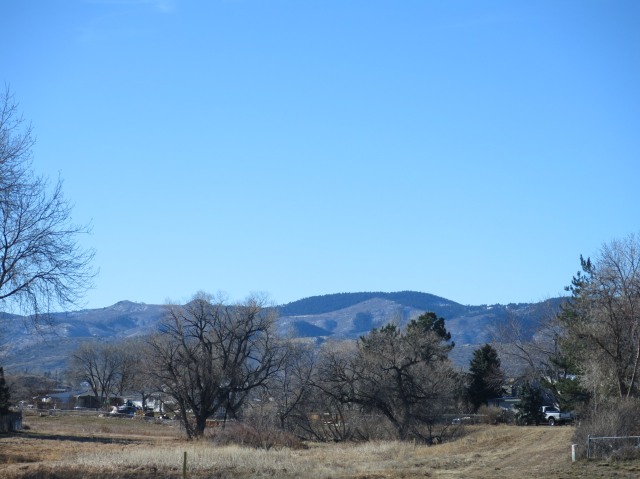 The guy I live with does admit that the junk in peoples’ back yard and the pickup spoil the pastoral scene here.

Then last night we had a sunset that the guy I live with said reminded him of the movie “Independence Day”. I’ve never seen it so I have no opinion. 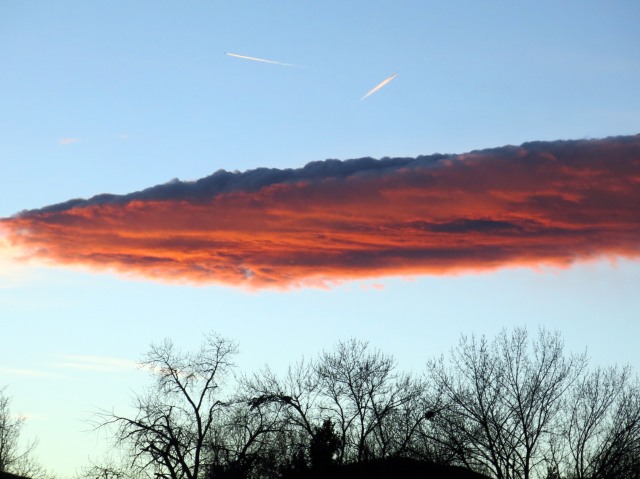 People are always telling him to watch this or that movie or read this or that book, and he never does. He read books when he was younger.

This always upsets people. If they like something, they get upset when he doesn’t, or, to be more precise, when he’s indifferent. You should hear people talk when the guy I live with says he couldn’t name a single member of the local football team. 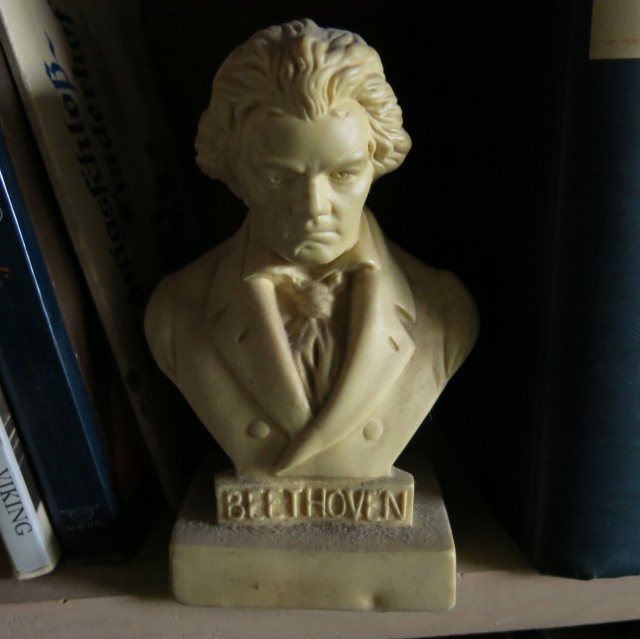 The guy I live with says Beethoven really looked like this next picture. I’m tempted to say a “characteristic pose”. A life mask was made. They put straws up his nose so he could breathe, and Beethoven ruined the first attempt because he thought he was going to suffocate. He had smallpox when he was younger, and his contemporaries said he was not handsome, but people who knew about music were more than well aware of his stature, even then. Of one piano trio, newly introduced, E.T.A. Hoffmann called it “a thing of beauty from an unknown world”. 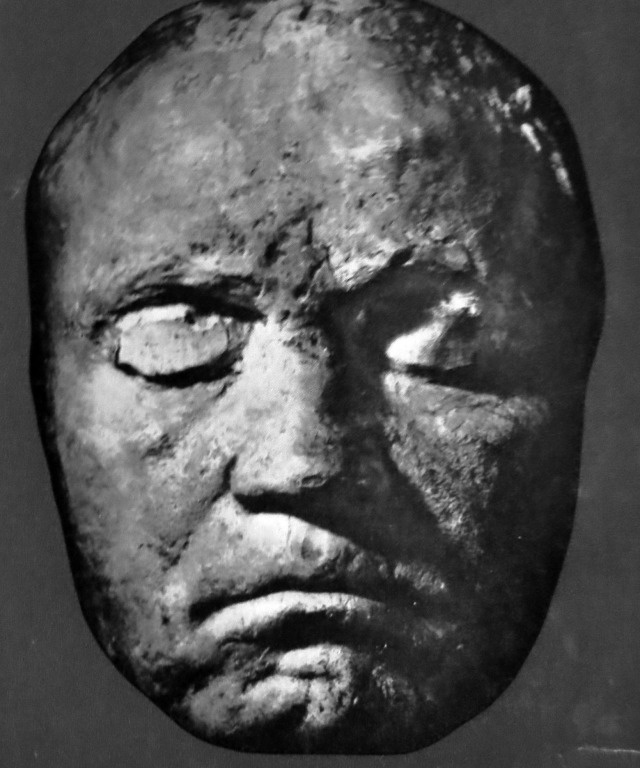 Stravinsky said that when Beethoven was buried, “the mortal part was lowered into the earth, taking with it the largest share anyone ever had of the power of musical creation.”

The guy I live with has loved classical music since he was eight, and has met very few people in his life who felt the same way. That has never bothered him. Which makes the reactions of people who get upset when he doesn’t go crazy over something else even more peculiar. And so he says never to be disappointed if someone else doesn’t appreciate things you like, because the opposite is true, too. Like the guy I live with doesn’t care for chewing on pine cones, but I do.

It didn’t freeze here last night. The guy I live with said it wouldn’t, on Beethoven’s birthday.

It was a lot less sunny today, I guess in preparation for the “wintry mix” business. See what’s in the tree? We walked up to get a picture. 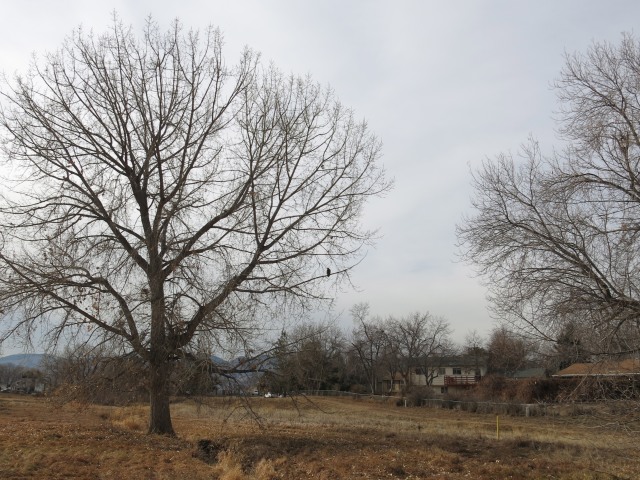 A big red-tailed hawk, but it flew away. 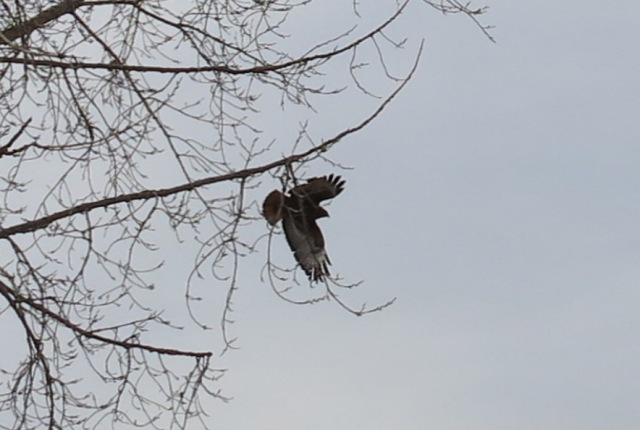 I was only able to do one shadow impression on my morning walk; I say this is an anteater. 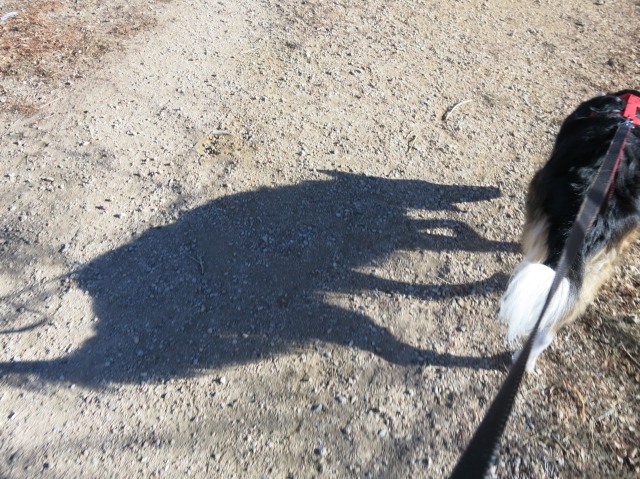 Later, the guy I live with got some bread (Alvarado Street Bakery, California style, if you wanted to know) out of the freezer, which I thought meant he was going to make toast, so I had to leave. 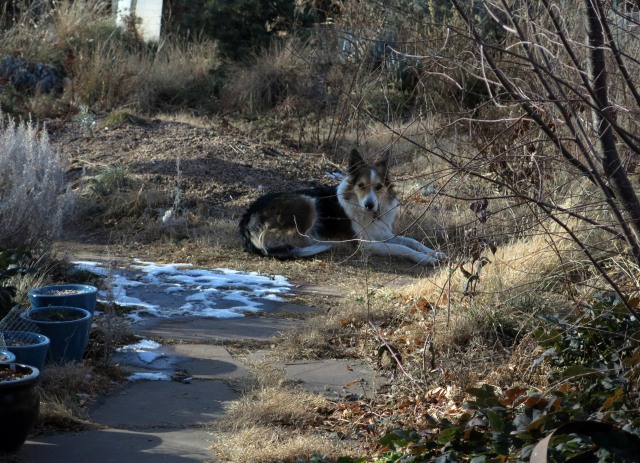 He made sandwiches instead. Imagine my relief. I came inside after that.

This is the time of year when he goes through old seed packets and thinks about them.  Sometimes he does something. These will be soaked in water. 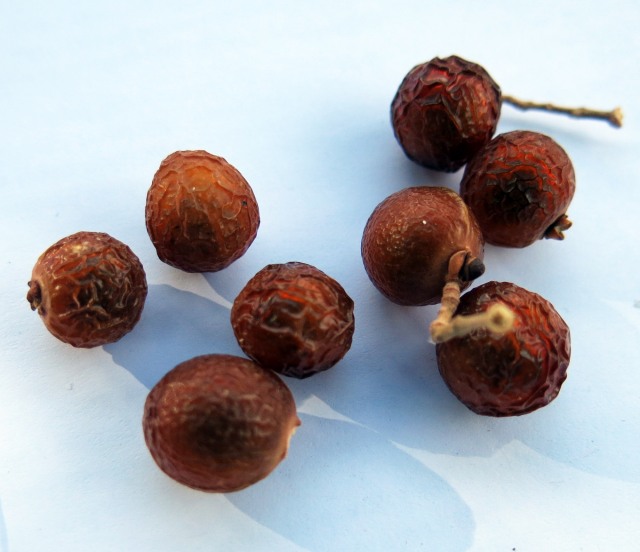 These are Sapindus drummondii, the western soapberry. He tried to germinate these once before and nothing happened. There’s a tree at Denver Botanic Gardens that makes him jealous. He said the fruit, which is a drupe, is translucent in the sun. The seed will be soaked so the outer shell can be peeled, and then the seed will be stratified in the refrigerator. Maybe something will happen.

While he was doing that, I spent some time looking at the ground. 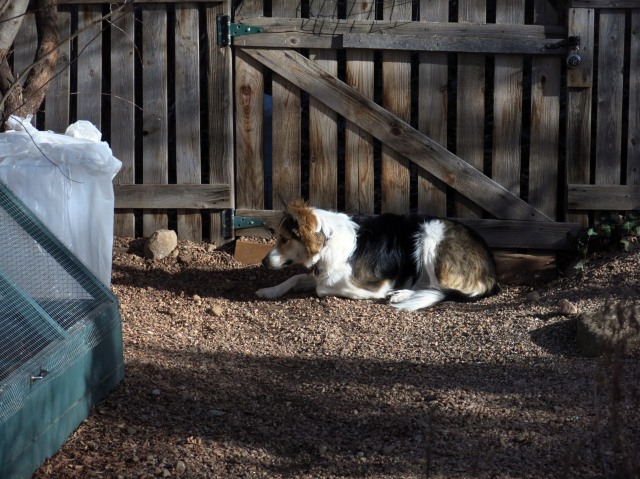 Finally the guy I live with went over to see what I was looking at. Of course, having inferior vision, he looked and looked, but eventually saw the yellow-jacket in the pea gravel. It wasn’t in very good shape so he picked it up with two twigs and put it on the other side of the fence.

Then there was the usual to-do about various things. The faucet was dripping. The guy I live with dreaded working on it, because last time there was a great deal of difficulty, unlike the first time which was easy. He ordered the replacement cartridges and they sat on the sink for a week. The faucet is a commercial Moen and was not cheap, and so the guy I live with put off “the inevitable struggle” until suddenly this evening he decided to do it.

It took three minutes to do.

The guy I live with said there was an unwritten rule that if you think something will take hours (if not days), it usually takes just a few minutes. But the opposite is true, too. He said there were many times, when he worked outside, that he thought a job would take half an hour and turned out needed two days to complete.

The paperwhites haven’t flowered yet but almost have. ‘Ziva’, which was purchased last, is ahead of the others. 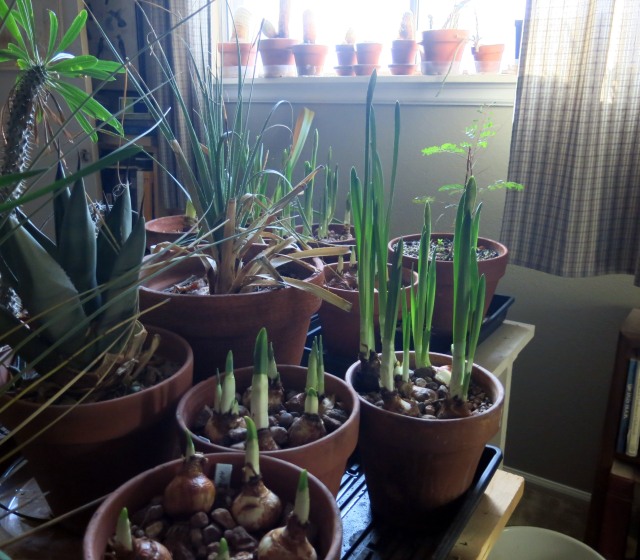 The Zivas are growing in homemade potting soil, and so get more water than the ones growing in just gravel (because the pots have drainage holes in the bottom). He said there is stuff online that talks about adding alcohol (vodka, gin, etc.) to the paperwhite water in order to prevent the roots from taking up too much water, thus keeping the plants shorter, but he said we’re not going to do that.

I heard that purebred border collies liked alcohol; there was a story of a glass of red wine sitting on the kitchen table and then a lot of lapping noises and Slipper had drunk the whole glass of wine. And both Slipper and Chess liked things like stout and porter after the scary fizzing had died away. But I guess we’re really not supposed to be drinking alcohol.

Back to the paperwhites, which are Narcissus papyraceus, the guy I live with said that the genus Narcissus has about seventy-five species (maybe a zillion according to some botanists)  and that probably half of them flower in winter in their native habitats (around the Mediterranean Sea), so paperwhites aren’t the only ones that do this.

The regular daffodil, probably originating from Narcissus pseudonarcissus (what a funny name) is a spring-flowering one, of course, but there are some which are reasonably hardy which sort of flower in the winter here. I say “sort of” because the leaves are hardy and the flowers usually aren’t.

Outside, very little is happening. Here’s Crocus niveus thinking that this time of year might be ideal for flowering. It really isn’t. 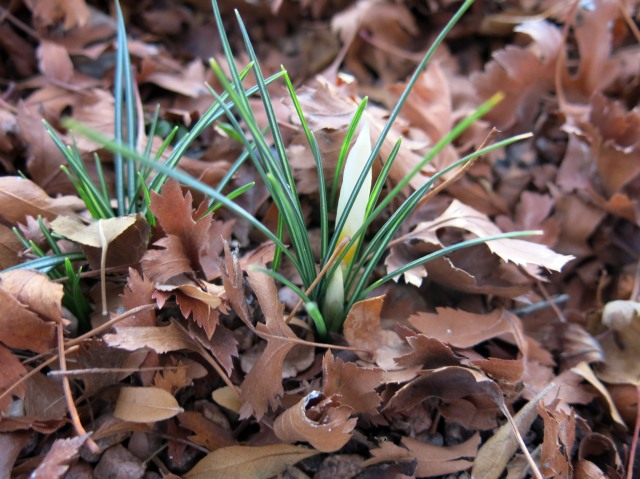 Snowdrops don’t mind the cold but the guy I live with has decided that the early-flowering ones need more sun. This is ‘Daphne’s Scissors’, in the Snowdrop Frame. 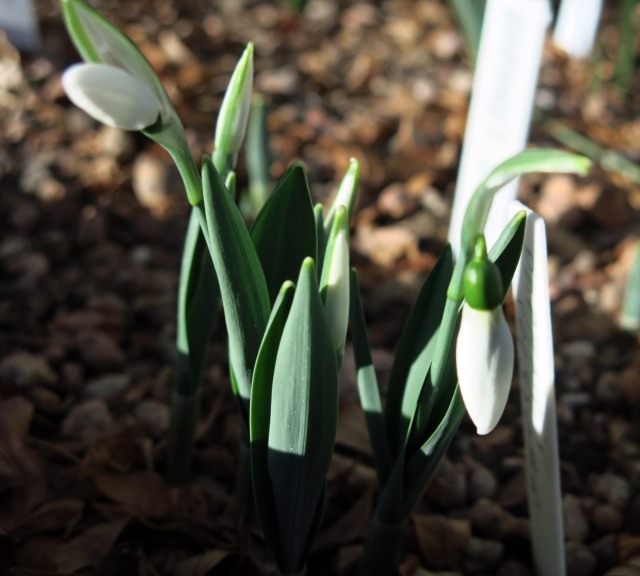 There are other snowdrops sort of flowering out in the garden, and the guy I live with said that next spring they’ll all be moved to places where they’re in sun at this time of year. They don’t seem to like all the shade they get.

I guess that’s pretty much all for today. I’ll sign off which yet another picture of me on my walk, going by all the green bluegrass in the field. 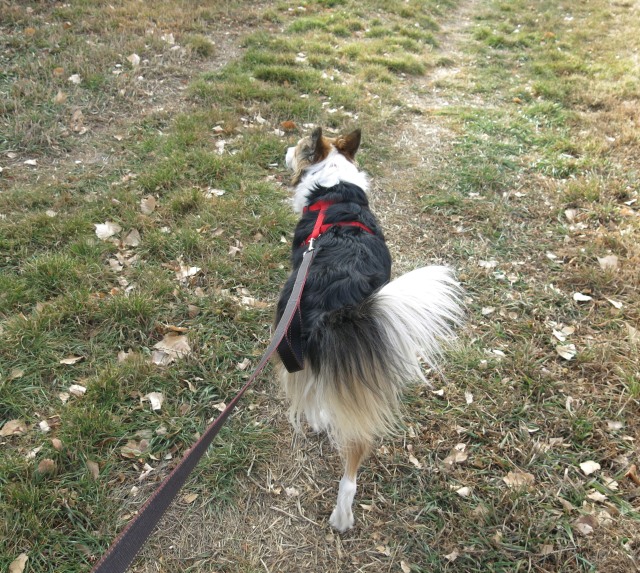 21 Responses to a wintry mix