up in the air

Greetings and salutations, everyone; yes, once again it is I, Mani the excellent purebred border collie, filling in for the guy I live with, and here to bring you the latest news from our garden. You may remember me from such posts as “Most Improved”, among so many, many others.

Here I am in a characteristic pose. Waiting for the guy I live with to come outside with me, as usual.

I really like gardening and have a very enjoyable time when he’s out in the garden, too, but sometimes it does involve an awful lot of waiting. Eventually he did come outside, as you’ll see in a bit.

There was a pretty nice sunset last night; the first sunset of the new year. It was not warm on our evening walk, though. 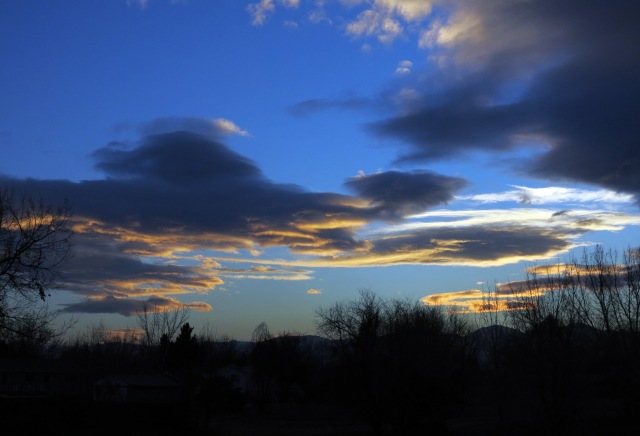 Today the guy I live with went to the store. I never get to go. He says I would be bored, but considering the things he brings back–about half of them for me–I can’t see how that could be possible. Maybe he’ll take me next time.

Before he left, he stopped and talked to his neighbor, who also lost his wife, to see how he did over the holidays. It was about as expected.

After all the groceries were put away and I got to try one of my new biscuits, the guy I live with went about stratifying a bunch of the seeds he got. These were all species of calochortus, if you needed to know.

I suppose this has been talked about before but the guy I live with said this would pad the post a little bit, so here you go. These are all the things necessary for this procedure. The spoon is a special spoon which his late wife bought just for “seed stuff”. 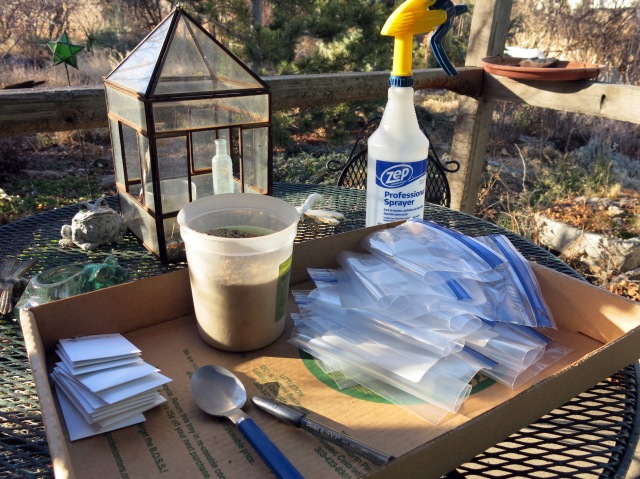 The purpose of stratification, as I learned today, is to keep the seeds moist and at about forty degrees Fahrenheit for a month, or two months, in order to break down the germination inhibitors.

Sand was put in freezer bags. The “medium” doesn’t have to be sand, but the guy I live with has used all sorts of other things, like perlite and vermiculite, and likes sand the best. This is just “play sand” like you get at a box store.

The seeds are sprinkled in.

More sand is added, and then water is sprayed in to get the sand damp. If there’s too much water, like some of the seeds are floating, more sand can be added.

Then the freezer bags go into this box, and the box goes into the crisper drawer of the refrigerator (not the freezer). The towels are to help keep the seeds from freezing.

That’s all there is to it. The seeds will be checked in a month or so to see what’s happening (okay, seriously, they’ll be checked about every two days, but they don’t need to be).

After a month or two the seeds will be sown in pots under lights and the seeds will germinate. Hopefully. The guy I live with said that sometimes you can see action while the seeds are still in the bags. The embryos start to swell and move toward the tip of the seed (the micropyle).

(You can also sow the seeds–dry–directly into the garden in about November; that works, sometimes, if no one eats the seeds over the winter.)

Later on, the guy I live with said we would show a method for sowing paintbrush (Castilleja sp.) which works pretty well, but conditions have to be right. (There has to be some snow in the forecast.)

The seeds weren’t the big deal of the day, however. That happened a little earlier. We went outside and there was a big hawk in the cottonwood, and two others flying overhead. One of the ones overhead dived down at the hawk in the tree and I guess chased it away, and then the two hawks kept circling overhead. The guy I live with reassured me that the hawks weren’t going to go for me. (The jingling you hear is me.)

Then on our evening walk we saw one of the hawks. (Our back yard runs practically the length of the fence between the two trees there.)

Well, that’s it for today. I hope you enjoyed what turned out to be a rather informative, if somewhat flighty, post.

14 Responses to up in the air