Greetings and salutations, everyone; yes, once again it is I, Mani the purebred border collie, filling in for the guy I live with, and here to bring you up to date on the latest news from our garden. You may remember me from such posts as “Before It Snows”, among so many, many others. 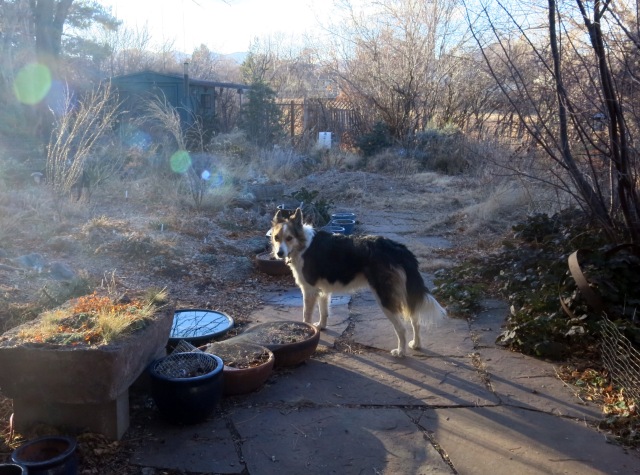 You may gather from the title of today’s post that it was extremely warm today. There are still small patches of snow from when it snowed three weeks ago, believe it or not, but the weather has been pretty delightful lately.

And if you know anything about Denver’s weather, you’ll know that tomorrow night it’s supposed to snow. The guy I live with explained that when it gets really warm, like today, it’s a sure sign that it will snow the next day. I personally think this is very weird.

The forecast also called for rain tomorrow. It never rains in Denver in the wintertime, but I guess there can always be a first time.

It’s been super dry here lately, but then, it’s always dry here in the winter, even if it snows. The snow evaporates in the sun, except in the places here and there where the sun doesn’t shine on them. Maybe you can see how dry it is. 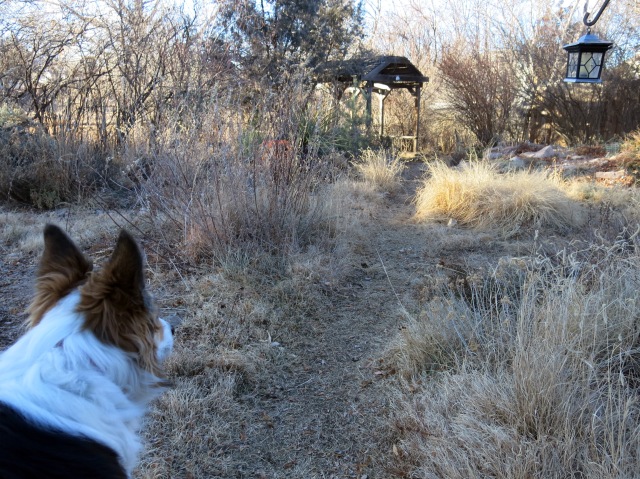 I realize that the next picture has a certain deficiency compared to the ones above, but the guy I live with thought this was a fairly good picture of the “way back”, which, as you may know, is a garden behind the hedge of lilacs you can see in the last picture. The one section of fence on the right is horribly leaning, and we’re not sure how to fix that. There’s probably a way.

You can also see that the bird bath still has not been fixed. The guy I live with said he hasn’t worked out how to fix the bath itself, since it broke into several pieces. 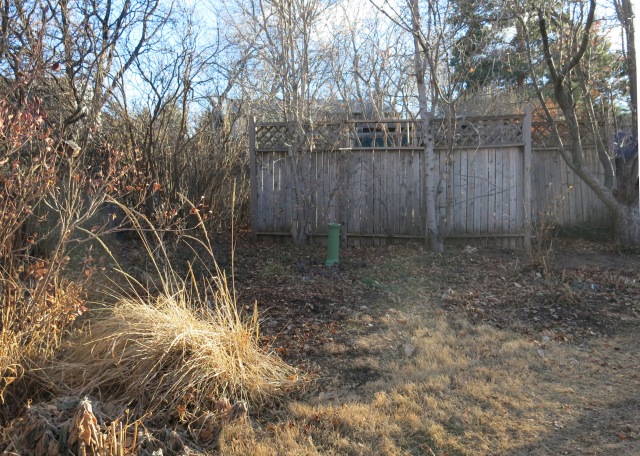 All this warm weather brought some visitors to the garden. The guy I live with said there were “zillions” of female red-wing blackbirds in the birch tree. I think he exaggerated just a little.

Red-wing blackbirds are birds of spring, and it was odd to see them here at this time of year. It does happen sometimes.

Then there was a raven on our walk this morning. 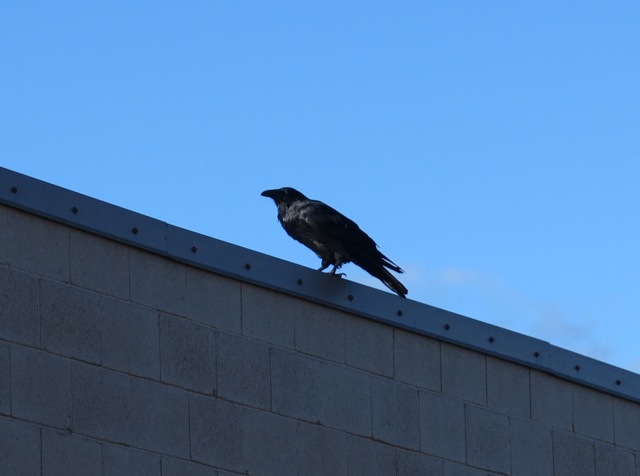 The guy I live with said that there were always ravens here, but that you didn’t see them a lot. Crows, on the other hand, are fairly new. You never used to see them, and now you see them all the time. Like blue jays, I guess.

The paperwhites are still flowering. The guy I live with said he thought this picture was interesting because you can see them in the mirror on the wall, too.

There are some new ones flowering, called ‘Inbal’, and he said those were extremely fragrant. Otherwise they look kind of a lot like the regular ones, which are called ‘Ziva’.

There’s an amaryllis about to open, too, as you can see.

In other news, a couple of evenings ago I saw this on the stairs. I wasn’t quite sure what to make of it. 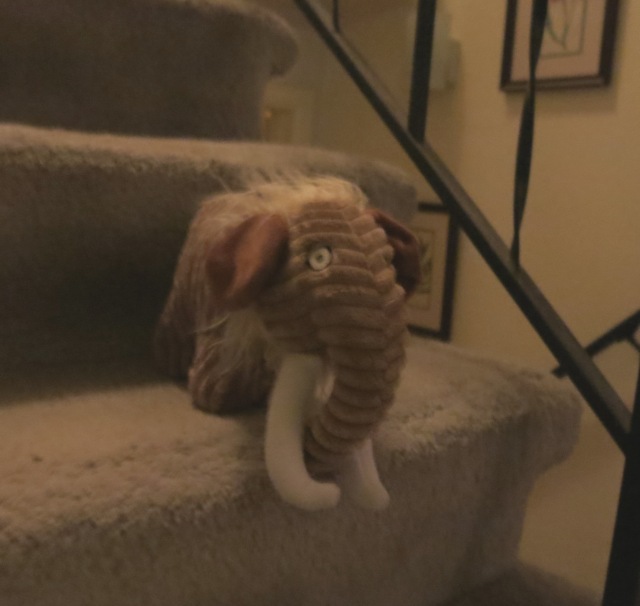 This is called an effelant, if you didn’t know. The guy I live with said his friend got it for Christmas, and that it was for me. I wasn’t sure about it at first, but now I really like my new effelant, almost as much as my Lamb Chop.

Sometimes the guy I live with leaves me here at home, even though he doesn’t want to, but I have all my toys to keep me company. The radio is on, too. He worries a lot about me when he leaves. I usually just take a nap, which he knows, but he still worries.

He said he knew when he brought me home for the first time that he was in for a good deal of worry, but it was what he wanted, instead of just being at home all by himself. His retirement has been nothing but endless worry, which irks him because he thought retirement would be all serene and stuff. It’s been anything but that. Having someone (that would be me) to worry over helps him, he said.

Anyway, I guess bringing me home for the first time was a good trade because I worry, too, like when I was on my morning walk the other day and I heard loud noises, and he said they were from the trash truck emptying the dumpsters in the apartment complex to the north of us, and even showed me the trash trucks, and also leaned against me to show that everything was really okay.

And I worry about him. Just the other day this came in the mail.

This came from The Temple Nursery, as I found out after what I thought was an excessive amount of fretting and talking about how we would have to survive on lettuce for the rest of the year.

I started to worry about the lettuce, which I’ve never had. It didn’t sound very good. The guy I live with said that Flurry, the first purebred border collie who lived here, liked lettuce and so it would be okay. I remembered that he told me Flurry also liked hot sauce, so I began to wonder.

He said everything would be just fine, and not to worry.