Greetings and salutations, everyone; yes, once again it is I, your popular host, Mani the purebred border collie, here to bring you up to date on our latest news. You may remember me from such posts as “The Project”, among so many, many others. 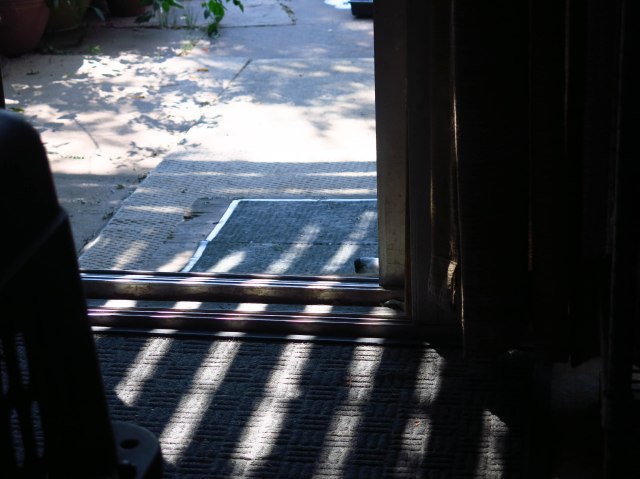 Pretty funny, huh? The guy I live with has an especially refined sense of humor. But of course you already knew that.

Today’s title is yet another example.  There is a serious side to this, though. When eastern Colorado was having all this violent weather, the guy I live with was ultra-agitated. He tried to seem nonchalant but I knew he was just faking it.

The sky on those days when severe thunderstorms struck looked like this, last Monday morning. This is looking south-southwest, in the direction of, say, Albuquerque. 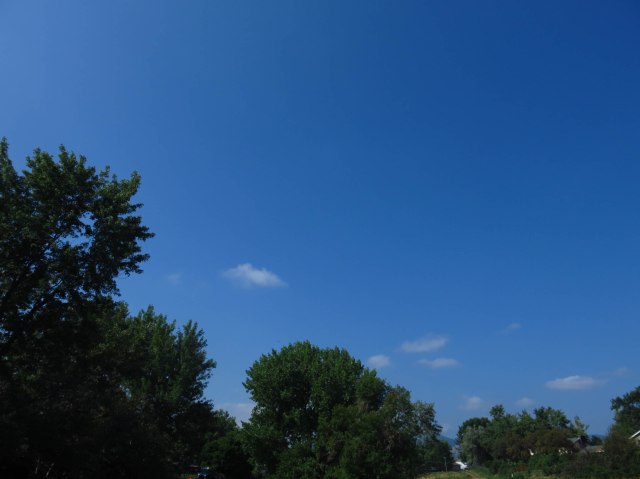 In the evening, out east, there was this. A terrific thunderstorm, about seventy miles away. (Not coming toward us.) We were still under a severe thunderstorm watch even though the weather was “way out there”.

Then on the next day of bad thunderstorms, the morning sky looked like this.

I guess this is where the phrase “out of the blue” comes from. There were really bad thunderstorms in the afternoon and evening. We were under a severe thunderstorm watch for hours. Naturally, the guy I live with wasn’t the only one who was agitated. I could hear the thunder.

Now the forecast is for nothing but sun, for at least a week. You might be able to imagine how happy that makes the guy I live with. Happy and relieved.

His idea of a nearly perfect life is to be almost totally becalmed. I certainly like an uneventful life, with maybe the occasional squirrel or rabbit to chase, excellent breakfasts and dinners, going on walks and seeing not-too-scary things, playing with my friends once a week, and sleeping in the cozy upstairs bedroom.

He says grasses are supposed to make you calm, which is one reason why there are a lot of them here. I’m only going to show this one, because it’s a little different. Achnatherum scribneri. It used to be called Stipa scribneri. Native to the Rocky Mountain region and I guess “points west”. 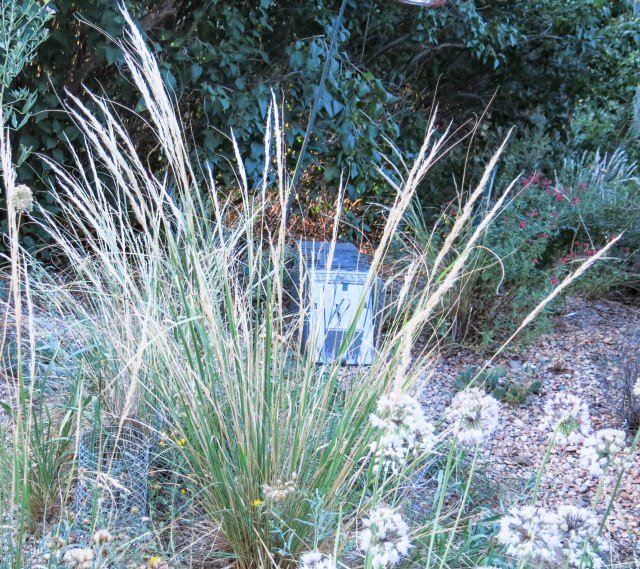 (The trap behind it isn’t set, if you were worried.)

Very little happened today. The guy I live with went shopping, and came back with something that pleased him very much: little spiral-bound notebooks, so he could write down important things. These notebooks, the kind with the spiral at the top, aren’t all that easy to find these days.

We have cicadas. The guy I live with loves hearing them.

He took some bird pictures, with the “big camera”, but he said the lens didn’t have vibration reduction and so the camera should have been on a tripod, which it wasn’t. We have a lot of goldfinches, and there’s a lot of eating. 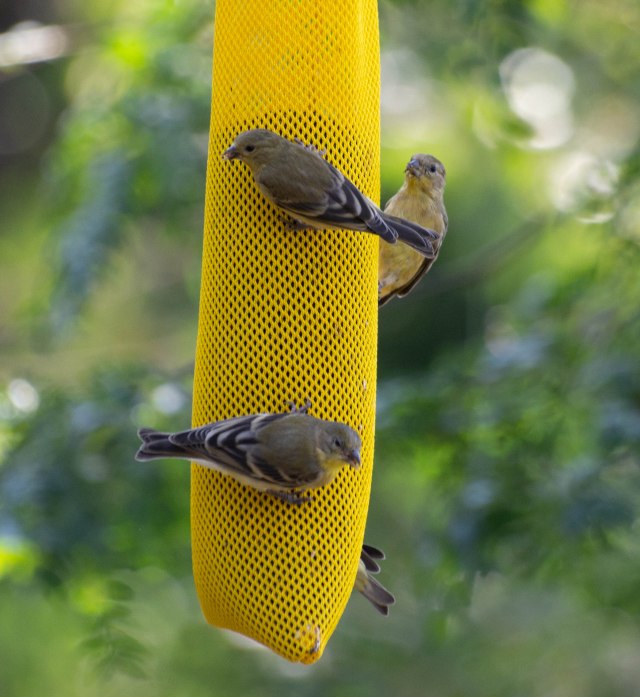 He looked up how to increase the shutter speed on the camera, and walked out into the garden with a red bandana tucked into his shirt, but all the hummingbirds disappeared.

Maybe tomorrow he’ll get all decked out in red so he can attract hummingbirds. I guess I need to learn how to operate a camera pretty quickly, don’t I?

10 Responses to thank you, calm again