the return of autumn

Posted on November 6, 2019 by paridevita

Greetings and salutations, everyone; yes, once again it is I, your popular host, Mani the purebred border collie, here today to talk a little bit about weather which some of you might find pretty peculiar. You may remember me from such posts as “The Haunted Toaster”, among so many, many others. I guess I don’t need to say that the snow has mostly melted, much to the delight of someone I know. The garden looked like this, yesterday. Kind of brown. There’s a squirrel in this picture. I like to bark at them, a lot. The guy I live with says that can be annoying. Like he doesn’t make a lot of noise. There are crocuses in flower now, too. 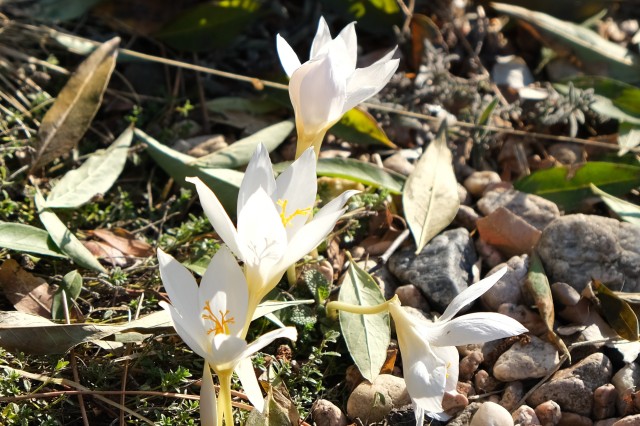 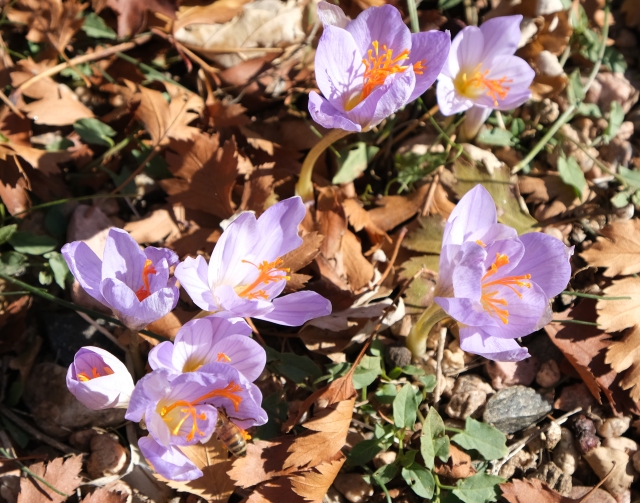 But I should go back to the couple of days before Halloween, to show how much it snowed, and how cold it got. Down to one degree, the night before Halloween. Of course I am super tough and like the cold, though my paws did ice up once or twice on my walks. The guy I live with reached down and cleared the ice from my paws, and we kept going.

This is that willow that hangs over the canal road. 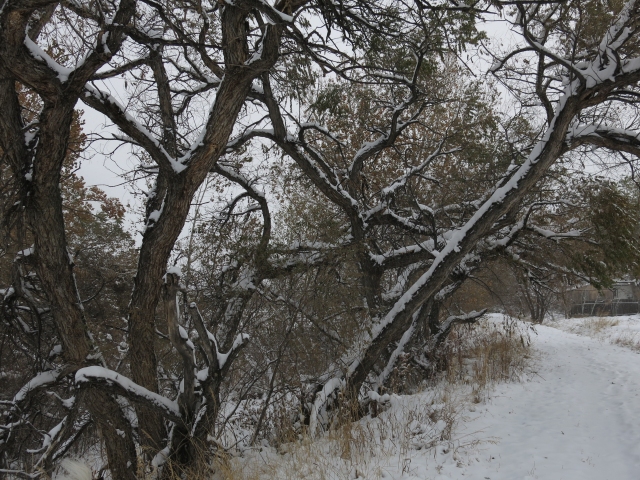 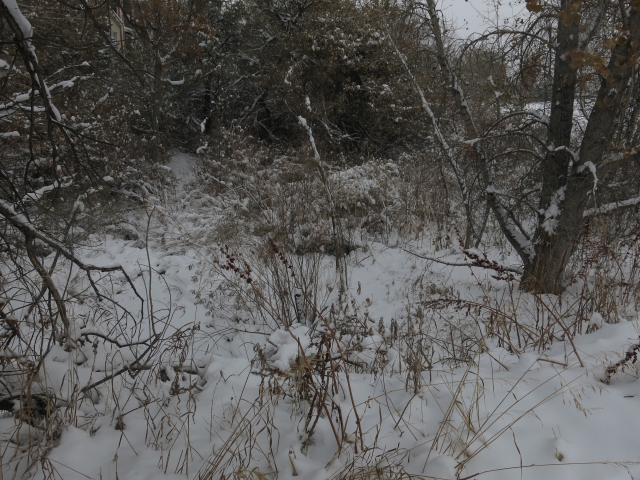 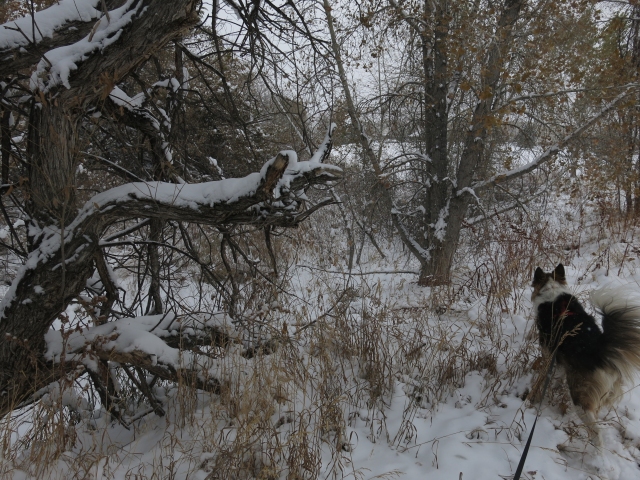 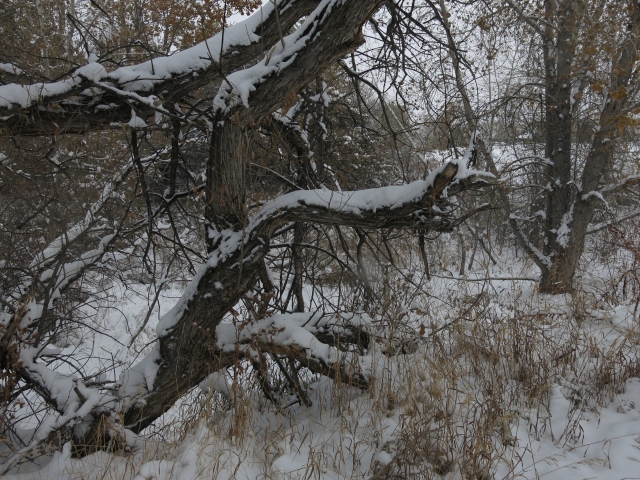 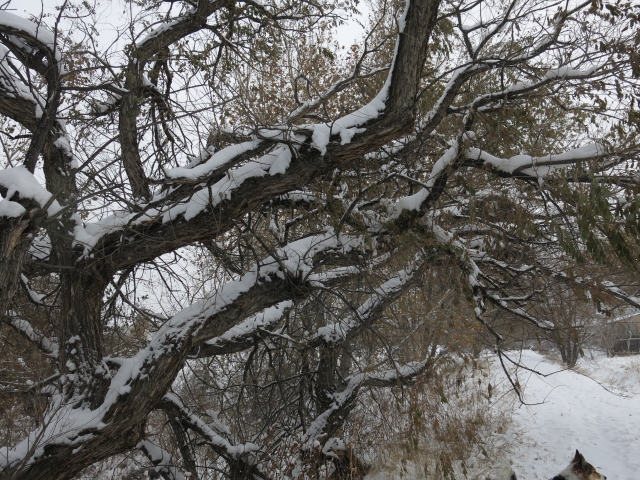 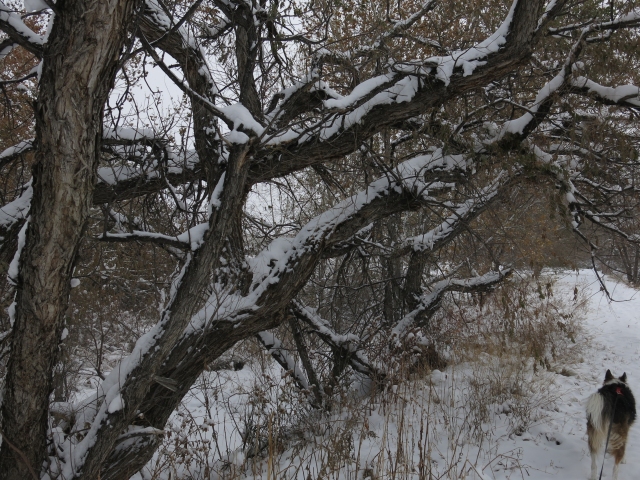 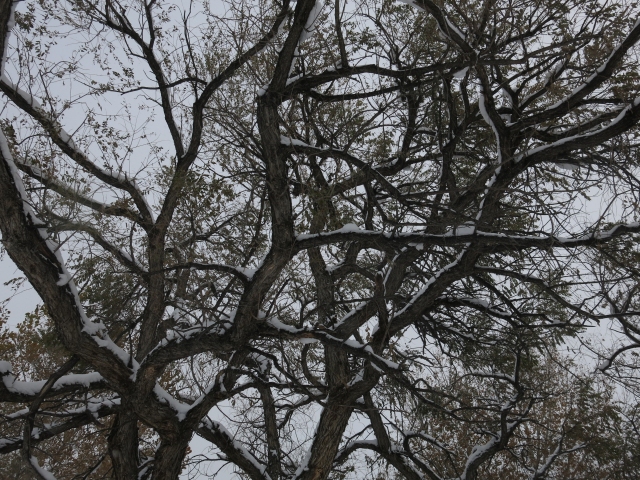 Then, like I said, it warmed up. The guy I live with went to the local rock garden chapter banquet on Saturday, with his friend, leaving me at home for an awfully long time, but I know he’s really happy when he’s with her, and that’s okay with me.

The weather has been mostly nice, ever since.  The leaves in the big cottonwood didn’t turn, they’re just dried, and rattle in the wind. The sound is so loud we can hear it in the kitchen, with the back door open, of course. Sort of a rushing sound, like water from the creek going into the culvert. 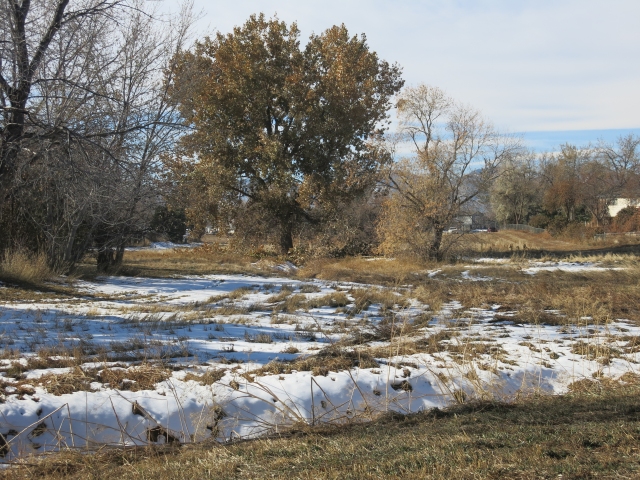 We’re getting more aerial visitors, too. You can see that I notice such things. We purebred border collies are excellent noticers of things. 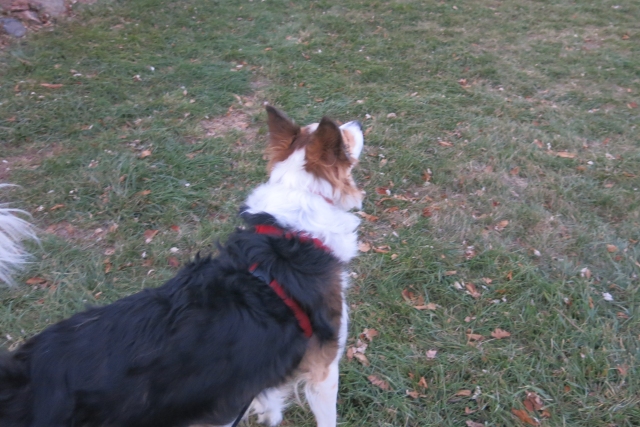 This is what I was looking at, in the neighbors’ yard. 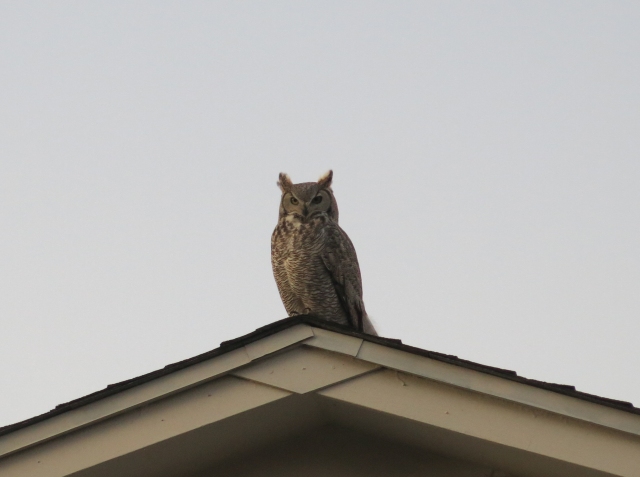 It was a nice sunset that evening, too. 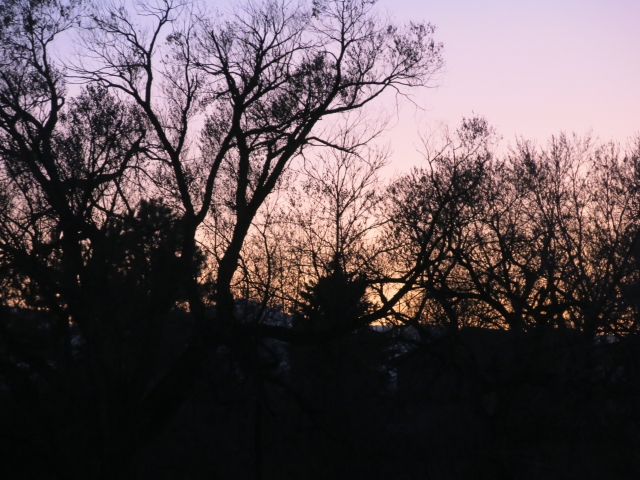 When the weather is pleasant, the guy I live with isn’t as sad as when it’s all snowy. But, and I thought this was pretty interesting, he realized today that a lot of this isn’t sadness, it’s what you might call left over anxiety from when he worked outside and had to drive on icy roads. He was sometimes stuck outside late at night, in below zero weather. Sometimes on telephone poles, even.
Maybe that’s one reason why he likes to be at home with me, all cozy and everything, lying under the covers in bed, with me right next to him.
I know that Chess, the purebred border collie who lived here before me, talked about the pre-bedtime nap, which is “a valuable addition to our modern lifestyle”, and I should explain that when we’re watching Monty Python, the guy I live with is lying on the bed with his clothes on, and a blanket over him, so it really isn’t bedtime, just the pre-bedtime nap, which is a preparation for bedtime. Like you get used to lying there, and warm up the bed a lot.
But sometimes he falls asleep, and then wakes up, because I have to go out, at Tinkle Time, and sometimes it’s later than usual. One time it was almost two o’clock in the morning. That was pretty weird.

Well, anyway. Today it started out nice, in the mid fifties, and the guy I live with went to the store, to get me some food, and to buy bird seed, too. Not at the same place.
When he went out of the store, the temperature had dropped twenty degrees, and there was a cold wind blowing from the north.

He came home, put away the groceries, put the bird seed in the cans out on the patio, hung the roosting pockets he got in the mail (these will keep birds warm at night), then I had my dinner, and we went on our walk.

In the mist. That was totally cool. It hardly ever mists here, but this evening was a misty one, and so we walked for quite a ways. I got fairly damp, but was dried with a towel when I got home.
The guy I live with took a bunch more willow pictures, but this time, of willows in the mist. Some of these are pictures of the same willows, but at different angles, especially of the one that hangs way over the path on the west side of the creek, and also the one with the big broken branch, which you can see quite easily. It’s kind of scary. We don’t walk under that tree.
These are willows to the south of us, growing along the creek. We follow the coyote path to where it stops, for us anyway. 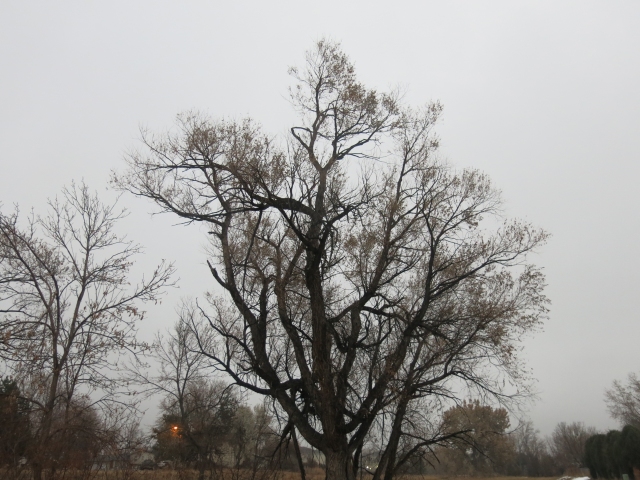 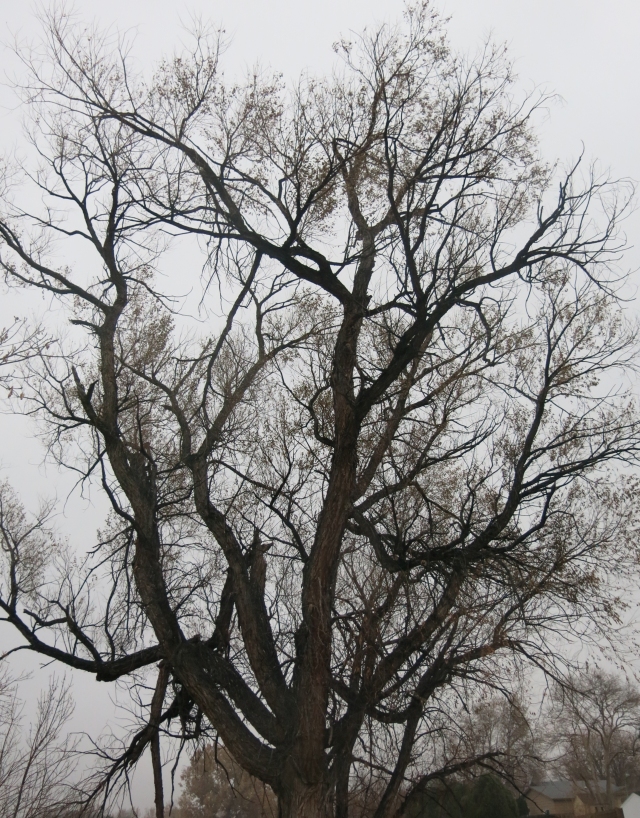 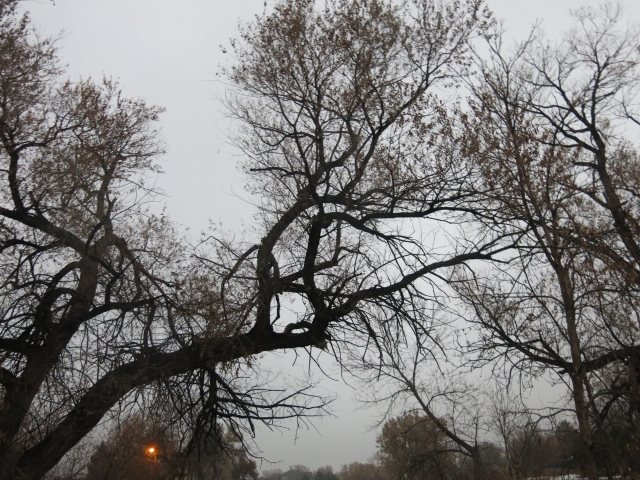 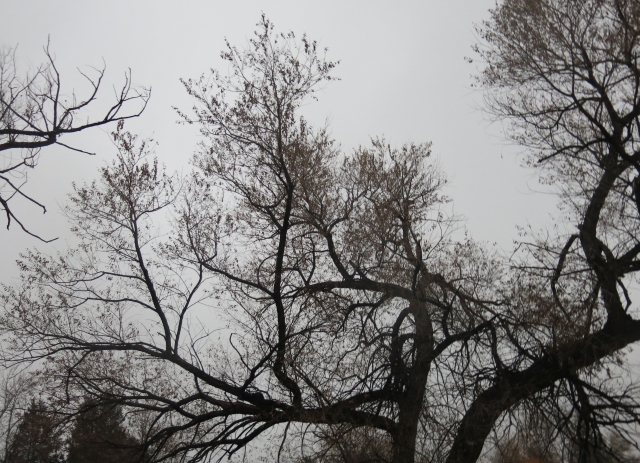 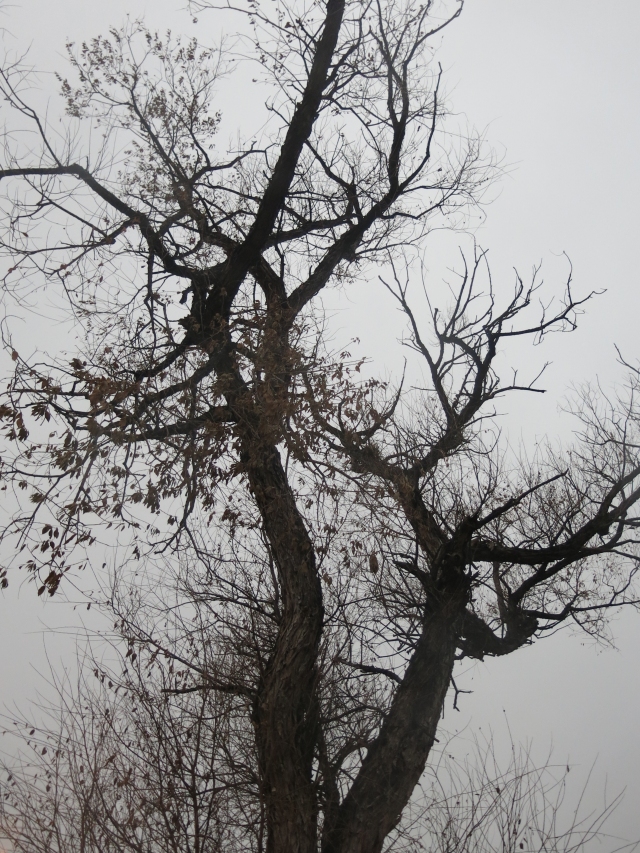 He said this next one was his favorite picture of the group. 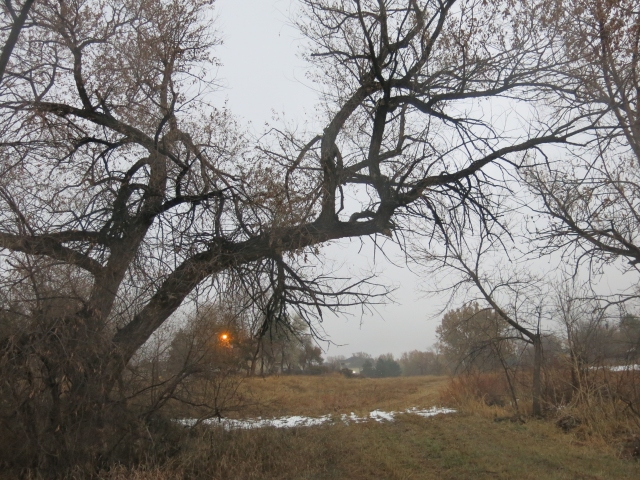 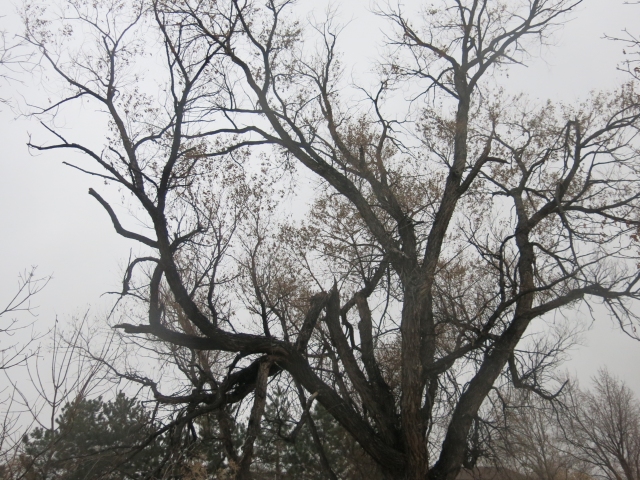 Well, that’s pretty much it. It got really cold, then warmed up, then got all misty this evening, but by the weekend it’s supposed to be seventy degrees. The guy I live with says that’s more like it. 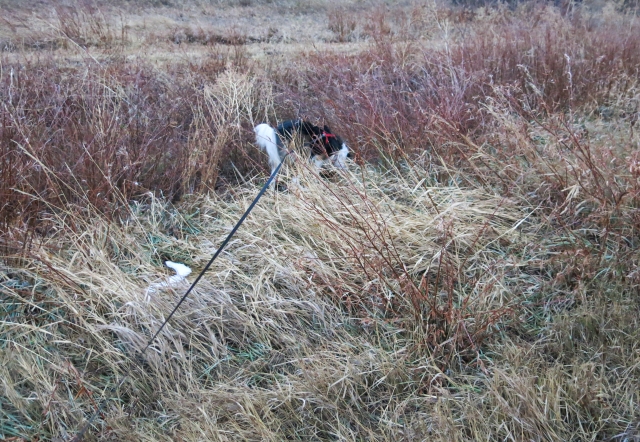 20 Responses to the return of autumn