a walk at sunset

Greetings and salutations, everyone; yes, once again it is I, your popular host, Mani the purebred border collie, filling in for the guy I live with, and here today to bring you, well, just some stuff. You may remember me from such posts as “Sunsets, Shadows, And Snowdrops”, among so many, many others.

You know how you do something and then a little while, or a long while, later, you think you should have done something else? Maybe it’s just the guy I live with, but now he wonders why he didn’t plant more of the native birches in the garden here. True, it’s had a rough time over the years, but it’s still here, and it’s always attractive. Sometimes the branches die, but then the dead branches attract downy woodpeckers, looking for bugs.
The native birch, Betula occidentalis, is actually native to the big creek just to the north of us, Bear Creek, but it’s hard to find in nurseries. This one was purchased about thirty-five years ago from a local nursery that specialized in native western plants.
The guy I live with said he saw a couple at another nursery last year, and he might drive out there next year to see if the nursery still has them. It “would be cool” if nurseries sold him plants in the middle of winter, but I guess they don’t.

He and his friend went to Denver Botanic Gardens a couple of days ago and he said he wished that the garden here had been more Japanese in style. He especially likes this little entrance gate, which he said was called a hougei, which I guess is Japanese for “welcome”.

But the construction in the garden here, which was mostly done by his wife, is very satisfactory. The fence around the enclosure is sort of falling apart, but that can be fixed. You can see one extra-slanty bit right here. This picture was taken a couple of days ago, when the guy I live with sawed off a big branch on the apple tree that the snow had broken. Here I am guarding the piece of branch. 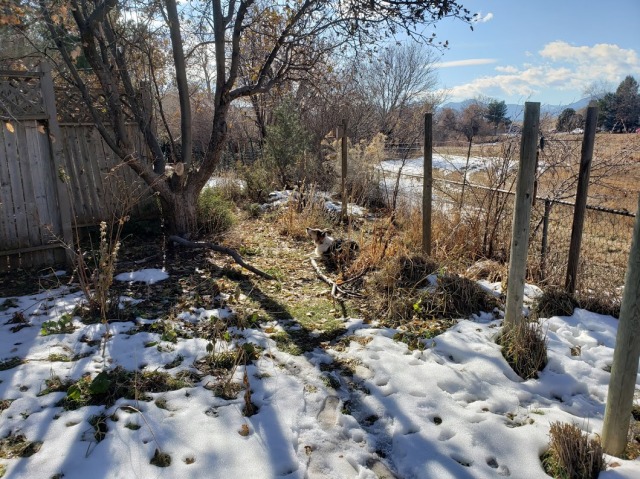 Well, a weird thing has happened. Not really weird as in creepy, just very unusual. The water in the canal is flowing again. That maybe has never happened before. (This, like the picture above, is a not-very-focused phone picture.)

There are a lot of crocuses in flower now. It was seventy-seven degrees yesterday, and almost that today (so you can tell it’s going to snow tonight…), and the crocuses really liked that.  Crocus speciosus is in flower all over the garden.

The snow will wreck them, but there will be more.

This is Crocus cartwrightianus ‘Halloween’, a little bit late.  The guy I live with says this is a “crummy phone picture”. He said the phone can take good pictures, but it doesn’t always. He says it’s probably not the phone’s fault.

So on our walk this evening we noticed that there might be a pretty nice sunset, and it turned out that our noticing was pretty accurate. We both try to be expert noticers of things. The guy I live with purposely does not pay attention to a lot of stuff, so he can notice the things that are more important to him. Like sunsets.

Oh, of course we heard and then saw an owl, but it wasn’t sitting in a place where we could get a good picture. So the sunset pictures will have to do. 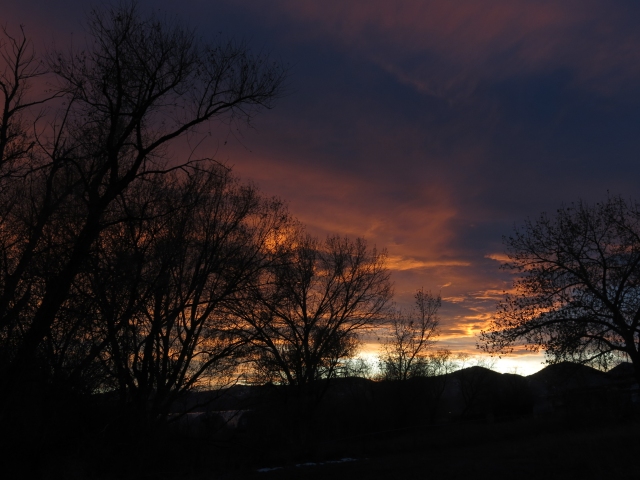 And that was our day. I’ll leave you with a picture of me, heading home on my walk, at sunset.

36 Responses to a walk at sunset