Greetings and salutations, everyone; yes, once again it is I, your popular host, Mani the purebred border collie, here today to bring you up to date on stuff that’s been happening here, which, really, is not a whole lot at all. You may remember me from such posts as “Still More Summer”, among so many, many others. 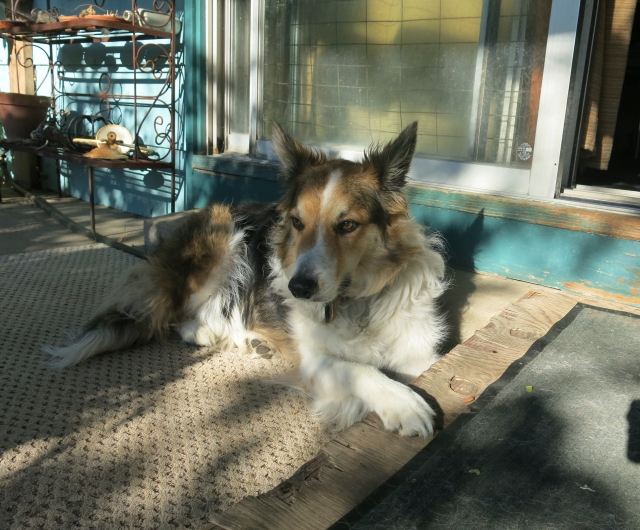 Pretty sophisticated, huh? I mean if you ignore the condition that the ramp is in. The guy I live with’s late wife built that for Flurry, the first purebred border collie who lived here, when he got to be really ancient.
The guy I live with occasionally says stuff about replacing the ramp, but I think he’s too sentimental to do that. Since there are two sliding glass doors, the what I guess you would call “stoop” is shorter than usual and so a ramp was necessary. It is nice to have a ramp of one’s own, no matter how derelict it’s getting.

Anyway. I know this might be hard to believe, but it rained here. 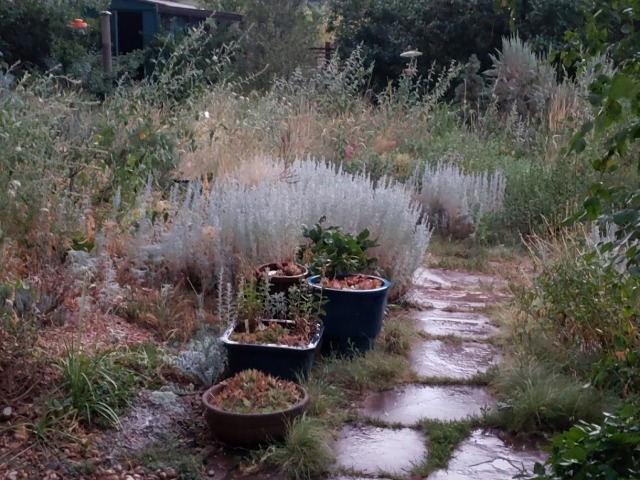 Not what you would call a soaking rain; a little over three millimeters. But at least it was rain.

It’s cooled off a little, though still hot, and still dry, despite the rain (if you know about rain, you know that three millimeters is hardly anything, though the guy I live with was still grateful for it).
Some plants have been doing perfectly well despite everything.

I guess you really call these Hylotelephium or something like that, but we still call them sedums. The ‘Desert Red’ is a lot redder than the picture suggests, by the way.

I know they look pretty hopeless, but in fact most of them are doing okay.
So many plants in the garden are not doing anything like okay that having some desert willow seedlings is something to feel good about.

There have been some other things. The guy I live with didn’t go to the plant sale. He got a very late start, and then after he drove off, realized he’d forgotten his hat, and was so discouraged that he turned around and drove home.
This is something that’s been bothering him ever since the first stay-at-home order here: he hasn’t gone out very much, and every time he does, he forgets something, like his wallet, or his mask, or something that, say, last year, he would never have forgotten. And so he feels weird about this.

The other thing, which the guy I live with would agree was much more important, was my what you might call digestive issues. I started having some problems, and I could tell that the guy I live with was pretty concerned, and he even called my doctor.
He told me that he was very experienced with this sort of thing, like when Chess, the purebred border collie who lived here before me, was sick, or Slipper before him, but at the same time had to keep reminding himself that he could get in the car and drive to the doctor’s. It’s not very far at all, but this hesitation was because he hasn’t gone out very much at all; going out has become a little strange to him.
He found a can of sweet potato in the pantry and gave me some of that, and after a couple of days everything was back to normal.
As normal as things could be, these days.

Since, as maybe you can tell, we kind of value continuity, it was pleasant to see that the owls have returned. 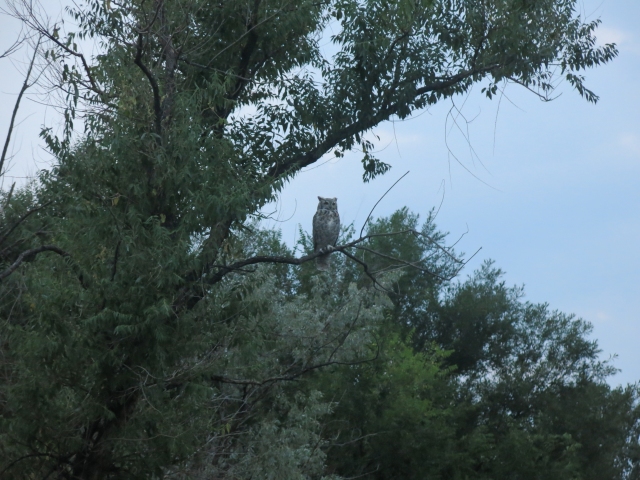 And we’re still seeing striped kitties on our midnight walks. I realize this is an awful picture. (I didn’t take it.)

So that’s what’s been going on. This and that, I guess you would say.
It’s not supposed to be so ridiculously roasting hot next week, and that alone is good enough for me.