Greetings and salutations, everyone; yes, once again it is I, your popular host, Mani the purebred border collie, here today to explain why I’ve been gone for so long. You may remember me from such posts as “At A Standstill”, among so many, many others.

Or maybe I should say characteristic run, since I was going out to check something. It was really cold.
You can probably see that it snowed here. I forget what day this was; the guy I live with says it’s never going to stop snowing here, and that it’s just more endlessness.

Lots of people who live here go wild every time it snows, talking about “moisture” and stuff like that. He says that’s a holdover from when everyone had bluegrass lawns, and people really wanted the Denver area to look like, say, Virginia, but that since it only snows in the winter here, and doesn’t rain, people pretend it’s the same as rain, even though it isn’t.
Most of the snow here evaporates, in a process called sublimation (I learn stuff, sometimes), and the snow that melts only penetrates the soil maybe half an inch, and then it freezes, and causes more problems for plants.
The way winters were, so I hear, is that they were mostly warm, with occasional cold, or really cold, spells. Winters here lately have been chilly almost every day.

Anyway, last week they were predicting super cold for us on the weekend, and the guy I live with was pretty freaked out. We do have super cold here, but I think he was on edge because of the fire earlier, and he started to worry that the furnace would go out. He has a service plan that would take care of that, but he was still nervous.
We got a dusting of snow, and on Saturday we had a high of two degrees (-16.6C), which I thought was perfect weather for a walk, though my evening walk was cut short because the guy I live with thought it might be okay for me not to wear my boots, but it wasn’t. My paws iced up.
Sunday night it got down to -11F (-23.8C), which was cold, believe me. So cold that the guy I live with went outside with me at Tinkle Time, just to make sure, you know. Nothing happened to the plants in the garden. And the furnace worked perfectly well.

A week or so before the cold struck, the guy I live with got a call from his doctor’s office, saying he needed to come in and get vaccinated, but it was for something called “shingles” instead of Covid-19. He was kind of disappointed that he couldn’t get the latter (that will be next month), but it was very important not to get shingles; he knows someone who lost the sight in one eye because of shingles.
And so, naturally, he worried about the car not starting. So he had two worries, all last weekend. I know, because I was there.
The car started up just fine on Monday, and he “took it out for a spin” on the highway, and then went to the doctor’s the next day.
He felt fairly icky the day after the shot, but got better. He also felt “more than stupid” about the worrying, but I know there are what people call “extenuating circumstances”, kind of like when I get nervous and have to hide in one of my forts. 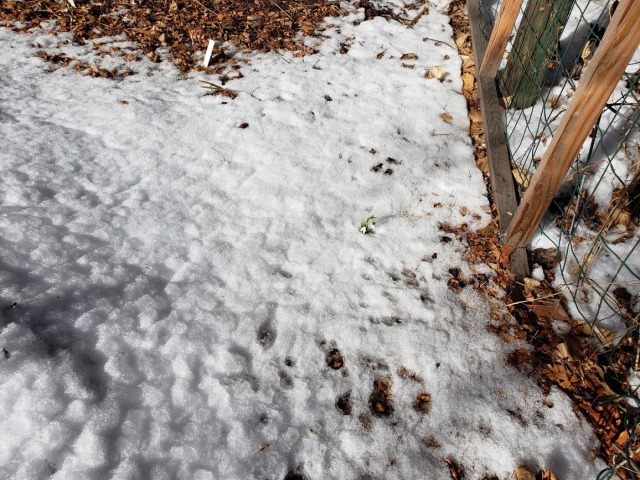 There are actually two snowdrops in the picture; one by the plastic label, too.

That’s really all I have for today. I’ll leave you with a blurry picture of me, on my evening walk, before it started to snow…again.