Greetings and salutations, everyone; yes, once again it is I, your popular host, Mani the purebred border collie, here today to bring you the one thousandth post on this blog.
You may remember me from such non-thousandth posts as “Mice In The Rice”, among so many, many others. (Obviously.)

Here I am in a characteristically horticulture pose. I’m supervising, of course.

I think the trash can adds a certain something, don’t you?

Uncharacteristically, some work is being done here. I know that’s hard to believe.

A few plants have been planted, but not many. A lot of them had rootballs so packed with roots that the guy I live with used the Super-Genius™ method of getting them to root. Namely, you repot in a larger pot, surround the root ball with sand, and then water for a couple of weeks, and, usually (but not always), roots will leaves the root ball to get water.
Tightly-packed roots can only get so much water, so this helps the plants establish in a dry garden much more quickly. 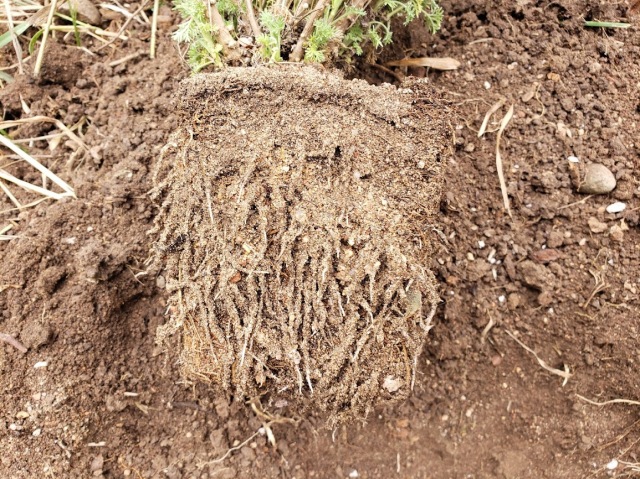 The other work that’s being done is on the lilacs. The guy I live with is no longer happy with the big green hedge of lilacs that rarely flower here, and just sit there being green all summer, so the first thing that’s being done is removal of the older, larger stems, of which there are a lot, because the lilacs have been neglected for such a long time.

The guy I live with’s wife used to do this. I wasn’t here at the time, so it’s a little hard for me to understand how much he misses her, and her help in the garden. Tomorrow would have been her sixty-fourth birthday.
I guess she would work on the lilacs for about a week. She was much more of a perfectionist than someone I know is.
Maybe you can’t see the gap in the lilacs here, but it’s definitely there.

That’s Solidago ‘Wichita Mountains’ in flower. The guy I live with thinks this is just a form of the variable Solidago speciosa, but since he doesn’t know one goldenrod from another, this name is fine. It comes from the Wichita Mountains in Oklahoma. Bees love it.

You can see here that the Acer grandidentatum is turning color. Not as spectacularly as in some years.
And you can see the wall of green lilacs, which the guy I live with says looks weird. Partly because of the abrupt transition from the dry border to all-of-a-sudden green lilac leaves.

And you can also see the gap, right over the sagebrush.

There are some crocuses in flower. The guy I live with has been watering, a little. These are Crocus kotschyanus.

And this one, which is called Crocus goulimyi ‘Mani White’. I was very disappointed to learn that it was named for the Mani Peninsula in Greece, and not for me.

This is growing in a pot because someone forgot to plant it in the garden earlier this year. It will go back into the bulb frame pretty soon, to spend the winter there, and then get planted in the garden next year.

Speaking of spending the winter here, the guy I live with turned off the faucet last night and heard some rustling among the dry grapevine leaves clustered by concrete downsplash block.
This afternoon he went to turn on the faucet again and noticed he was being watched.
It is almost that time of year, after all, when spooky things happen, and you have the feeling that something is watching you.
It kind of gives me the creeps, though.

I guess the bullsnake–the very large bullsnake–will be spending the winter with us. There must be a huge burrow under the downsplash block. There’s a hole there, and the guy I live with said he’s often thought about filling it, but reconsidered because he also thought someone might be using it. And someone is.

We’re used to seeing burrows in the garden, since we sort of live out in the country.

That’s all I have for today. I know it’s hard to believe that there are actually a thousand posts on this blog, but there are.

The guy I live with posted a picture of me walking among fallen apples, on Facebook, but I’ll leave you with another, much more atmospheric one taken this evening.

33 Responses to one thousand posts