Greetings and salutations, everyone; yes, once again it is I, your popular host, Mani the purebred border collie, here today to tell you how dry it is here. You may remember me from such posts as “Dry Grass”, among so many, many others. 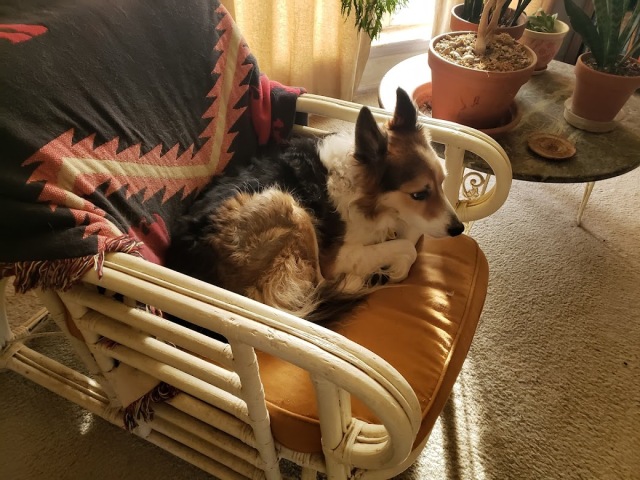 The guy I live with had just said “Good morning” to me, which is why I look so alert.
I often sleep in this chair at night, which the guy I live with says is funny, and comforting in a way, because so many purebred border collies who lived here before me have slept in this ancient rattan chair at night. Maybe it has a vibe or something.
It’s one of those “continuity” things, but I know when he sees me in this chair it makes him miss his wife even more. She loved her purebred border collies to distraction.
I sometimes do sleep on the bed with the guy I live with, at night, when it’s chilly. He says he sleeps better when I’m next to him. There are a lot of my plush toys on the bed, too.

Anyway, it’s been super dry here. They said it might rain yesterday, but all we got was some sprinkles.
I didn’t see so many grasshoppers today, maybe because the nights have been so chilly. It almost froze the other night.
And yet at the same time, the autumn color has been pretty nice. You can see that the Russian hawthorn, Crataegus ambigua, has turned a nice color.

There are still some haws on the little tree. Usually squirrels get them.
I understand that, years ago, the squirrels wouldn’t get them, and the haws would fall on the rock garden below (not much of a rock garden these days); Slipper and Chess, two purebred border collies who lived here before me, would graze on the haws, like cattle or something. I guess the haws have a lot of Vitamin C in them.

You can also see the field behind the garden, because the lilacs have been cut down. Or almost cut down.

You see that little juniper almost in the center of the picture? That’s Juniperus communis ‘Taurifera’, but just to the left of the rocks by it, there are lots of Crocus speciosus in flower. They were sown by ants, who like the sticky-sweet elaiosome covering the seeds, and carry them off to their nest, occasionally dropping some of the seeds. 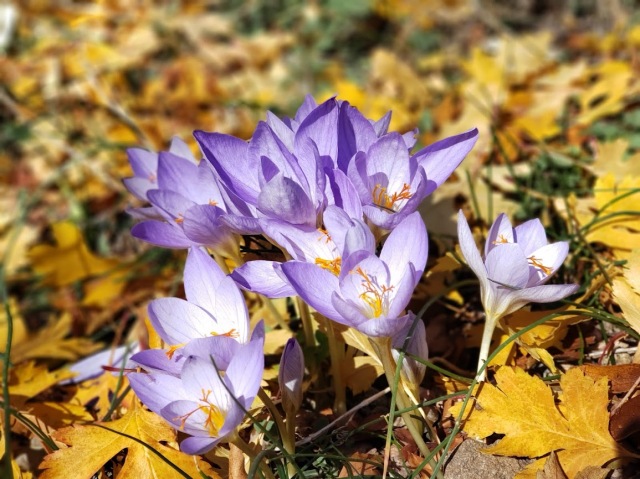 The dwarf oak has turned color, too. 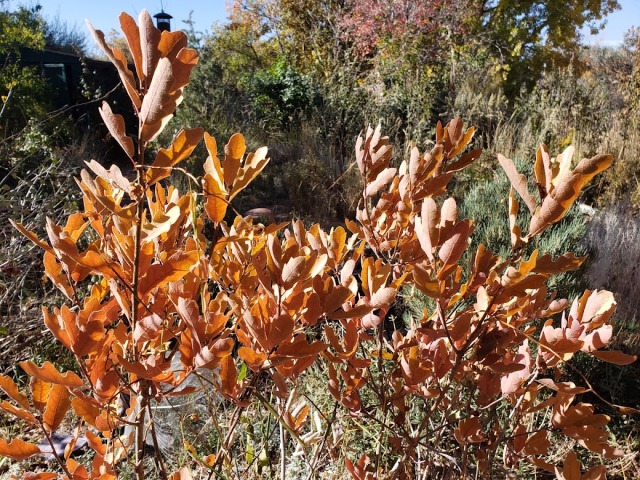 The guy I live with doesn’t know what species this is. Probably Quercus × pauciloba. The acorns are the size of a pea.

The little shade garden on the north side of the house is partly still green, because of all the hellebores. That’s a mockorange on the right, one of the regular ones, and another mockorange on the left (Philadelphus lewisii), that have turned color.
This little garden is where most of the snowdrops live. 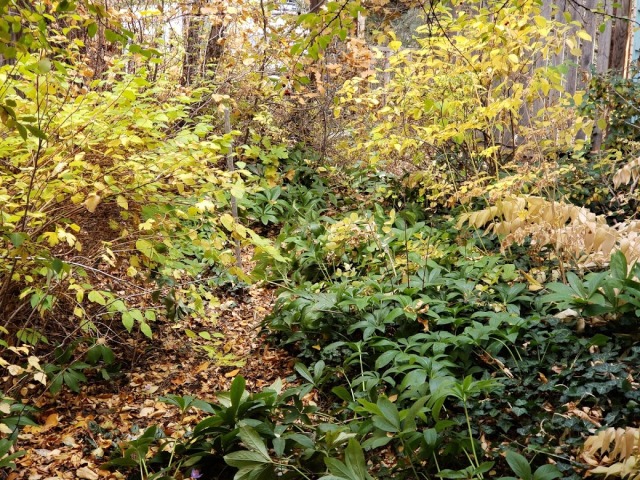 When I go on my morning walk, I’m often surprised by how dry it is. Even the weeds have dried up. This part of my walk is mostly weeds, though the guy I live with often talks about the few healthy native plants in this area, which is north of the canal road I walk on.

The water is still running in the canal; I haven’t seen any trout in it at all this year. I know there are trout, usually, because the guy I live with will say, “Look, a trout!”, even though I almost never see it.

The cottonwoods are turning color, too, though not all at once, because they’re not clones.

The guy I live with loathes the word “clone”. He says it’s an ugly word, and is often misused in horticulture, when the word “form” is meant. A clone would be like all the cottonwoods grown from cuttings from one tree. A cottonwood that had turquoise leaves would not be a clone; it would be a form.

The willows haven’t turned color yet; I forget if they even do turn color, or if the leaves just dry up and fall to the ground. I should probably pay more attention to that.
I’ll leave you with a picture of me walking under the willows.
You can see I’m getting pretty close to the scary one that hangs over the path on the west side of the creek. I would have said to wish me luck, but I made it past the tree, and am here to tell you about it. 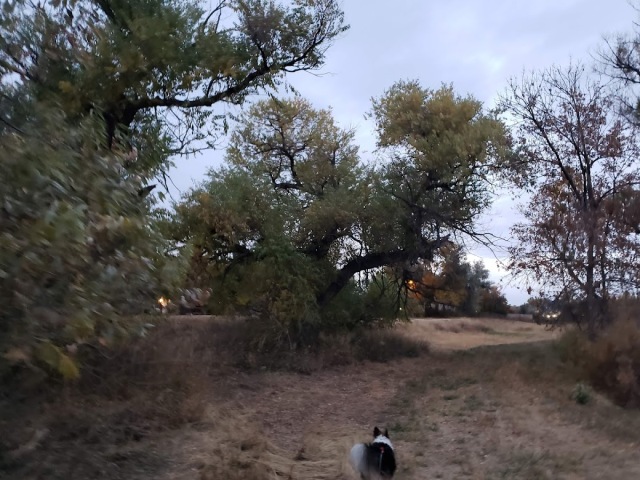