Greetings and salutations, everyone; yes, once again it is I, your popular host, here today to talk about snowdrops, and some sentimental stuff. You may remember me from such sentiment-oriented posts as “A Short, Sentimental Post About The Couch”, among so many, many others.

As I’ve said before, the ramp I’m lying beside was made by the guy I live with’s wife, so that Flurry, the first purebred border collie who lived here, could go outside when he got really old and creaky. The ramp is in pretty bad shape but the guy I live with isn’t going to replace it. It adds a certain sort of sentiment, I think.

Speaking of that, today marks the seventh anniversary of the death of Chess, the purebred border collie who lived here before me, and a very popular narrator of this blog. Like his cousin Slipper, and his wife, Chess died here at home. In the movie “Oliver’s Travels” there’s a line, “We are quite comfortable with our ghosts”, and that’s the way it is here.
He was going to do a post anyway, about snowdrops, but then decided that mentioning this was the right thing to do, so as not to seem too self-absorbed.

The guy I live with was well aware of what today meant, just like he knew what yesterday meant, when he went to see his friend.
He remembers dates, because they have numbers in them. Thursday is Reginald Farrer’s birthday; maybe the guy I live with will read something from his books to me. He says Farrer didn’t like snowdrops as much as he ought to have liked them, but that his friend E.A. Bowles certainly did.

All of this was prompted, though, by a visit to the mail box, because mail was delivered today.
The guy I live with noticed this when he opened the front door. This isn’t one that snowdrop enthusiasts would find interesting, but it’s here, and that’s what’s important.

This is a big deal, for two reasons. The first is that this is a self-sown seedling from the main colony of snowdrops at least twenty feet away, in the shade garden. The second is that this is in the front yard, which has not been watered since 1987, so this is a very dry situation for snowdrops, except in late winter and spring.

There are others. This one is very close to ‘Theresa Stone’ in appearance. 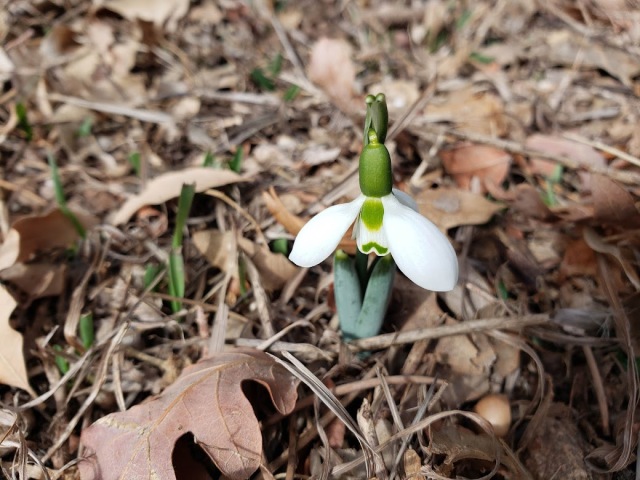 So, naturally, the guy I live with said he was going to transplant a bunch of Galanthus elwesii, which is what these are, into the front garden.

There are a lot of snowdrops “escaping” into the front garden, though most of them are covered with snow now.

The main group is starting to flower; some of the flowers were picked apart by birds, so the guy I live with put two “French scare cats” in that garden. You can see the cats in the “header” for this blog. 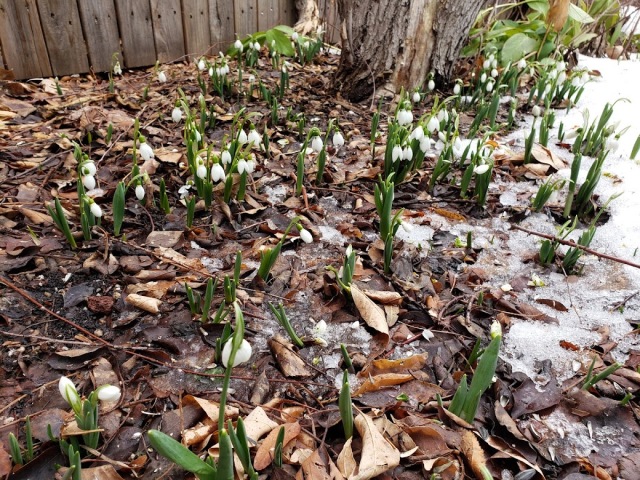 There will be even more snowdrops there in maybe a couple of weeks.

Not much else is happening here. There are snowdrops in flower in the frame, which is the farthest one away in this picture. Yes, the plastic-covered frame is ugly.

By the way, when the frames are removed, the guy I live with said he’s going to have to put a fence along the “North Border”, but it has to be “vintage fence”, like this. He was hoping to go to the place in Morrison (not too far from here) with his friend, to look for some, but discovered the store had closed, like so many other stores, lately. 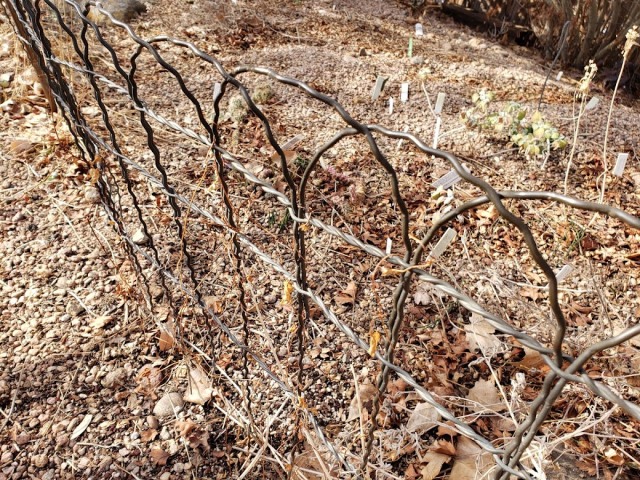 He says otherwise I’ll trample everything while I’m busy barking at squirrels. Squirrels do need to be barked at.

Here’s another form of Galanthus graecus. 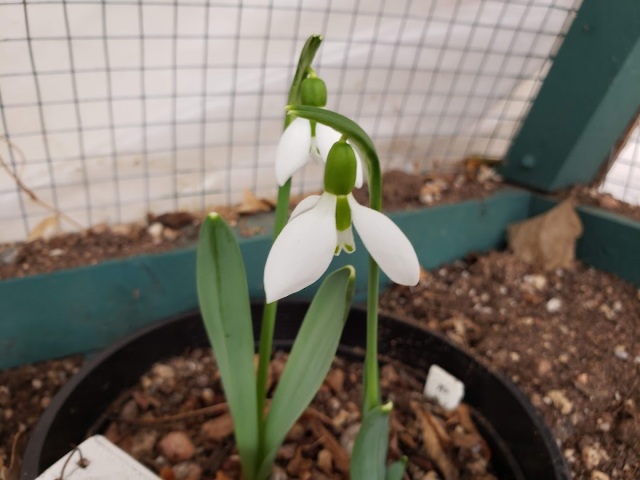 And finally, Crocus laevigatus is sort of flowering. This typically flowers earlier, but the soil has been pretty cold here.
Even though they’re not much to look at right now, the guy I live with was glad to see  them, because he couldn’t remember where the corms were planted, and thought they had died. 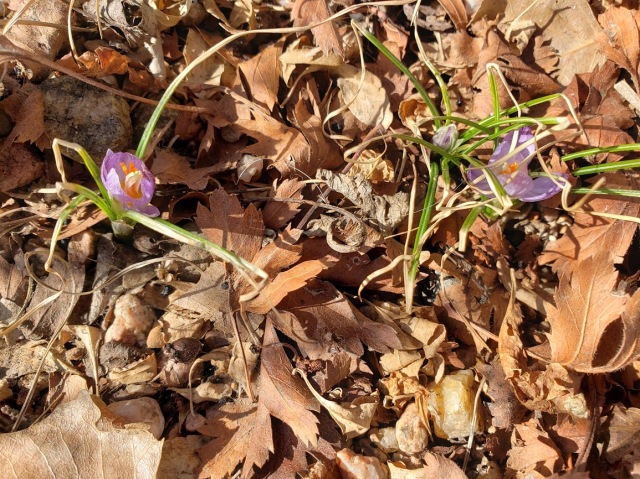 Well, that’s it for today. I hear I might get extra treats and cuddles because of what day it is.

I’ll leave you with a picture of me surveying my domain.

8 Responses to snowdrops and sentiment