Greetings and salutations, everyone; yes, once again it is I, your popular host, Mani the purebred border collie, here after a long absence, which I’ll explain later. You may remember me from such posts as “Sad Little Mysteries”, among so many, many others. 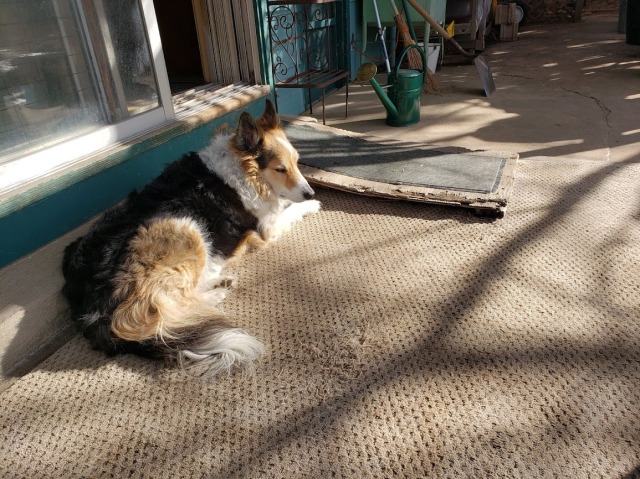 You can see that the ramp, built for aging purebred border collies, has seen better days, and now it’s kind of bouncy. The guy I live with said he might reinforce it, or even replace it, though I think replacing it isn’t very likely.

It was really cold last week. I mean really cold, with a high of like three degrees (F) on one day.
The guy I live with took this picture of our garden one very cold night.

There wasn’t any reason to make a post except to say how cold it was, which wouldn’t be very interesting.
And then it warmed up. It was over seventy degrees (twenty-one Celsius) the last couple of days, which isn’t all that unusual for winters here.
The snowdrops and other things enjoyed the warm weather. The snowdrops are over a month late.

This is Colchicum hungaricum ‘Valentine’, flowering in the bulb frame.

There’s still a lot of snow in the garden, even though it’s been so warm. 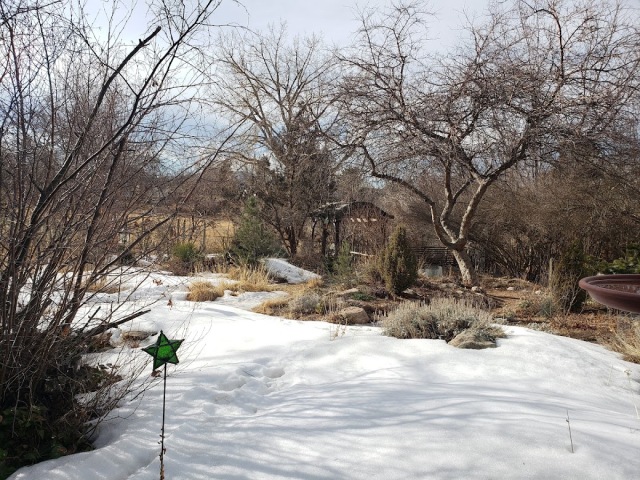 The guy I live with says it’s not melting, or evaporating, fast enough, because it’s supposed to snow all next week, and so the snow would just pile up, which he says is very tiresome.
He’s sick of the snow and ice, and hurting his hip sliding around on the ice in the garden and out in the field. We have one more day of warm weather before it gets cold again.

The cold has been hard on both of us. No gardening, for one thing. And of course, when people hear how cold it’s been, and for so long, inevitably some people tell the guy I live with that he should move, as though his main interest in life were gardening, which it isn’t.
And then there was someone, after they heard that he lives in the house in which his wife died, who also told him he should move.
Which brings me to the title of my post.

That made the guy I live with pretty unhappy, and also very angry. He said that offering unsolicited advice is very hostile language, and hurtful, too. On top of the almost constantly awful news these days, this was just too much.
Ever since his wife died, the guy I live with has been ultra-sensitive to the thoughtless things people say, and doesn’t know why people say things like that.
I certainly wouldn’t want to leave my cozy little house, and my big back yard with squirrels to bark at, just because someone had it in their head that this would be a good idea.
And I know the guy I live with likes having all these memories of his wife, and the happy times they had together, scattered throughout the house.
I’m going to show some of these, now. I’m aware that I’ve shown things like this before, but the guy I live with said it was time to show more, partly because he was so irritated by “brainless” advice that he should move, and I guess also to illustrate what it’s like to live in a house haunted by memories. Haunted in a good way.
I don’t know what all of these things are, and, in some cases, neither does the guy I live with.
This box is in our bedroom, and was made by the guy I live with’s wife. 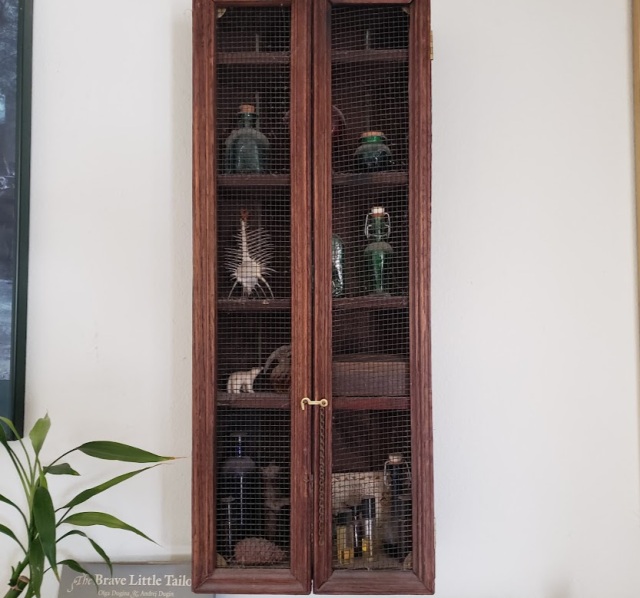 I think these are medicinal herbs.

That’s Pooka, a purebred border collie who lived here before me, in the picture on the right. 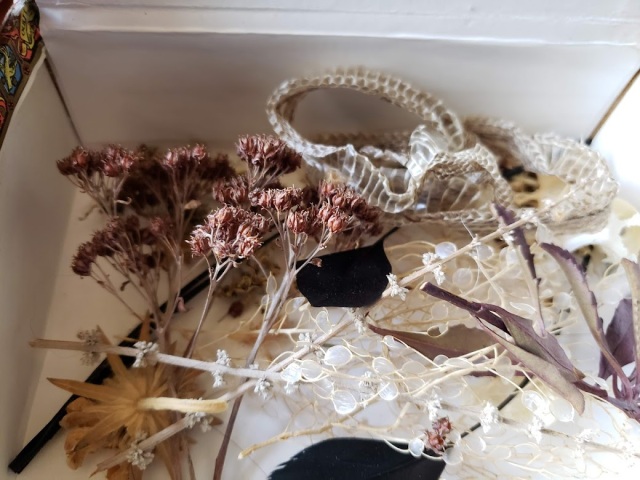 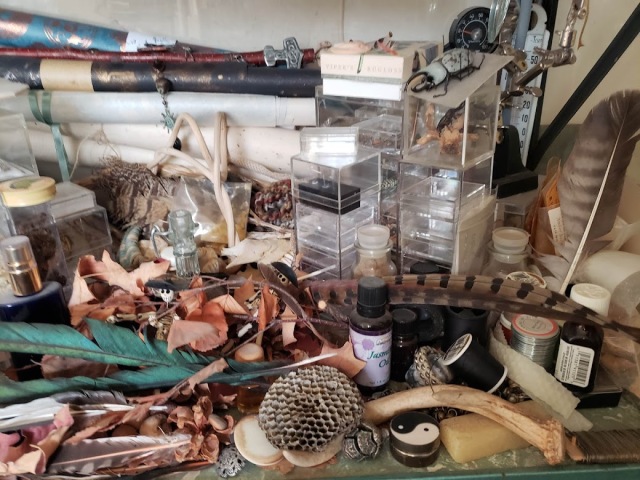 The title of this (I had to ask the guy I live with) is “The little book of tropical wonders.  In many colors.” 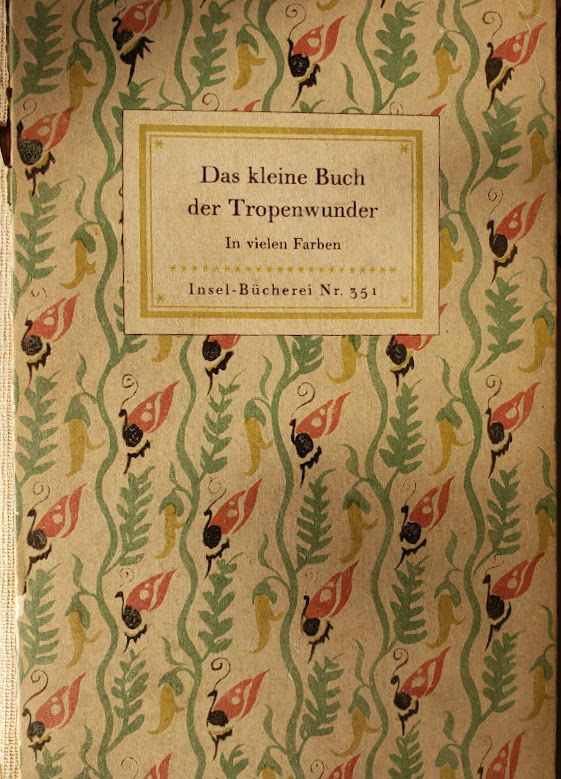 So these are some of the many, many mysterious things that are all throughout my house.

Oh, I almost forgot. I’m supposed to say this, even though it’s a bit immodest.
When it was really cold last week, mice started sneaking into the house. The guy I live with baited several traps, the kind that don’t kill mice but just catch them, with “expired peanut butter”, and, sure enough, we caught a few.
But several evenings ago, I thought I heard, and smelled, something in a trap in the downstairs bedroom. There was. The guy I live with had forgotten that there was a trap down there, and he said if I hadn’t alerted him to the fact that there was a mouse in there, it might have died. He released the mouse into the garage.
The guy I live with rewarded me with extra biscuits, because he said I saved the life of a tiny little mouse.

And we’re not going to move, no matter what. I’m so relieved. 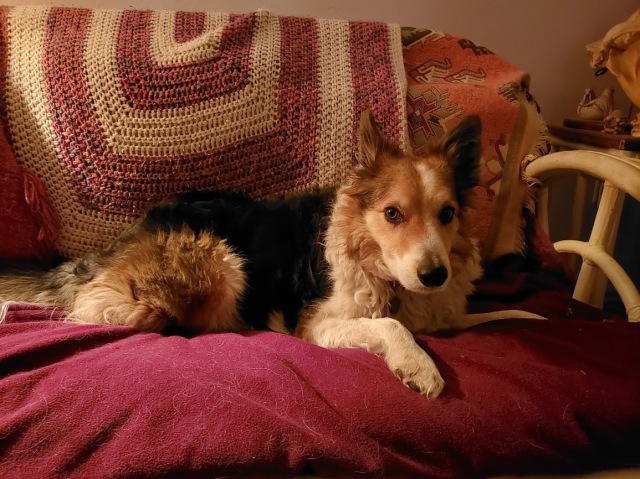 30 Responses to my house