Fortunately for the dog, fireworks have been banned here, though that won’t stop some people from annoying everyone else. The garden was set on fire years ago; that was a lot of fun.

The empty space, on the third day. (Isn’t this fascinating?) I’m having second thoughts about moving the yucca; maybe a ten-foot-tall expression of Ultimate Plant Lethality might make a dramatic statement. Form and texture, and all that. 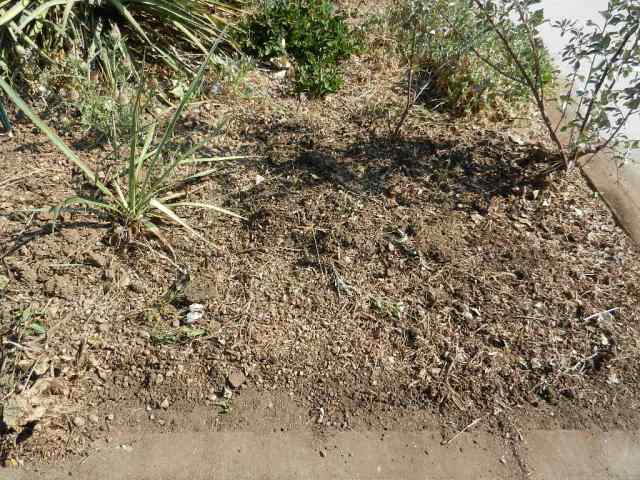 Meanwhile, a few feet away, the hybrid hesperaloe is blooming. Hesperaloes need water, preferably, here, in the form of rain, some time in April or May in order to create flower buds. Once that has happened, the plants will bloom all summer regardless of the amount of water they receive after that.

I suspect it’s Hesperaloe parviflora crossed with H. funifera. You can see that the leaves have more “threads” than regular parviflora, and that the inside of the flowers is less yellow. Or more white. Or pinker. Whatever. The former is a mesophyte, not a desert plant, from the black soil prairies of Texas, though it does range south into Coahuila. The latter, which can grow to six feet, is almost exclusively a Mexican species, from Coahuila, Nuevo León, and San Luis Potosí.

note abundance of threads on the hybrid

Funifera means “bearing rope”. Standley, in Trees and Shrubs of Mexico (1920), says “the plant is said to be planted in Nuevo León for the fiber obtained from the leaves. The fiber is long and of excellent quality. It is imported as ‘ixtli’ or ‘Tampico fiber'”. You grow this one because it gets big (also makes a dramatic statement), not really for the flowers. It’s hardy here (meaning here, in my garden).

The cage, barely visible at the bottom, is to protect it from rabbits, who love to gnaw on hesperaloes. (They ate ‘Brakelights’ right down to the ground this past winter.) The cage is just as effective in preventing rabbits from eating the plant as sitting under our desks at school would have been, back in the Fifties, in case an H-bomb were dropped.

2 Responses to a quiet Fourth, hopefully