Today, staring out the kitchen window, the way I always do, I noticed a white-breasted nuthatch that wasn’t moving. I thought this was odd, because they’re almost always moving, flitting around as though caught in a freeze-frame, so I grabbed my camera, prepared for disappointment. They usually fly away the instant I point a camera at them, but not today. 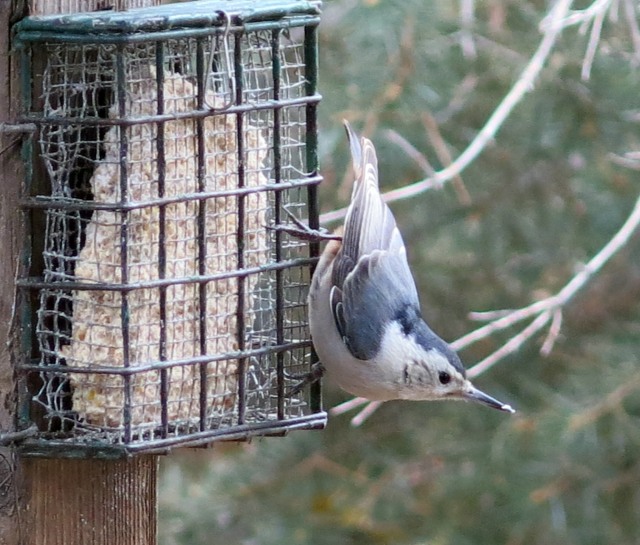 Still not moving, I took another picture.

I wondered if the bird had died right there on the suet feeder, with its funny little feet caught in the wire, and a dewdrop of suet on the end of its beak.

But no; it did move eventually.

I can be slow at times. Here I thought the little nuthatch, after weeks of frustration, was finally posing for me, but then I realized that there weren’t any other birds moving in the garden either. There was quite a bit of commotion about halfway down the garden, though.

So my poor little nuthatch was frozen in fear because a Cooper’s hawk had crashed through the lilacs, and a red-tailed hawk was eyeing it from the cottonwood.

I wonder if my plants feel the same way when I walk up to them.

idle
View all posts by paridevita →
This entry was posted in Uncategorized and tagged Cooper's hawk, red-tailed hawk, white-breasted nuthatch. Bookmark the permalink.

4 Responses to feeding the birds again