what have you done?

Hard to believe, looking at things now, that the garden (this one) was scheduled to be on the Garden Conservancy tour back in 2009. It must have looked nice then.
This is the front bed after doing a little bit of work yesterday. The hellebores have been moved, but the tree peony is still there. I had to backfill the dirt around it after discovering the true nature of its root system.

Imagine having a herd of people walk up the cracked and spalled driveway, only to be greeted by this. I have big plans for this little space….big plans….but meanwhile it’s an affront to everything noble and beautiful in gardening.

“Oh, what have you done? I loved this little garden!”

No, what I thought I would do is spread some white quartz, and put a couple of painted tires here, as planters. I could fish the tires out of the canal a hundred yards to the north of here; the locals tossed them in there “to attract bass”. I’ll paint the tires blue and plant red petunias in them. Everyone loves a patriotic theme. 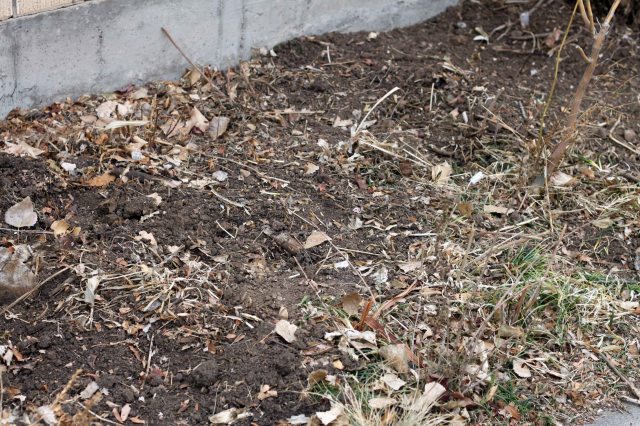 the stick is the “desert bird of paradise”, Caesalpinia gilliesii. still alive, too.

All of the dirt (best not to dignify it with the word “soil”) in this bed has to be removed. Well, it doesn’t have to be, but is going to be removed, and at first I worried that I would have yet another pile of dirt on my hands that I didn’t know what to do with, but now I realize I can dig out this bed, and fill in the pool in the back yard.

The Rock’s tree peony was Cindy’s favorite plant; she took hundreds of pictures of it, and coddled it by covering the plant when frost threatened. She also wanted to draw it, but that project got sidetracked.
I have a nice, tree-peony-friendly spot for it, in nice soil, where it will get some water, and a little shade. I only need to dig a hole six feet wide and six feet deep to get it out.

There is a little greenery on the north side of the house.

In the middle of admiring the first flush of snowdrops, the weather changed. Not for the better, the way I see it, but it changed. The spring call of the red-winged blackbirds is audible in this movie.

idle
View all posts by paridevita →
This entry was posted in Uncategorized and tagged snow, snowdrops. Bookmark the permalink.

6 Responses to what have you done?