Hello everyone, it is I, Chess the purebred border collie, once again. You may remember me from such utterly delightful posts as “Stinker’s Revenge” and “Disgrace of the Week”. If not, I suggest you go back and read those, to get an idea of what a border collie can contribute to our modern lifestyle. Here I am looking quite agreeable. There’s a reason for this, which I’ll get to in a minute. Today’s post, by the way, doesn’t have very much gardening in it. 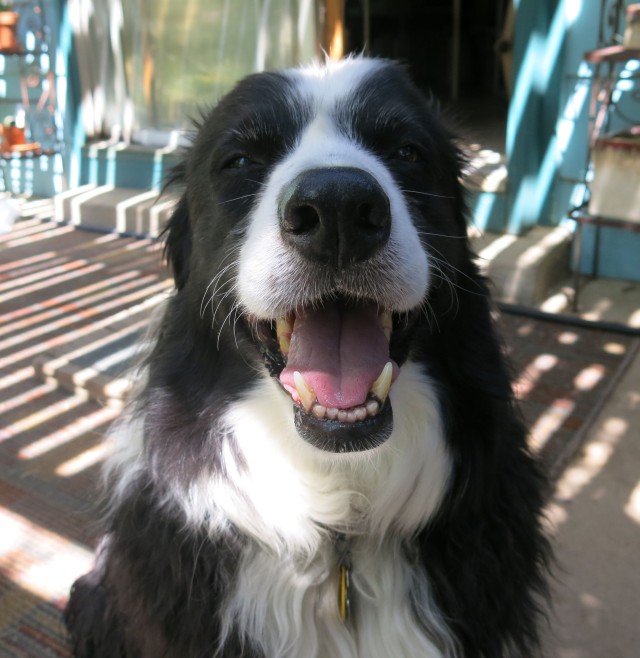 It was really hot today. Like 95 degrees and eleven percent humidity. Hot. The guy I live with said it could have been hotter, and the humidity could have been higher, which would no doubt have made me even more miserable than I was today. He said something about “dry heat”. I think it’s dry heat inside the oven, too, but I don’t want to be in there, so I don’t understand what he was talking about.

The guy I live with didn’t do much gardening today. He might not have done any, actually. He did take a picture of part of the garden to give a sense of the sun and heat. 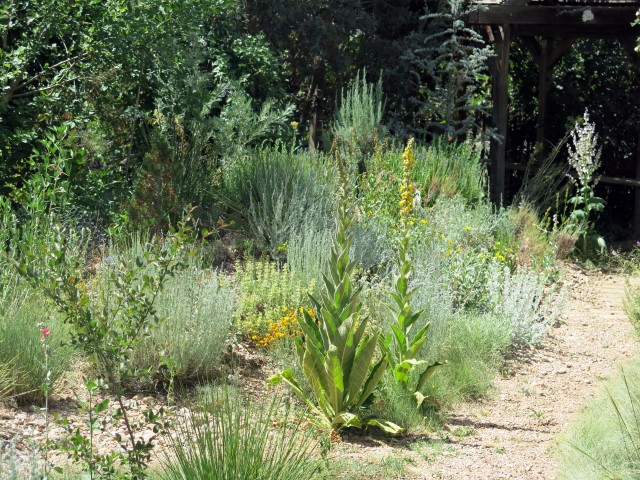 That’s Verbascum densiflorum in front there. That’s the gardening bit for today. One picture.

Well, there are other things in life besides gardening. This is where I introduce the Philosophical Corner, and at the same time have a little bit of fun at the guy I live with’s expense. I don’t think he minds that much.

For about a month now, he’s been fretting about having to renew his driver’s license. (He’s getting old.) He kept putting it off, and he claimed that it was because he didn’t want to be down at the DMV (Department of Motor Vehicles) while I was in the house and it was thundering outside. That sounded really altruistic and stuff, but really, he was just putting it off. They call that procrastination, which is from the Latin word cras, meaning tomorrow. I never think about tomorrow, and I know the guy I live with doesn’t either, so I don’t know why he didn’t just go do it.

Today he decided to. First he called his sister and left a message saying that if he wasn’t heard from in several days, he was standing in line at the DMV, and that I needed to have breakfast and my dinner was served at 3:47 p.m. Not 3:48 mind you. And I went on walks twice a day and slept on Pottery Barn sheets with the fan blowing cool air all over me. And got hosed off if it was hot.

I didn’t much care for the idea of “several days”, since I need breakfast every morning, and I can’t open the back door by myself. But I had this idea that someone would come to rescue me, since I am notoriously agreeable.

Anyway, he went. I think there was a tear of farewell in his eye. I know he doesn’t mind standing in line, since he isn’t anyone special, and doesn’t think he is (though I like him), but he does miss doing these things with my mommy. They did everything like this together. And now he had to do this alone. He had visions of Patty and Selma waiting for him behind the counter. He told me he might be gone for a long, long time.

An hour later, he was back home. The whole thing took eight minutes. Eight minutes. And everyone there was extremely nice. 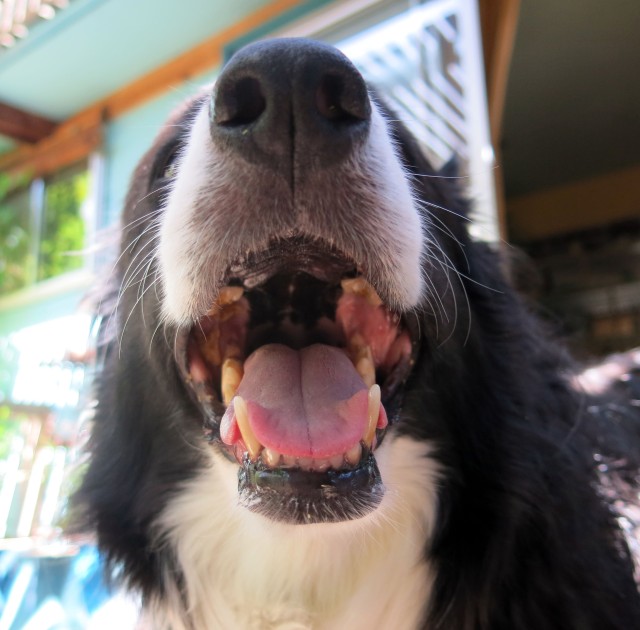 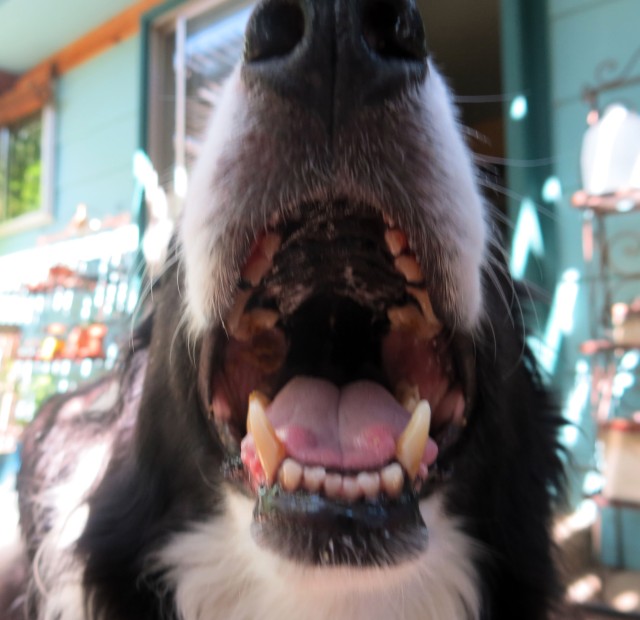