“in the electric heat hypnotised”

Hello everyone, once again it is I, Chess the purebred border collie, filling in for the guy I live with. You may remember me from such superior posts as “Disgrace of the Week” and “Last Seen Wearing”.

It is extremely hot. I’m so hot I’m starting to wonder why the guy I live with hasn’t bought an air conditioner for me. Yesterday, on our afternoon walk, it was so hot the guy I live with thought I was going to collapse, and asked me if my paws were burning on the canal road. I think they were.

Here I am looking just about as sad as a border collie can look. It’s 93 degrees and 13 percent humidity. Yes, I know it can get hotter here.

The guy I live with has been brushing me to get rid of my undercoat, and soaking me with the hose, and he says that Denver Water has lifted their Stage Two drought restrictions and so maybe, just maybe, he’ll set the sprinkler long enough so that I can play in it.

He could also buy me a swimming pool. Not that I would necessarily use it, but it would be a nice gesture. Maybe an inflatable one. The guy I live with talks about how he can still smell what inflatable swimming pools smelled like about 1956. Isn’t that interesting. I’m really, really, really hot, and I don’t much care about 1956. And I can quote T.S. Eliot and not spell hypnotized like an American, which Eliot technically was, but didn’t want to be. I’m a border collie and I don’t want to be so incredibly hot, so I can understand that.

Oh, there is gardening of some sort going on. The guy I live with says he’s thinking about gardening. He’s thinking. Look out, right? He showed a picture of this cypress back when it was in the greenhouse at Timberline, and now it’s here. The cypress, not the greenhouse.

There are already a lot of cypresses here, but I guess another one was needed. There are several Arizona cypresses, some small

and some not so small

and they’re all variety arizonica, or so he says. He claims that you can tell by the bark. 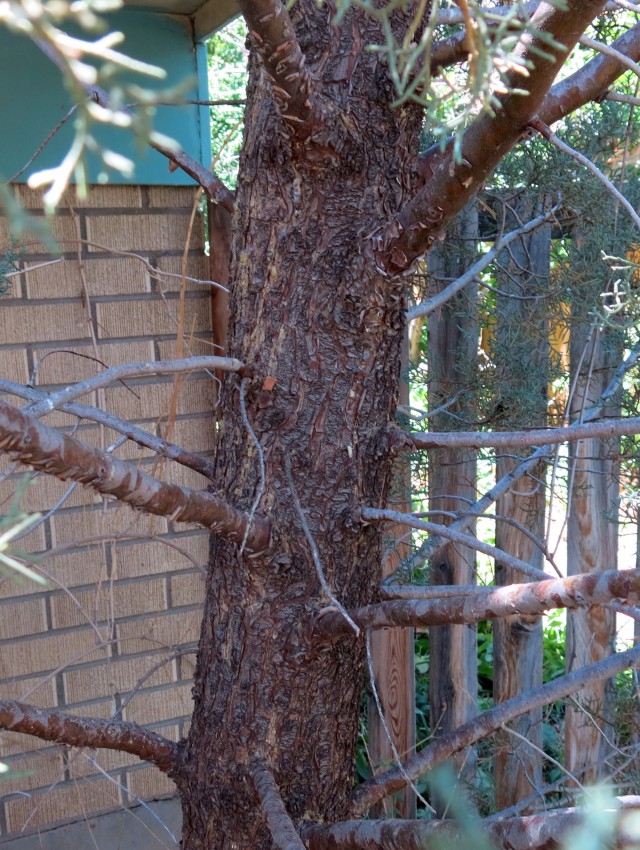 I can tell a lot of things by the bark, but nothing to do with cypresses. Anyway, the one in the pot. It’s Cupressus montana from Baja California. That’s right, Baja California. It’s been hardy at Denver Botanic Gardens for quite some time. The guy I live with says it’s going in the “Baja California Garden”, but he didn’t show me where that is. I didn’t know we had one.

Some botanists call this cypress Cupressus arizonica var. montana, but the guy I live with says that takes all the fun out of it. 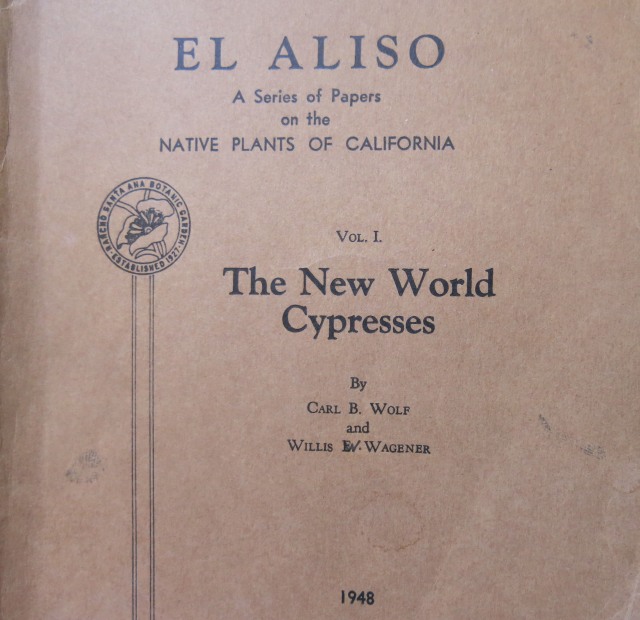 Well, according to Mr. Wolf, Cupressus montana is confined to the Sierra San Pedro Martír in Baja California, and “although it is not common over the whole area, yet in certain localities it is by no means rare, some of the small canyons at an altitude of 2,200 to 2,400 meters supporting considerable stands of this cypress.” The key distinguishes this species thusly: “ovulate cones opening soon after maturity (same fall or winter) and shedding their seeds which are strictly non-glaucous.”

Okay then. It must be different.

I’m not sure how he plans to get this little tree over the winter, because quite often  little cypresses are badly damaged in winter, and rarely recover, whereas much larger, healthy ones are no problem. He says he might bring it in for the winter until it gets bigger. He also says that the bigger the plant, the more resources it has to keep it alive after a rough winter. We’ll see what happens.

Right now it’s hard to imagine that there is such a thing as winter. It’s still really hot.  I don’t know why it has to be so hot, but the guy I live with says it just does.

He felt sorry for me and gave me a biscuit. That changed my mood a little.

Here’s hoping it cools off in the next few days like they say it will, but without any scary thunder.

idle
View all posts by paridevita →
This entry was posted in Uncategorized and tagged Cupressus montana. Bookmark the permalink.

9 Responses to “in the electric heat hypnotised”